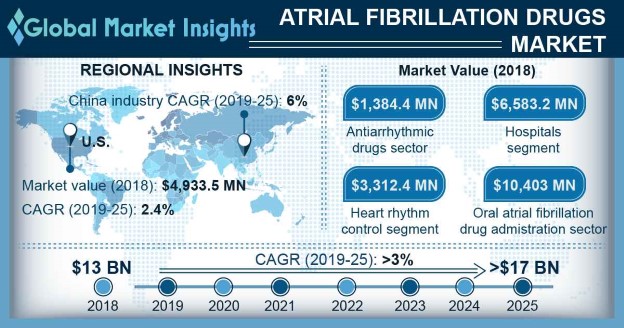 Atrial fibrillation drugs market is expected to witness lucrative growth over the forecast period. Increasing rate of geriatric population coupled with rising prevalence of valvular diseases will augment the market growth. Moreover, increasing rate of population suffering from diabetes is another factor fueling the growth of atrial fibrillation drugs market. Increasing prevalence of cardiovascular diseases in emerging regions owing to rise in sedentary lifestyle and increasing habit of binge eating will fuel adoption rates in developing as well as certain developed countries.

However, drug side effects will be one of the major reasons hindering the adoption rates in few developing and under-developed countries. Drug side effects such as severe bleeding, tiredness, etc. will continue to hamper market growth over the forecast timeframe. Also, lack of awareness about recent medical drug therapies for the treatment of atrial fibrillation in certain emerging regions might hamper the market growth. 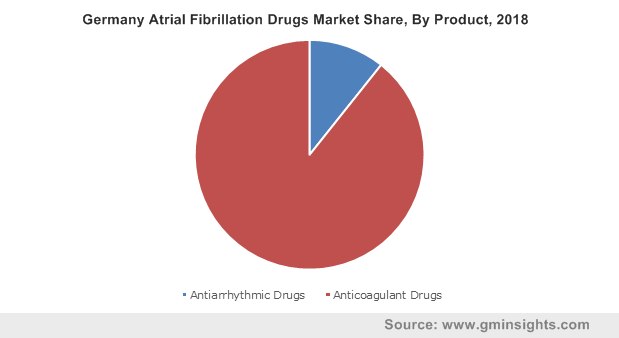 Application of atrial fibrillation drugs in heart rhythm control was valued at around USD 3,312.4 million in the year 2018. Many patients suffering from atrial fibrillation require restoration of sinus rhythm to improve their quality of life. Maintenance and acute restoration of sinus rhythm in patients with atrial fibrillation are denoted as rhythm control. Antiarrhythmic drugs are generally suggested as a first-line therapy and drug prescription is done on the basis of absence or presence of structural heart disease or heart failure, renal function, and other comorbidities. It has been identified that increase in geriatric population is boosting the demand of atrial fibrillation drugs, since they are more prone to perturbations associated with heart rhythm.

Oral atrial fibrillation drug administration market was valued around USD 10,403.0 million in the year 2018. The prevalence of atrial fibrillation across the globe is increasing at a rapid pace, especially with growing age of the population. Patients with thromboembolic stroke due to atrial fibrillation have higher morbidity, mortality and longer hospital stays compared to patients with other form of strokes. The most prescribed drug therapies for the prevention of atrial strokes are oral drug therapies owing to its effectiveness in prevention of blood clotting thus, augmenting the market growth.

Application of atrial fibrillation drugs is highest in hospitals resulting in major market share. The hospitals segment accounted for around USD 6,583.2 million revenue in the year 2018. A substantial proportion of atrial fibrillation drug therapies happen in hospital settings; thus, demand for these drugs are the highest. During the forecast period, the hospital end-use market segment will continue to lead, owing to increasing availability of drug therapies in hospital settings coupled with rising supply agreements of drugs between manufacturing firms and hospitals.

Cardiac centers held significant industry share in 2018, being the most preferred setting in developed as well as developing countries. The cardiac centers segment is forecasted to expand at a healthy CAGR of 3.8% over the forecast period. Hence, adoption of oral drug treatments in cardiac centers should propel industry growth. 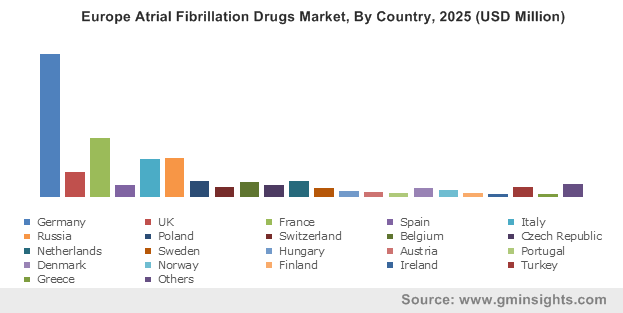 U.S. dominated the North America atrial fibrillation drugs market, accounting for around USD 4,933.5 million in the year 2018. The U.S. captured the largest share of the global market due to increasing geriatric population coupled with rising prevalence of valvular diseases among the population. Moreover, increasing number of drug manufacturing companies such as Johnson and Johnson and Bristol-Myers Squibb will further augment the growth of U.S. atrial fibrillation drugs market.

China atrial fibrillation drugs market will observe rapid growth rate of 6.0% over the forecast period. The growth is attributed to development of hospitals and growing acceptance of private clinics in the region. Furthermore, prevalence of cardiac diseases due to sudden transition in lifestyle and increasing instances of binge eating have boosted the industry growth.

Atrial fibrillation is identified as one of the common cardiac diseases among individuals owing to various factors such as rise in prevalence of chronic diseases, obesity, hypertension, increasing rate of tobacco intake, alcohol consumption, coupled with high adoption rate of sedentary lifestyle among the social classes. However, clinicians introduced warfarin as the first anticoagulant drug treatment for atrial fibrillation. Although due its few shortcomings, the adoption rate had dropped, and various other anticoagulant and antiarrhythmic drugs were introduced in the market. To address the unmet needs globally, few multinational companies started investing in the research and development of atrial fibrillation drugs across the world. With ever growing need in the face of growing cardiac diseases, numerous drugs were launched in the market. Most of the atrial fibrillation diagnosed cases are in the initial stages and do not need catheter ablation, hence atrial fibrillation drugs are preferred over other treatments.