Artificial Intelligence Chipsets Market size exceeded USD 8 billion in 2019 and is estimated to grow at around 35% CAGR between 2020 and 2026. Smart devices and technologies that have AI Chipsets can possess massive potential to gather trillions of data from IoT devices and sensors, driving the market growth. 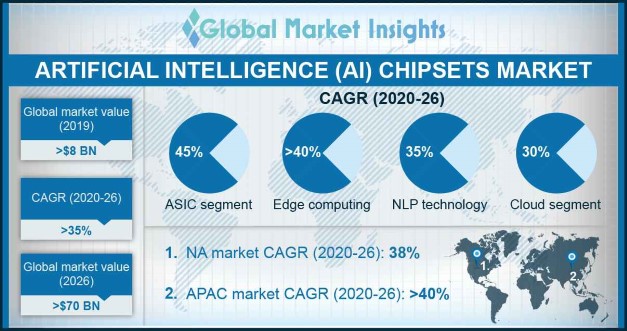 Several initiatives for development of smart cities will propel the demand for AI chipsets. In November 2019, BCB Blockchain announced to sign a memorandum of agreement (MoA) with Manila to facilitate a local startup in the Philippines, focusing on smart city projects.

Furthermore, market players are also coming up with innovations to gain a competitive edge. For instance, in November 2018, Huawei announced the development of an AI digital platform for smart cities, combining IoT, big data, converged communications, cloud, and security.

The GPU product segment dominates the market with over 40% share in 2019. The growth is attributed to its features such as high performance, low latency, and low cost. Also, improved computing power and high parallel processing capability have encouraged its increased adoption in several AI applications.

Enormous growth in gaming applications with rising demand for high 3D graphics have resulted in increasing integration of AI, machine learning, and other disruptive technologies. According to a report generated by Our World in Data.org, in 2018, the adults in the U.S. spend more than 3.6 hours in mobile, 3 hours in desktop, and 0.7 hours in other connected devices including game consoles; therefore, companies are investing highly in research and development activities to gain high market traction.

The key players are focusing on research & development activities to provide better technically advanced products compared to their competitors. Several tech giants including AMD, Arm Inc., and Apple Inc. have built their AI Chipset designs on GPUs incorporated with the core CPU.

For instance, NVIDIA is facing fierce competition in the core GPU segment in terms of smart devices, IOTs, and other cutting-edge technologies. Intel Corporation, the leading AI chipset manufacturer, acquired Nervana, which is a small AI software firm based on accelerator GPU chip. This will accelerate the market opportunity for GPU in the industry. 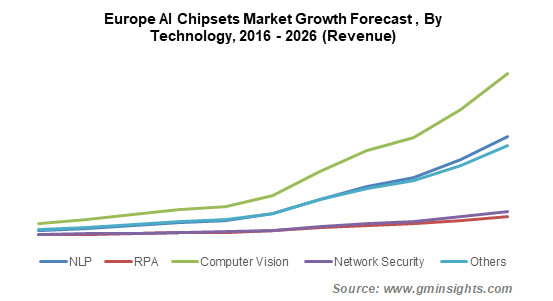 The NLP segment held around 25% artificial intelligence chipsets market share in 2019 and is anticipated to register 35% gains from 2020 to 2026 owing to rising implementation of speech recognition systems in various applications such as smart speakers, automotive infotainment systems, and voice-controlled remote systems. For instance, Amazon Alexa and Google speech recognition use natural language processing for virtual assistance.

The growing integration of voice recognition systems has resulted in an increase in the development of more enhanced NLP with AI integration. For example, in November 2019, Microsoft unveiled the development of pre-trained deep-learning NLP model for automatic conversation response generation. These models use unsupervised learning for large datasets such as Wikipedia contents. Adding to this, in November 2019, Google applied its latest NLP algorithm BERT to improve its search engine capability. 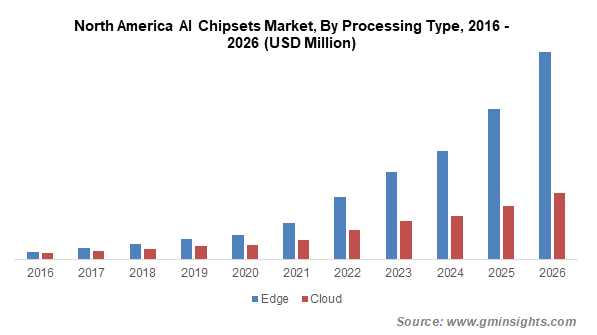 The cloud segment accounted for a market share of over 40% in 2019 and is likely to expand at 30% through 2026. The growth can be credited to increasing use of technology in data centers and workstations. The adoption of cloud computing has reduced operational cost and enhanced efficiency, driving the AI chipsets market size.

In September 2017, Amazon announced its plan to invest USD 924 million in Indonesia for data center facilities in the next 10 years. The company is planning to introduce its cloud computing unit to Amazon Web Services in the Indonesian market.

The media & advertising segment is projected to grow at a modest rate through 2026 led by increased spending of consumers in social media applications such as Facebook, WhatsApp, and Twitter. Also, AI chipsets in advertising are used to detect the pattern and scale up advertising data in real time, driving the market value.

To enhance user experience in these social media platforms, companies are focusing on integrating AI chipsets into their processors. In February 2019, Facebook announced to develop its own AI chip to offer faster computing capability for digital assistant. The company is developing its ASIC chip that supports artificial intelligence software. This will accelerate the demand for AI chipsets in media and advertising applications.

The Asia Pacific artificial intelligence chipsets market size will witness a growth of over 40% during the forecast timeline. This is due to emerging AI startup companies in China such as Cambricon, Bitmain and Horizon Robotics, Inc. In 2017, more than 100 startup companies from China were listed in worldwide stock markets, and China has a total of 270 companies in its unicorn stock (less than 10 years and valued for USD 1 billion or more).

Several initiatives by the Chinese government will also propel the market growth in the country. For example, in July 2017, the State Council of China launched the “New Generation Artificial Intelligence Development Plan”, which focuses on the acceleration of the domestic AI industry to approximately USD 150 billion by 2030.

For instance, in August 2019, Huawei Technologies launched Ascend 910, which is a powerful AI chipset processor based on System-on-Chip (SoC). The chip is designed to be implemented in data center applications to compete against U.S. technology companies such as Qualcomm Technologies and NVIDIA.

The AI chipsets market research report includes in-depth coverage of the industry with estimates & forecast in terms of revenue in USD from 2016 to 2026 for the following segments:

The market size of AI chipsets surpassed USD 8 billion in 2019.
The industry share of AI chipsets is poised to grow at 35% CAGR between 2020 and 2026.
The Asia Pacific market will witness a growth of over 40% during the forecast timeline due to emerging AI startup companies in China such as Cambricon, Bitmain and Horizon Robotics, Inc.
Leading market players include Samsung Electronics, Huawei Technologies, NVIDIA, Advanced Micro Devices, Qualcomm Technologies, Microsoft, and Intel Corporation, Google.
The GPU segment dominated the market with over 40% share in 2019, says this research report by GMI.
The media & advertising segment is projected to grow at a modest rate through 2026. The growth is attributed to increased spending of consumers in social media applications such as Facebook, WhatsApp, and Twitter.