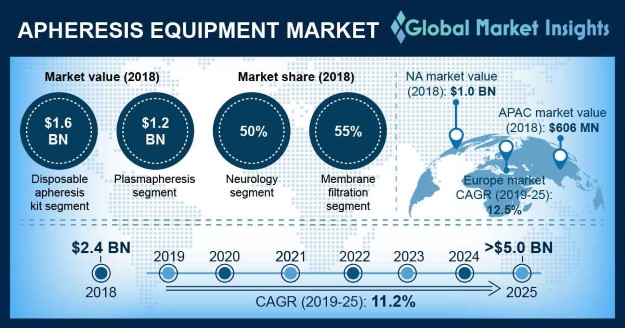 The rising prevalence of blood related disorders in developed economies is a major factor stimulating the apheresis equipment industry growth. Blood disorders affect the blood clotting ability of an individual ranging from any age group including infant, adult and elderly population. Moreover, growing population base in Europe are highly susceptible to various blood related disorders such as hemophilia A, hemophilia B, thalassemia and sickle-cell disease among others, thereby augment huge demand for apheresis devices. Additionally, occurrence of rare disease is also known as haemoglobinopathies, which can be addressed by apheresis technique. This could further offer several opportunities for apheresis equipment in healthcare.

Disposable apheresis kit segment is anticipated to show over 10.4% CAGR during the forthcoming years. These kits play a crucial role in conducting patients with thrombocytopenia and severely weakened platelet function. Availability of premium quality of kits for effective patient management should foster segment growth.

Apheresis machines segment was valued around USD 746.8 [SM2] million in 2018 and is estimated to grow considerably by 2025. Apheresis machines are safe and widely used in transfusion treatment. In addition, the presence of superior class of machines further helps in separating several blood components, thus augment apheresis devices business demand.

Photopheresis segment held over 22% revenue share in 2018 and will exhibit lucrative growth over the coming years. It is an extracorporeal technique for separating white blood cells (WBC) from blood. This type of procedure is crucial in the treatment of T-cell lymphoma (CTCL) and graft-versus-host disease (GvHD) for providing better patient care, thus propel segment demand.

Leukapheresis segment was valued more than USD 150 million in 2018. This procedure is widely performed in combination with chemotherapy to control the number of leukocytes in the blood cells. Additionally, it is used to treat severe neutropenia that should favor apheresis devices industry demand.

Membrane filtration segment is expected to demonstrate around USD 1.3 billion over the analysis timeline. In this technique, blood is pumped through the membrane which is made up of thin layer of semi-permeable material that separate blood components from plasma. This technique deliver accurate results thereby boosts segmental growth.

Centrifugation segment was valued more than 40% revenue share in 2018 and is expected to raise noticeably by 2025. Several benefits associated with centrifugation technology such as, it can function effectively at low temperatures and is relatively simple to scale up, this would directly contribute for industry growth.

Europe market is predictable to show around 12.5% CAGR over the analysis period. The rising demand for technologically advanced automated products along with favorable reimbursement policies, is the key factor driving the demand for apheresis equipment in this region.

Asia Pacific apheresis devices industry was valued around USD 606 million in 2018. The increasing incidence of blood related disorders in emerging economies due to altering health habits should stimulate the regional market growth. Also, improving investments in the healthcare industry and growing number of skilled practitioners will thereby enhance business growth. 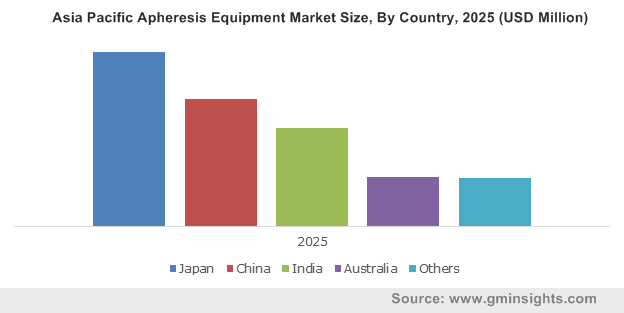 History of apheresis equipment can be traced back in 1877 by de Laval with introduction of apheresis. Efforts to supplement the apheresis with technology can be dated back in 1950s by Cohn and Latham and Freireich and Judson (IBM) in 1960s. Apheresis is a therapeutic technology in that the plasma or blood of an individual is transferred through an apparatus that further splits into particular constituent and then returns the remainder to the circulation. It was introduced to increase the productivity with higher quality products and improved experiences along with smart connectivity making software applications more effective. Advent of technology in apheresis equipment to introduce technologically advanced devices for effective patient management surges huge demand for apheresis devices among population. Thus, increasing demand for apheresis devices will drive industry growth during the forthcoming years.