Global Anti-corrosion Coatings Market size was USD 13.5 billion in 2020 and will showcase a growth rate of around 4.3% CAGR from 2021 to 2027. Growing anti-corrosion coatings demand in tag and label applications will augment the market growth during the assessment period.

Anti-corrosion coatings are a unique class of materials, characterized by excellent impact resistance, plus corrosion, and abrasion resistance. These coatings can be epoxy-based, water-based or in powder form. These coatings aid in creating a barrier between the metal surfaces, thereby protecting the substrate from any kind of corrosion. 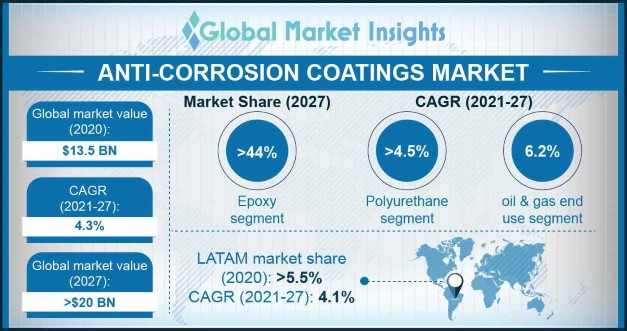 Anti-corrosion coatings also play a vital role in the energy industry including oil & gas, coal, nuclear, biomass, hydro, and other renewable energy sources. Anti-corrosion coatings provide protection to the equipment used in the energy industry from extreme weather conditions. Additionally, developing nations are likely to depend more on conventional sources of energy generation such as coal power and crude oil derivatives.

Epoxy to dominate the market during the forecast period 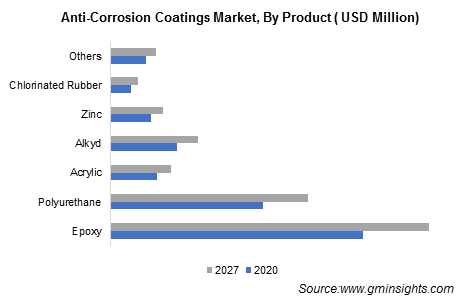 Epoxy was the largest segment in 2020 and is projected to continue leading throughout the assessment period. Epoxy anti-corrosion coatings is projected to hold a market share of over 44% by 2027 in terms of revenue. These coatings are widely used owing to their excellent chemical resistance in varied environments. Epoxy coatings possess excellent protection when exposed to harsh environmental environments and hence are widely used in the marine industry.

Polyurethane was the second-largest segment in 2020 and is projected to exhibit a CAGR of over 4.5% during the assessment period. Polyurethane is projected to generate a revenue of over USD 5 billion by 2027. Polyurethane anti-corrosion coatings are used across various end-user industries owing to their excellent properties such as fast cure time and durability.

These coatings are widely used near marine areas. These are mainly used to prevent the corrosion of substrates and avoid loss of metal. These resins have enhanced solvent & chemical resistive properties and are superior to conventional epoxies in acid resistance. Polyurethane finish coats are very durable with effective gloss retention ability and are non-yellowing in nature. Additionally, water-based polyurethane coatings are also non-flammable making them highly desirable in combustible environments. 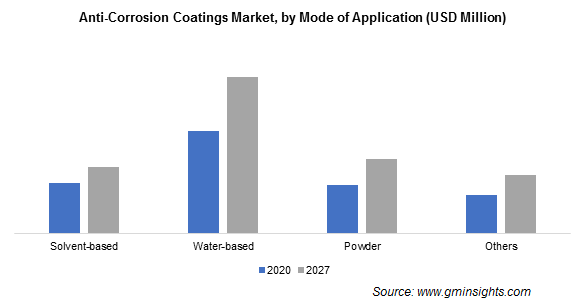 The water-based segment was the largest segment in 2020 and is estimated to continue leading throughout the assessment period. The presence of various environmental regulations on the use of solvent-based coatings led to the increasing use of water-based coatings, in turn, adding to the market revenue.

Moreover, with more and more emphasis on environmental-friendly coatings, various industry participants are seen to invest in research & development activities for the development of efficient and durable water-based anti-corrosion coatings. Solvent-based & powder are other major segments and are projected to record an encouraging CAGR throughout the forecast period. The water-based segment regenerated a revenue of over USD 5.7 billion in 2020 and is anticipated to hold a market share of over 45% by 2027.

Infrastructure will drive the business growth

Among the various application sectors, the infrastructure end-use segment will dominate the overall anti-corrosion coatings market share over the projected timeline. The dominance is due to growing population and rapid investments in the construction sector across the globe.

Anti-corrosion coatings are widely used in the infrastructure industry owing to their growing need to prevent the corrosion of metal structures. Steel and metal structures are widely prone to harsh environmental conditions and hence are coated in various combinations of anti-corrosion coatings to extend their durability. The infrastructure segment held a market share of over 19 % in 2020.

Asia Pacific was the largest and fastest-growing region in the anti-corrosion coatings market in 2020 and is expected to record the fastest-growing CAGR over the forecast duration. China led the Asia Pacific market, in terms of production and consumption. Some of the huge multinational giants and manufacturing ships have production bases in China, making it a major exporter to the rest of the world. Anti-corrosion coatings have a huge demand in Asia Pacific, particularly in South Korea, Japan, and China, due to the extensive demand from the shipping, energy, and infrastructural industries.

North America and Europe are expected to witness a moderate growth rate over the forecast timeframe. Growth is attributed to the presence of huge and mature ship manufacturing & other industrial sectors. Latin America will be witnessing prominent gains during the assessment period due to growing trade activities of Brazil & Mexico with the rest of the globe. North America held a market share of over 14% in 2020 whereas Europe held a share of over 23% in the same year.

The global anti-corrosion coatings market report includes in-depth coverage of the industry with estimates & forecast in terms of volume in Million Square Meters & revenue in USD million from 2017 to 2027 for the following segments:

The anti-corrosion coatings industry size crossed USD 13.5 billion in annual revenue in 2020 and will witness a 7.8% CAGR up to 2027 owing to increasing adoption in tag and label applications.
The market for epoxy anti-corrosion coatings is expected to record a revenue share of more than 44% by 2027 owing to higher usage on account of their excellent chemical resistance in varied environments.
The infrastructure end-user segment held over 19% in 2020 and will grow with the expanding population and rapid investments in the construction sector across the globe.
Asia Pacific accounted for a major share in 2020 and will grow at a CAGR by 2027 due to higher regional demand from the shipping, energy, and infrastructural industries.
Customize this Report
Inquiry Before Buying