Aircraft Tires Market size exceeded USD 2.8 billion in 2019 and is estimated to grow at over 2.9% CAGR between 2020 and 2026. Rising number of domestic and international air passengers will stimulate the market growth.

Aircraft tires are made from natural rubber and are designed to withstand extreme load during airplane landing, some of the major tire sizes available in the industry include, three-part, Tire VI, Tire III, etc.  Rising production and usage of aircrafts has led to higher maintenance cycles of aircrafts across the world, boosting the market revenue. 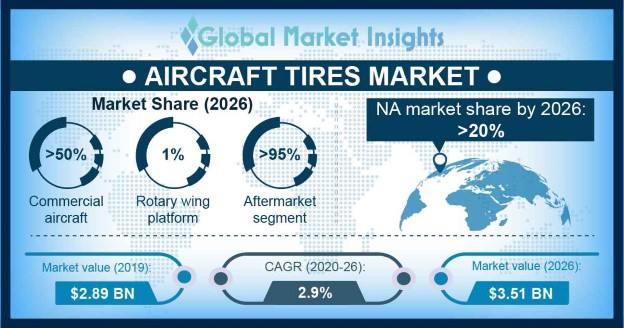 Increasing air travel demand across the world is likely to be a key growth driving factor for the market. According to International Air Transport Association (IATA), the number of passengers traveling by commercial airlines stood at more than 4 billion in 2018, which is set to grow significantly in the coming years.

Another key growth enabling factor is increasing production of narrow-body aircraft. Conventionally, these aircrafts have been used for short & medium haul travel distance. However, technological advancements have made it possible to use them for long haul distance over the past few years.

Apart from these, increasing domestic and international economy travel demand is creating need for more efficient aircraft, which will further grow the narrow-body aircraft production, driving the aircraft tires demand.

The key restraint to the industry is increasing prices of raw material. These tires are made up of different raw materials such as rubber, cord, nylon, steel, etc. Increasing price of rubber will directly affect the final cost of the aircraft tires, which will slow down market development.

Radial tires are expected to grow substantially till 2026 as these tires increase the average number of aircraft landings and have a lower rolling resistance. Radial aircraft tires are composed of fiber strand, which is made of ply fabric that are oriented at 90º of rotation to the tire sidewalls. Growing number of commercial aircraft are likely to enhance demand for these tires in near future.

Tube product segment will account for a significant share of the global aircraft tires market during the forecast period. These products have been used in the past in many small to medium aircrafts.

Commercial aircraft is expected to hold more than 50% market share through 2026. Wide-body aircraft will be likely to have a majority of share among commercial segment as it needs large number of tires as compared to other aircrafts.

Rotary wing aircrafts will account for approx. 1% market revenue share by 2026. The key reason behind this will be low popularity of wheeled helicopters which are primarily used in military applications such as emergency services, surveillance, combat operations, etc. However, these helicopters offer better fuel economy and higher speed over long distances, which will stimulate product demand in rotary wing segment.

Aftermarket end-user segment will dominate the market with more than 95% share in the projected timeframe. This is owing to high frequency of tire replacement of an aircraft in a year. Apart from these, increasing air travel demand across the world has created the need for a greater number of aircrafts, which has further increased average flight hours of an aircraft in the past few years.

Main position segment dominated the total market share. Aircraft tires fitted at main part are usually larger in size as they carry majority of the load of an airplane during landings and takeoffs. High frequency of tire replacement owing to shorter average aircraft landing cycle will increase usage of product in main position. 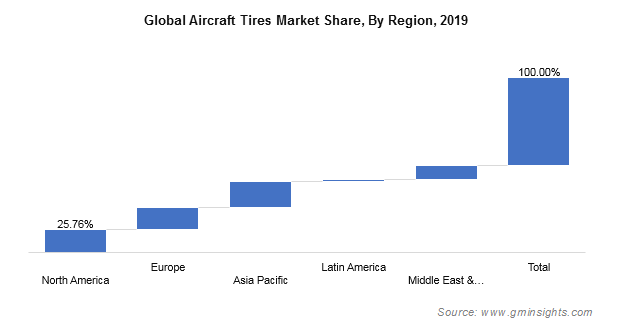 North America aircraft tires market will hold more than 20% revenue share throughout the forecast period. Presence of large number of aircraft manufacturers in the region are likely to propel the market revenue. Apart from these, the region also has large fleet of commercial, regional, business and military aircrafts, which is further expected to boost demand for tires.

Presence of industry consolidation will restrain new entrant over near term

Some of the key manufacturers in the market include Bridgestone, Dunlop, Michelin and Goodyear Tire and Rubber Company. The industry is highly consolidated with key players accounting for majority share. The prominent distributors operating in the industry are Desser, Avioparts, Aircraft Spruce Company, and Sofema.

The market research report on aircraft tires includes in-depth coverage of the industry with estimates & forecast in terms of revenue in USD billion from 2016 to 2026, for the following segments:

The market size of aircraft tires was exceeded USD 2.8 billion in 2019.
The industry share of aircraft tires is estimated to grow at over 2.9% CAGR between 2020 and 2026.
North America market will hold more than 20% revenue share throughout the forecast period due to presence of large number of aircraft manufacturers in the region.
Some of the key manufacturers in the market include Bridgestone, Dunlop, Michelin and Goodyear Tire and Rubber Company.
According to the analysts at GMI, the aftermarket segment domination in the market can be credited to high frequency of tire replacement for an aircraft in a year.
Commercial aircraft is expected to hold more than 50% market share through 2026, says this forecast report by Global Market Insights, Inc.