Aircraft thrust reverser is a part of engine nacelle systems, which are fitted at the exhaust, to efficiently reverse the flow of gases to achieve deceleration. Modern aircrafts are installed with thrust reverser due to growing airliners focus on providing safety to its passengers. These trends are likely to drive the aircraft thrust reverser market revenue. Another key market growth enabling factors are increasing air travel and use of narrow-body aircrafts across Asia Pacific region. 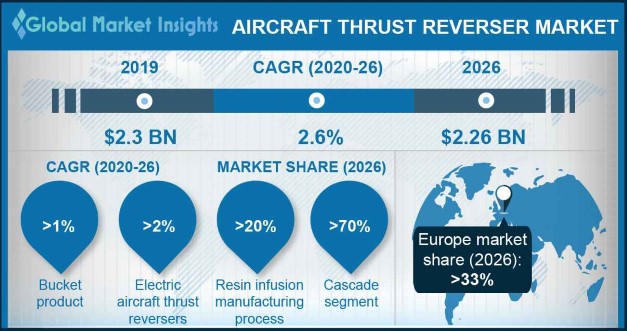 Although the market is gaining significant attention, the challenges associated with its high installation & maintenance cost will slow down the industry growth. Additionally, aircraft industry is also facing stringent challenges from ongoing COVID-19 pandemic. Major aircraft manufacturers have shut down their facilities in the U.S., which is likely to affect the market growth. Also, the pricing of aircraft thrust reverser will affect adversely between 2020 and 2021 owing to sharp decline in the production rate and deliveries of aircraft.

Narrow-body aircraft segment is anticipated to generate more than USD 1 billion revenue by 2026. Aircraft manufacturers are entering into strategic agreements to design and develop thrust reverser for single-aisle aircraft that is boosting the segment share. Moreover, increasing short to medium haul air travel demand across the globe will drive deliveries of narrow-body aircraft, which will further increase penetration of thrust reversers in aerospace sector. 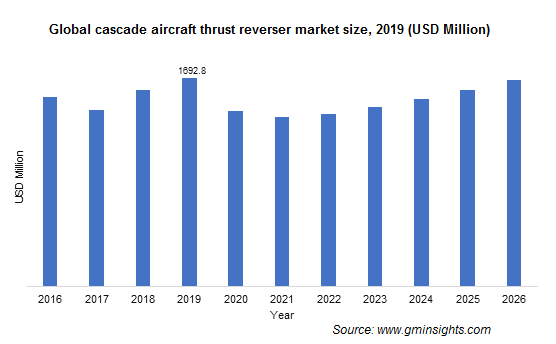 Cascade reverser will account for more than 70% revenue share of the global market through 2026. This dominance can be credited to its features such as enhanced aerodynamic performance and improved aesthetics. Rising production of commercial aircraft is likely to stipulate this product’s demand.

Hydraulic is the leading mechanism segment

Hydraulics segment is poised to dominate the market share during the forecast period. This dominance can be credited to its low installation cost. This mechanism also results into enhanced accuracy during flight takeoff and landings, positively influencing the market revenue. 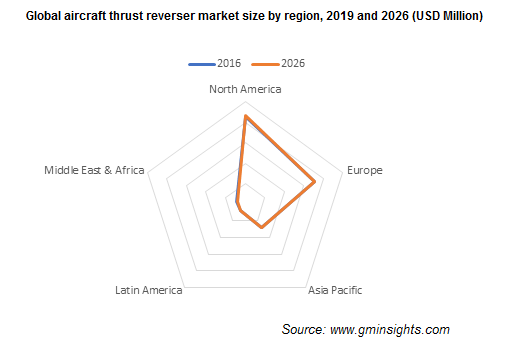 North America is predicted to hold a significant share of the global aircraft thrust reverser market due to increasing aircraft deliveries from the region. The region accounts for substantial share of aircraft production across the world. Furthermore, the presence of large number of aircraft manufacturers is propelling the market growth in the region.

The industry will witness intense competition owing to adoption of aggressive strategies including new product developments, mergers & acquisitions, and portfolio diversification by competitors to gain visibility in the market.

The aircraft thrust reverser market research report includes in-depth coverage of the industry with estimates & forecast in terms of volume in units and revenue in USD million from 2016 to 2026, for the following segments:

The market size of aircraft thrust reverser was valued at USD 2.3 billion in 2019.
The industry share of aircraft thrust reverser is projected to exhibit over 2.5% CAGR from 2020 to 2026.
According to the analysts at GMI, the narrow-body aircraft segment is anticipated to generate more than USD 1 billion revenue by 2026.
Cascade reverser segment will account for more than 70% revenue share of the global market through 2026, says this research report by Global Market Insights Inc.
Major players in the market are Bombardier, Safran, UTC Aerospace System, The Nordam Group, and GKN Aerospace.
North America is predicted to hold a significant share of the global market due to increasing aircraft deliveries from the region. Furthermore, the presence of large number of aircraft manufacturers is propelling the market growth in the region.
Customize this Report
Inquiry Before Buying