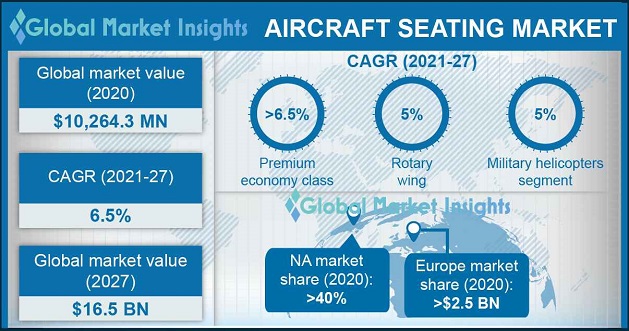 An aircraft seating includes a seating configuration in an airline designed to accommodate passengers for the duration of the air travel. These seats are generally arranged in rows across the aircraft’s fuselage. The increasing cabin density in conjunction with space limitations is providing a positive outlook for the market growth. The increasing prominence of replacement and refurbishment of aircraft seats is further augmenting product penetration.

Recent advancements in manufacturing technologies to increase productivity and seating performance, in terms of stress and fatigue resistance, will propel the market expansion over the forecast timeframe. For instance, in December 2020, Frontier Airlines unveiled the details of Recaro’s new seat design with 30% weight reduction over existing seats. The new seats will provide extra comfort and larger tray tables compared to earlier designs and will also fulfill other innovative fuel-savings initiatives from the U.S. Greenest Airline.

The fixed wing segment accounted for USD 9 billion in 2020 owing to growing aircraft production to meet on-order demand and to reduce production backlog. According to FAA, fixed wing aircraft from turbo prop and turbo jets are expected to rise in the U.S. from 9,369 and 11,484 from 2010 to 12,855 and 22,195 respectively by 2038. Airliners are upgrading their seat configurations and increasing seats to support demand & reduce congestion. Many aircraft manufacturers are also introducing wide-body aircraft; for instance, in October 2017, Airbus launched the A330-900 Neo wide body aircraft. The aircraft offers wider seats and exalts the overall cabin experience. The incorporation of innovative technology, such as high-quality upholstery, better retraction, thigh support, and flexible adjustment levels, is boosting the aircraft seat demand.

The military helicopters segment will witness around a 5% growth rate in rotary wing aircraft seating market by 2027 on account of the increasing demand for military helicopters to move troops and cargo. Advancements in seat technology with increased structural integrity are influencing the industry growth. For instance, Zvezda Research and Production Enterprise developed an innovative ejection seat system for attack helicopters, providing additional crew safety. As ejector seats are considered a new trend in helicopters, forces around the globe are considering the idea to provide additional crew safety during the period of mishaps, thus driving demand. 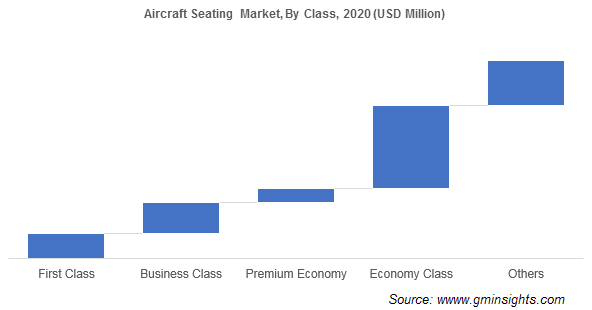 The economy class segment is poised to hold around 40% of market share by 2027 due to the rising domestic and international air travel. According to ICAO, scheduled passengers are predicted to grow to about 10 billion by 2040 from 4.5 billion in 2019. The aviation sector showcased a significant decline in international air passenger traffic in 2020 owing to restricted air travels as per the COVID-19 guidelines. Growing aircraft deliveries equipped with advanced seating arrangements providing optimized cabin space area and sufficient legroom will prominently spur the industry expansion over the forecast timeframe.

The first-class segment in the aircraft seating market will reach USD 2 billion by 2027. Shifting preference of airliner companies to provide enhanced passenger comfort and consistency in passenger experience will provide a positive outlook for the industry. The demand for first class seats is primarily manifested by the overall economic growth. Factors demonstrating the increased demand for first class seats include a recent surge of millionaires and billionaires across the globe. As first class tends to provide significant profit margins, airlines opt to incorporate seats with the latest technologies, such as reclining seats and private spaces with convertible beddings, to justify the cost of services offered for an elevated customer experience. 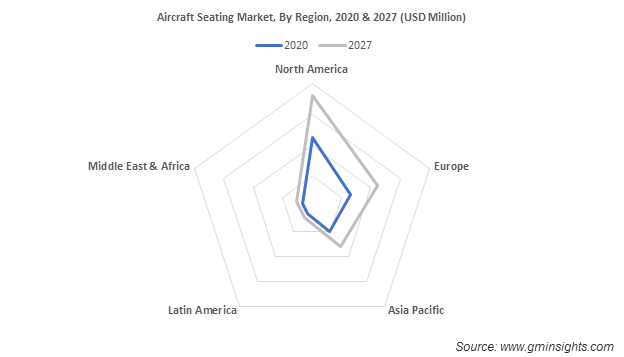 North America aircraft seating market captured over 40% of revenue share in 2020 led by the strong presence of manufacturers across the region. Aircraft manufacturers including Boeing, Bombardier, and others are focusing on their production rates, further escalating product adoption in the coming years. Increasing orders of new-generation aircraft equipped with modular seating configuration will foster the market revenue. Moreover, growing disposable incomes are providing significant opportunities for air travel, impacting the demand for new-generation commercial aircraft. rising orders and deliveries of aircraft to cater to the growing air traffic will positively influence the market progression.

The market is highly consolidated

The market is highly consolidated with major five players accounting for nearly more than half of the global industry. Many aircraft seating manufacturers are adopting various tactical initiatives, such as mergers, acquisitions, and production capacity expansion, to tap additional revenue share and increase their business output.

The market research report on aircraft seating includes in-depth coverage of the industry with estimates & forecast in terms of volume in Units and revenue in USD million from 2017 to 2027 for the following segments:

Aircraft seating industry size exceeded USD 10.26 billion in 2020 and will record a CAGR of 6.5% between 2021 and 2027.
Military helicopters will register growth at the rate of 5% from 2021 to 2027 due to the surging demand for the movement of cargo and troops.
Economy class will account for a share of 40% of the total aircraft seating industry revenue through 2027 owing to the growing domestic and international air travel.
North America accounted for more than 40% of aircraft seating market share in 2020 and will expand owing to the presence of major manufacturers in the region.
Customize this Report
Inquiry Before Buying