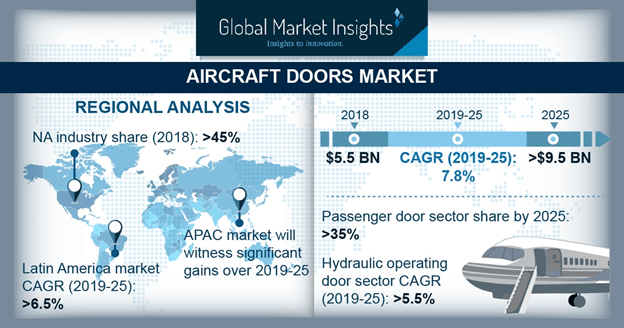 Increasing consumer spending in conjunction with shifting preference towards air travel will drive the aircraft door market size during the projected timeframe. Rising commercial aircraft production and deliveries to accommodate passengers will propel the product demand. According to International Air Transport Association (IATA), the air passenger traffic is bound to cross 7 billion by 2035 with a yearly growth of over 3.5%.

Business jets will witness significant growth with globalization and increasing trade activities. Rising adoption of private jets by organizations for business trips and conferences will drive the market. According to Russian United Business Aviation Association (RUBAA), in 2017, business jet traffic increased by around 2.5% as compared to 2016. Moreover, increasing refurbishment activities to enhance cabin interiors will propel product demand.

Passenger door will account for over 35% of the aircraft door market size by 2025 with its adoption for entrance and exit to the cabin area. Aviation industry participants are incorporating doors with retractable steps and folding handrails to increase cabin space and ease of operation. Manufacturers are focusing on implementing composite materials to enhance tensile strength and other physical properties. For instance, in April 2015, Premium AEROTEC installed carbon fibre composite material (CFRP) doors in A350-1000 to reduce production cost and overall weight.

Hydraulic operating door will witness over 5.5% CAGR by 2025 owing to its adoption for reducing efforts of cabin crew member. Airliners are implementing innovative technologies to ease door operation mechanism and ensure cabin safety. For instance, in March 2017, Latecoere launched passenger door with electric motor to lower the complications and operational errors. Further, it enables the cabin crew for safety slide preparation in emergency evacuation.

Manual operating door will witness significant growth in aircraft door marketplace over the forecast timeframe owing to its adoption for doors in small air carriers and emergency exits. Benefits such as low manufacturing cost as compared to hydraulic advocates its implementation over study timeframe. However, higher maintenance cost will limit its penetration in next six years.

In 2018, North America accounted for over 45% share owing to presence of multiple airplane manufacturers. Increasing military modernization programs for aircrafts including fighter jets will support product demand. For instance, in November 2018, FAA along with the U.S. army has initiated aviation modernization program for more efficient and safer jets. Further, technological progression in the conventional system with innovative aviation systems will enhance the aircraft door market size by 2024.

Asia Pacific will witness strong growth with rising passenger traffic. According to Association of Asia Pacific Airlines (AAPA) in 2018, the passenger traffic grew by around 8% and air cargo grew by over 4.5% as compared to 2017. Further, rising affordability and low flight fares will further boost the product penetration.

Aircraft door are allocated for access control and management of compartments in air carriers. The structures enable in entry and exit into cabin, loading and unloading of cargo and ground service. Government regulations such as Federal Aviation Administration (FAA) govern the designing and manufacturing of air carriers’ structure. For instance, FAA Title 49 provides requirement of air carriers to improve cabin safety.

The market size of aircraft door was valued at over USD 5.5 billion in 2018.
The industry share of aircraft door is estimated to exhibit around 7.5% CAGR from 2019 to 2025.
Landing gear doors will showcase a decent growth rate in the forthcoming years on account of its installation for efficient functioning of landing gears during ground maneuvering and flight operations.
Hydraulic operating door will witness over 5.5% CAGR till 2025 owing to its adoption for reducing efforts of cabin crew member.
North America dominates the market, accounting for over 45% revenue share in 2018 due to presence of multiple airplane manufacturers.
Global Market Insights, Inc., claims commercial aircraft held over 45% market share in 2018 impelled by rising air carrier fleets.