Air Defense System Market size was estimated to be over USD 25 billion in 2020 and is anticipated to grow at a CAGR of over 5% from 2021 to 2027 owing to a rapid uptick in military expenditure due to the growing geopolitical tension among countries. This upsurge in defense expenditure by governments across the globe to safeguard national interest is anticipated to drive the product demand over the forecast timeframe. 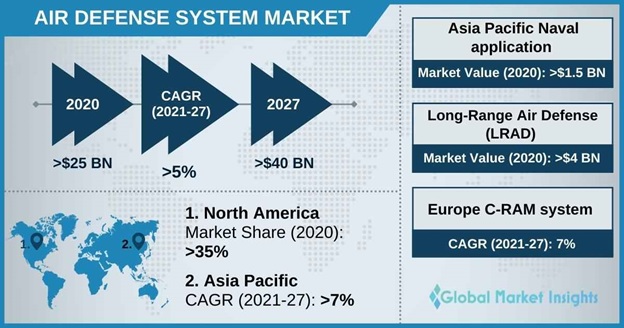 The air defense system is used by the military to spot and nullify enemy UAVs, aircraft, and missiles. The system provides protection against air-borne threats including UAVs, fighter jets, and ballistic missiles. The air defense system acts as an anti-weapon system and is used in numerous operations such as air space surveillance with the help of electro-optical sensors and defense radars.

The major players in the air defense system market are increasingly investing in R&D activities for providing technically advanced defense systems. For instance, in October 2021, Lockheed Martin made significant investments in the development and manufacturing of hypersonic systems to counter emerging threats from near-peer adversaries. The corporation is capitalizing on major digital factory capabilities to deliver hypersonic technology and new warfare capabilities.

The factors challenging the air defense system market growth is the limited client base and high involvement of multilateral organizations. For instance, the Missile Technology Control Regime (MTCR), which regulates the export of missile technology and is reinforced by the Hague Code of Conduct. This regulation significantly impacts the trade & commerce of ballistic missile systems, challenging the industry growth. 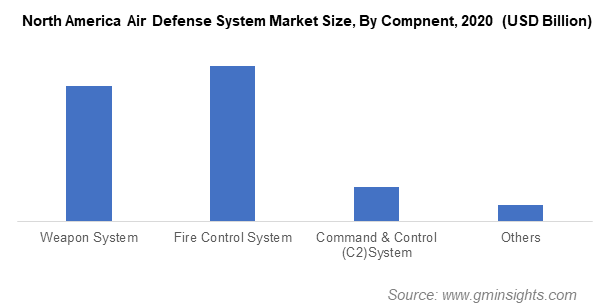 Based on component, the air defense system market is segmented into fire control system, weapon system, and command & control (C2) system. According to a market report, in North America, the fire control system held a market share of over 40% in 2020. The growing demand to precisely locate air-borne threats and technological advancements in hypersonic weapons & ballistic missiles will propel the segment growth.

Based on system, the air defense system market share is segmented into Counter Rocket Artillery Mortar (C-RAM) system, missile defense system, and anti-aircraft system. According to the market forecast, Europe C-RAM system is anticipated to register a CAGR of around 7% through 2027. Countries are emphasizing on developing indigenous C-RAM systems to safeguard their infrastructure from artillery attacks.

The Long-Range Air Defense (LRAD) accounted for over USD 4 billion in 2020. The rising procurement of ballistic missiles and fighter jets from countries including Russia, China, India, Japan, the UK, and South Korea will contribute to the industry statistics. Increasing industrial growth and rising geopolitical tension among China, India, and Pakistan are supporting the growth of LRAD systems. Long range radars simultaneously track multiple, wide-ranging air threats from Air Breathing Targets (ABT) to Theatre Ballistic Missiles (TBM).

Based on application, the land application is forecast to grow at a CAGR of over 5% through 2027 in Europe due to the need for enhancing ground defense systems against unauthorized access in territories. Several government bodies are strengthening their surface-to-air missile systems by signing a contract with other countries. For instance, in November 2021, Russia agreed to supply S-400 Triumf surface-to-air missile systems to India.

The Asia Pacific air defense system market is anticipated to register a CAGR of over 7% through 2027 owing to the increasing military expenditure. Air defense system are gaining traction in Asia Pacific countries including India, China, and Taiwan due to rising conflicts over international borders. For instance, in March 2021, China allocated over USD 208 billion in defense, owing to growing political & military tensions with the U.S and India. Such high defense expenditure to safeguard its national interest will propel the market growth in the region through 2027.

Market leaders are adopting collaboration and partnership strategies with other air defense system companies to develop advanced missile systems. For instance, in August 2021, SpaceX collaborated with L3Harris to develop hypersonic missile defense systems for the U.S. Department of Defense. SpaceX and L3Harris will develop four missile detection satellites for the first launch in 2022. L3 Harris has incorporated infrared sensors for use in its weather detection satellites in the new spacecraft, which will be part of the U.S. National Defense Space Architecture.

The air defense system market report includes in-depth coverage of the industry with estimates & forecast in terms of revenue in USD from 2021 to 2027 for the following segments: