Afterburner Market size exceeded USD 110.36 million in 2019 and is estimated to exhibit over 8% CAGR from 2020 to 2026. The increasing fighter aircraft backlog & production along with rising fleet of the old generation fighter aircraft in various countries across the globe is expected to drive the industry growth. 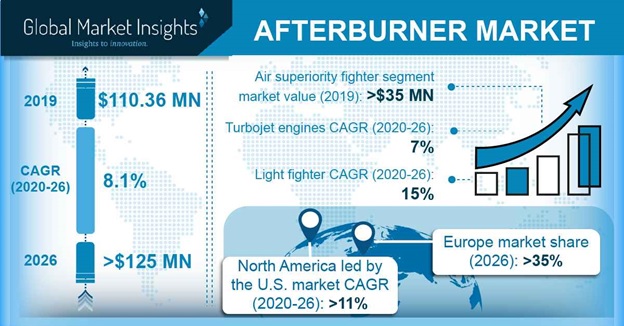 Numerous countries are focusing on manufacturing their own 5th or 6th generation fighter aircraft as importing would involve significant costs and leave the country to be dependent on the exporter country for software updates, maintenance, and spare parts. For instance, Germany and France are planning to launch a fighter jet by the end of 2025. Strong rivalry among market participants has impacted the price trend of the product. Industry participants are concentrating on value addition to the product such as lower fuel consumption, lower weight, lower size, and improved efficiency. 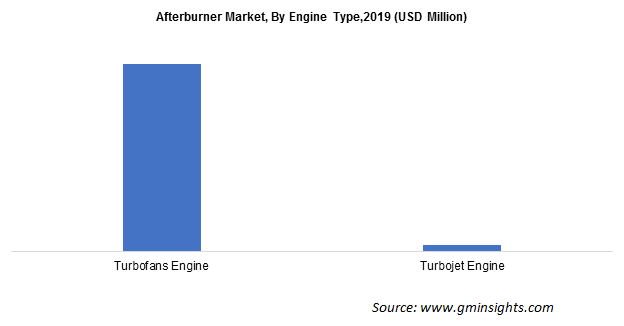 The turbofans engine type captured around 95% of the afterburner market share. The countries are strengthening military strength to ensure border safety. Switzerland is likely to buy up to 40 fighter aircraft and Finland is planning to buy new fighter aircraft as a replacement for its aging F-18 fleet. The ongoing covid-19 has substantially obstructed the fighter aircraft production in 2020, and with the enforced lockdown, the production and supply of parts have come to a halt, globally.

The aerospace and defense industry observed noteworthy growth in 2019; for instance, in 2019, Lockheed Martin Corporation produced nearly 134 F-35s fighter planes, with 47% increase from 2018 and nearly two times more production compared to 2016, which are likely to drive the turbofans engine and afterburner market. 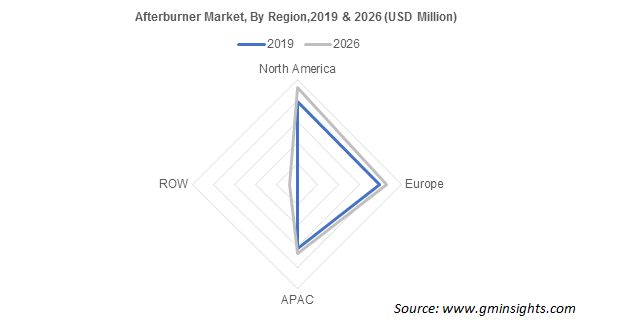 North America afterburner market led by the U.S. is projected to witness more than 11% CAGR through 2026. The U.S. alone produced above 160 fighter aircraft in 2019 and the U.S. held about one-third of the global fighter aircraft production. Furthermore, the U.S. has witnessed a significant number of orders of its new 5th generation fighter aircraft despite covid-19. In 2020, the Polish defense minister, Mariusz Blaszczak signed a contract with the U.S. government to buy 32 F-35 fighter aircraft, which is scheduled to be delivered by 2024.

The increasing cases of covid-19 has significantly impacted the fighter aircraft production and delay in the supply of engine components as U.S. aircraft manufacturers are heavily dependent on Mexico for fuel systems or sensor-related products, increasing backlog for manufacturers.

The afterburner industry to be highly consolidated

The afterburner market is highly consolidated with four key market participants holding majority share in the industry. These players are involved in partnerships with fighter aircraft manufacturers or with the regional government to gain a competitive advantage on rest of the manufacturers. For instance, in June 2019, Pratt & Whitney was awarded a USD 3.2 billion contract to provide 233 fighter aircraft engines with the afterburner for F-35 fighter jets to the U.S. and its allies.

With the increasing demand for 5th generation fighter aircraft, many manufacturers are collaborating with 5th generation aircraft manufacturers to provide their products in the future. For instance, MTU Aero Engines AG has been in contact with Germany and France to develop Next European Fighter Engine (NEFE) to replace multinational Eurofighter engine and Rafale.

The market report afterburner includes in-depth coverage of the industry with estimates & forecast in terms of volume in Units and revenue in USD million from 2016 to 2026 for the following segments:

The market for afterburner had reached USD 110.36 million in value during 2019 and will record about 8% CAGR up to 2026 by 2026 with the expanding backlog and production of fighter aircraft.
The share of air superiority fighters was valued at nearly USD 35 million in 2019 owing to increased afterburner demand from the growing deployment of fighter aircraft for aerial domination.
Aircraft with turbofans engine contributed about 95% of global afterburner industry share in 2019 as countries focus on reinforcing their military prowess and border safety.
North America afterburner market forecast is impacted by the high production of fighter aircraft in the U.S. and the regional industry will register over 11% CAGR through 2026.
Customize this Report
Inquiry Before Buying