Aerospace Landing Gear Market size exceeded USD 18.6 billion in 2019 and is estimated to exhibit 4.9% CAGR from 2020 to 2026. Positive trends from private ownership firms with favorable investments will further support the industry demand. Growth in commercial aircraft owing to increasing air passenger traffic is the key feature driving the market. 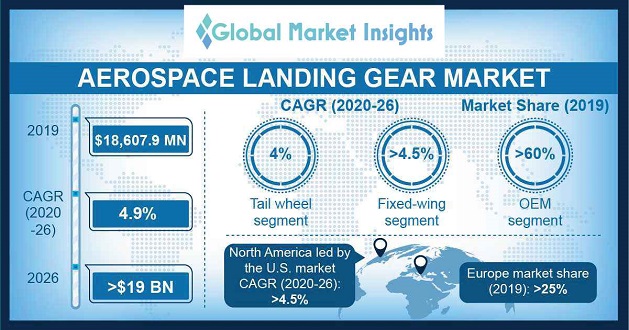 Increasing purchasing power of the consumer along with a preference for air travel due to superior safety will fuel the demand for new aircraft and aerospace landing gears. Aircraft manufacturers are continuously concentrating on reducing flight rates further attracting passengers who prefer air travel. Low commodity prices, stable GDP growth, and strong passenger demand are the key factors influencing product penetration. Rising affordability among the middle-income population for air travel with low airfares coupled with growth in the tourism sector will further support the industry expansion and strengthen demand for the market.

The commercial aviation segment in the aerospace landing gear market valued at USD 15 billion in 2019 propelled by the substantial production of these aircraft worldwide. The aerospace sector is witnessing increasing demand for aircraft including B737, A350XWB, B787, and A320. Rising disposable income is resulting in shifting preference for air travel. The growing air passenger traffic in developing countries will further contribute to revenue generation. Moreover, COVID-19 has significantly impacted air traffic growth in 2020. 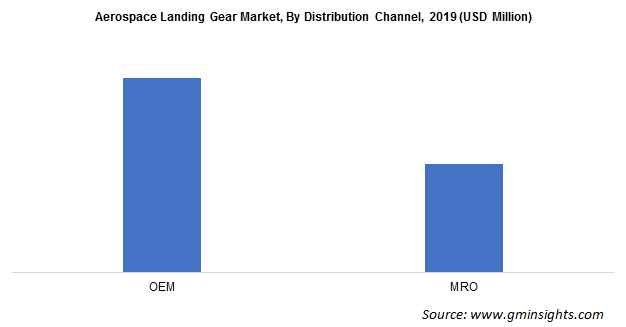 The OEM segment dominated around 60% of the aerospace landing gear market share in 2019. The rising aircraft production capacity of major manufacturers is sufficing the overall industry growth. Growing passenger fleet with affordability and development in lifestyle is inducing a positive impact on product growth. Tier 1 and Tier 2 aerospace industry players are improving the supply chain of major components and pursuing low-cost sourcing solutions. Industry participants are entering into long-term supply agreements with the aircraft manufacturers to reduce the overall airplane backlogs. There is an increasing demand for military aircraft by numerous countries to replace aging fighter aircraft.

According to the International Civil Aviation Organization (ICAO), with optimization of benefits and sustained growth, there is a requirement for modernized air transport facilities along with infrastructure. These needs result in increasing investments in new airport construction, which are expected to create significant opportunities for MROs service providers. In 2019, there were nearly 423 new airports under construction or planned, out of which around 220 projects are in Asia Pacific and 58 are in Europe. Additionally, China alone plans to construct around 200 airports by the end of 2035. Growing number of airports will require adequate facilities to repair and maintain aircraft landing gears. 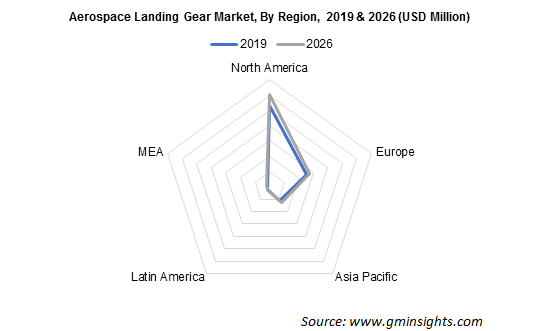 North America aerospace landing gear market led by the U.S. is poised to observe over 4.5% growth rate till 2026. In 2019, the U.S. alone produced more than 160 fighter aircraft and alone held over 40% of the global fighter aircraft production. Furthermore, prominent U.S. aircraft manufacturers, Boeing and Lockheed Martin witnessed a significant number of orders despite the COVID-19 pandemic. For example, in 2020, Boeing signed a contract with the U.S. Navy to provide three MQ-25 unmanned aerial refueling aircraft. The requirement to maintain global military supremacy and avoid security threats from other nations will enhance the aircraft demand.

The industry to showcase collaboration with aircraft manufacturers

This market research report on aerospace landing gear includes in-depth coverage of the industry with estimates & forecast in terms of volume in Units and revenue in USD million from 2016 to 2026 for the following segments:

The market for aerospace landing gears was pegged at USD 18.6 billion in 2019 and is estimated to witness over 4.9% CAGR up to 2026.
The industry share from the commercial segment had reached USD 15 billion in 2019 with the gradual expansion in aircraft production to cater to the rising air travel worldwide.
The OEM distribution channel held close to 60% of the aerospace landing gear market share in 2019 and will gain traction with increase in the demand for military aircraft across the globe.
North America aerospace landing gear industry size will record more than 4.5% CAGR over 2020-2026 owing to an increase in aircraft orders for manufacturers like Lockheed Martin and Boeing.
Customize this Report
Inquiry Before Buying