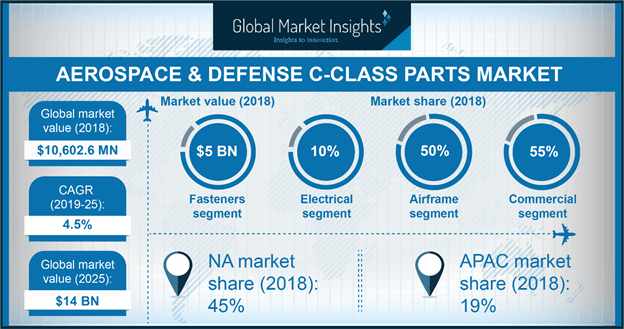 Increasing demand for commercial aircrafts in the developing regions will primarily drive aerospace & defense C-class parts market over the forecast timeframe. C-class parts are used in a variety of applications such as commercial & defense aircrafts, aircrafts engine assemblies, helicopters, missiles & defense systems, spacecrafts etc. These are small and consumables parts which have significant importance in the assembly stage of an aircraft. According to Boeing estimates, the Boeing 747 employs over six million parts, out of which half of them are fasteners. Growing applicability of the product as a result of rising airline passengers’ traffic is subsequently, driving demand for the market.

Introduction of private space research and exploration companies such as SpaceX, Blue Origin, Virgin Galactic has created lucrative opportunities in the space search & exploration sector. This has increased consumption of fasteners in the region. Recently, between 2018 and 2019 Indian space research organization, ISRO, launched 11 mission including one lunar exploration mission. Most of these organizations are government owned and government are increasing their spending on space missions such as launch of satellite, manned space missions, etc. As per the date global spending on space missions progressed by 6% in 2017, as compared to the 2016 reaching total of USD 14.6 billion. The growing possible industry of space research coupled with new space race by private companies will drive demands for aerospace & defense C-class parts market in space research & exploration sector.

The aerospace & defense C-class parts market is segmented on the basis of component into fasteners, bearings, electrical and machined. In 2018, fasteners segment represented the largest revenue share for around 50% in the overall market. It primarily includes screws, bolts, pins, rivets, nuts, rings, studs, washers, inserts and other small mechanical component that used for affixing and joining two or more parts. This large market share can be attributed to huge scope and high consumption in aerospace & defence applications. Fasteners component will foresee accelerating growth due to rise in demand of low-cost carriers across the world.

Aerospace & defense C-class parts market is divided on the basis of applications into airframe, system, engines and interiors. Airframe segment held a largest market share of over 50% of market revenue in 2018. It includes the fuselage, undercarriage, empennage, wings etc. Large demand share for airframe applications is mainly due to indispensable usage of fasteners in large quantity. These fastening products are used to transfer the load from one part to another. Fasteners are widely used in airframe application, growing demand for innovative airframe structures will propel the market demand during forecast timespan.

Apart from engine, the other application areas that seeks maximum market share of aerospace & defense C-class parts are systems. Systems includes flight control, landing gear, cooling and heating, avionics, etc. These sub-systems play crucial role in the functioning of an aircraft and C-class parts has huge applicability in such systems. In 2018, system segment generated more than USD 1.5 billion. Engine is another segment that will witness substantial growth during forecast period due to replacement of old aircrafts and development of new fuel-efficient engines. Application of C-class parts in engine is deemed very crucial due to unique requirement of properties for such extreme application.

Global aerospace & defense C-class parts market is categorized on the basis of distribution channel OEM and aftermarkets. Original equipment manufacturer held a share of around 30% in the overall market. This is due to extensiveness of mergers and acquisition prevailing among aircraft manufacturers and component manufacturers. This allow companies to expand its product portfolio and increase their market share.

Aftermarket is the market for spare parts, accessories, and components all together. This segment held around 70% market share in 2018. This is primarily due to MROs are much more flexible and they can expand &diversify their product portfolio according to airlines wants & needs. They can provide more extensive support to customers such as line planning, fleet management and adapting to new aircraft types.

The end-user segment consists of commercial, military & defense, spacecrafts and others. In 2018, commercial segment accounted for more than 55% of total revenue. This is mainly attributed to rise in air passenger traffic couple with lower air fares. Additionally, rapidly growing tourism industry and increasing number of intercontinental flights shall positively drive the growth of commercial segment in coming years. Increasing demand of single aisle jets all over the world will augment the aerospace & defense C-class parts market demand. 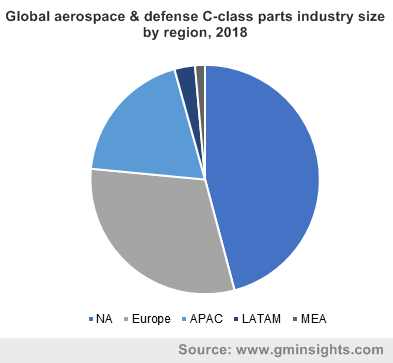 European aerospace market remains strong, although several companies have faced operational setbacks. However, increased defense spending by a number of European governments and the European Defense fund to support revenue growth will propel demand. Asia Pacific aerospace & defense C-class parts market held a significant share of 19% in 2018 and it will have strong growth in coming years. This region is home for majority of world population and also their improving real income boosted air traffic. Rising investments in infrastructure development in the fast-developing economies of China, India, Japan, Australia, and South Korea will have a significant influence on the regional market growth during forecast period.

Aerospace industry is one of the most powerful industries in the world and it had substantial impact on the growth of society at large. It encloses worldwide network of manufacturers who produces airplanes, helicopters, commercial & military aircraft, missiles, rockets, satellites and spacecrafts. These manufacturers depend on vast number of supplier firms that produces variety of products such as avionic, sub-systems, C-class parts, etc. to produce final product. Aerospace industry has grown dramatically in past 20 years with passenger number rising from 1.4 billion in 1998 to 4.1 billion in 2018. Rise in number of passengers coupled with increased level of income will further boost aerospace & defense C-class parts market revenue by 2025.