With successful vaccination drives slowly making the dreaded COVID-19 a thing of the past, nations worldwide have started putting more efforts towards recovering from the economic slump it created. In addition to the devastating toll, it took on global health, the pandemic also severely razed several of the world’s industries. However, it proved particularly destructive for markets such as F&B, automotive, electronics, and aviation, among others.

Indeed, the automobile industry, which was, at the time, facing numerous disruptions such as the rise of ridesharing, electric mobility, and the like, grinded to a halt. Several experts have since estimated that the sector would face great difficulty to regain its pre-pandemic momentum.

At the peak of the pandemic in 2020, the global auto sector was going through one of its worst phases yet, facing a host of challenges ranging from tightening vehicle emissions standards to changing customer requirements. The lockdowns further brought slumping car sales to the fold. Later, 2021 introduced its own set of challenges, with supply chain issues and semiconductor shortages outlining the industry scenario just as economies had started to take their first cautious steps towards resuming normal life.

In fact, as per the European Automobile Manufacturers Association (ACEA), global vehicle production dropped by more than 16.9% in 2020 with lower-than-expected recovery in 2021. The industry currently faces a fundamentally changed landscape where established giants are adopting previously unheard-of order-based model to sell cars while dealing with inventory shortages.

Several automakers, including Ford, General Motors, and Hyundai had predicted the near two-year chip constraint to ease by the end of 2022. However, automotive chipmakers, on the other hand, anticipate the industry to take longer to recover. Meanwhile, the precarious global economy is threatening to further shrink the revenue pool for the market.

Below is a brief overview of many critical challenges faced by the global automotive industry that’ll help in understanding the present scenario in the vehicle manufacturing space. 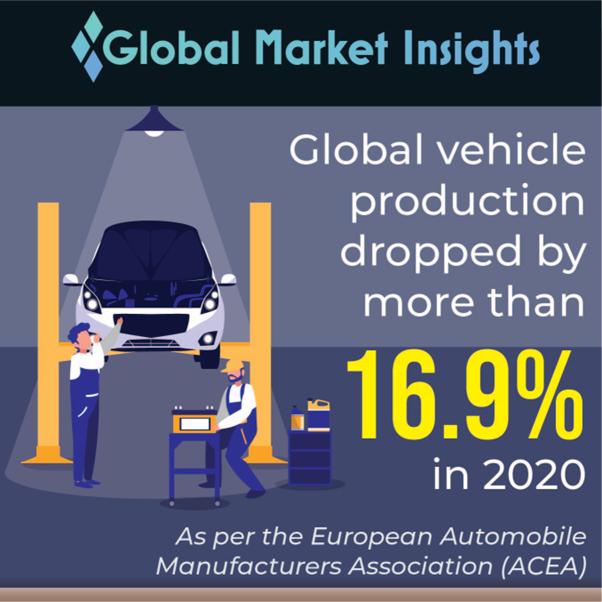 While the pandemic led to massive production halts in 2020 due to intense social distancing norms and nationwide lockdowns, 2021 saw some activity from industry players trying to kickstart a recovery. However, their efforts were seriously constrained from the ongoing supply chain issues, semiconductor shortages, and different degrees of lockdowns countries imposed to deal with the numerous waves and variants of the virus.

2022 brought a ray of hope as the vaccination drives started to take effect, allowing nations to reopen industries unanxiously. As per the latest ACEA numbers, nearly 8 million vehicles were manufactured in the EU in the first three quarters of 2022, representing a 5.8% rise from the 2021 numbers for the same period. Other major markets, including North America and China reported 11.8% and over 15.1% increase in their outputs respectively. Many auto companies also altered their car-making approach – embracing the industry 4.0 for efficiency and better manufacturing resilience.

However, experts opine that parts shortages, which have been further worsened by the Russia-Ukraine conflict, may still hold the industry back, having a more pronounced impact on the EV sector. The war has also caused major governments, such as the UK, to ease their climate commitments by approving new fossil fuel exploration projects and discontinuing battery electric vehicle incentives to avert a looming energy crisis.

With the end of supply shortages still not visible on the horizon, automakers are stuck in a limbo and are moving away from conventional manufacturing processes and standards to keep afloat in a volatile landscape.

Drastically reduced vehicle sales emerged as a critical challenge for the automotive industry during peak COVID-19 period. Now, two years past that time, the issue of poor sales continues to still plague the industry, with a domino effect of different factors taking turns to keep the numbers low. During the pandemic, it was the global lockdowns that impacted sales as stay-at-home mandates and remote working took away the need to travel. This of course did not come as a surprise; a new vehicle purchase would be the least of priorities for consumers during a global pandemic.

In 2021, the numbers recovered marginally, but remained low due to low inventories. Many willing customers had to deal with inexplicably long wait times, with popular models coming with a wait queue that was 12 months or longer. The long delivery times hinted towards a reinvigorated demand at a time when the supply was lacking. In fact, when this demand was rising, auto giants such as Toyota were scaling back production due to parts shortages. In February 2021, Toyota announced that it was again lowering its vehicle production by over 150,000 units.

According to Germany’s Center for Automotive Research (CAR), global vehicle sales for 2021 stood at over 71.3 million, having gone up from over 68.6 million in 2020. While sales were expected to rally in 2022, the conditions created by the combination of Russia-Ukraine conflict, and China’s strict zero COVID policy-fueled lockdowns are likely to lead to a contraction of 5%, with numbers falling to approximately 67.6 million.

The auto sector has been dealing with the pressing issue of job losses since before the first lockdowns took effect in 2020. The livelihoods of auto industry workers are being challenged by a spate of different factors over the past few years, with manufacturing shutdowns and outdated skills being the most prominent of them all.

In 2020, with the coronavirus spreading unchecked, many firms had to shut factories and conduct massive layoffs in response to the global lockdowns. Nissan for instance, closed its Barcelona unit in Spain, after reporting massive losses. Meanwhile, Swedish car maker, AB Volvo, also announced plans to lay off over 4,100 white-collar workers in H2 2020. Many other manufacturers in Europe were also forced to put their employees on short-term work during the pandemic.

In 2021, while lockdown led layoffs took a backseat, the underlying issue of skill transitioning again became a major cause behind job losses for auto sector workers. The transition to industry 4.0 and electrification has broken away from the labour-intensive traditional model. Experts estimate that the impacts of the transition are likely to play out over the long term. As per estimates by the German Association of the Automotive Industry (VDA) over 215,000 jobs are likely to be lost by 2030 in Europe, while US-based Economic Policy Institute estimating that over 75,000 jobs would become redundant by 2030 in the country.

Moving on to 2022, which brought its own set of challenges in the form of the Russia – Ukraine conflict. The war elicited a massive protest across the world, with many governments and global enterprises severing business ties with Russia at their own expense. According to the New York Times, more than 1000 enterprises have publicly cut ties with Russia and curtailed operations in the country since the start of the war.

Japanese car giant, Nissan clocked in a loss of more than $687 million after selling its assets in Russia for just $1. Many other carmakers, including Ford, Toyota, Mercedes-Benz, Renault have also made their exit, resulting in massive job losses, and further destabilization of the global market.

All in all, dealing with workforce redundancy is likely to remain among one of the consistent challenges faced by the automotive sector. Economists expect the market to take a long time to find stability in this regard.

The COVID-19 pandemic triggered a chain of events that have since continued to contribute towards supply chain disruptions for the industry. China, which ranks among the top automobile markets in the world, had over two-thirds of its automobile manufacturing capacity affected due to the lockdowns. This also severely impacted the supply chain as the country is one of the leading exporters of raw materials and components for the sector.

Amid all the disorganization and disruption, many industry players also announced their shift towards electrification in 2020-21. For instance, in January 2021, American heavyweight General Motors, announced its intentions to build and sell a complete portfolio of zero-emission vehicles by 2035. This created additional pressure on the sector and further exasperated the bottleneck in semiconductor production.

As per Yale University’s Environment 360 magazine, the EU heavily relies on Russia for the supply of nickel and other metals for EV batteries and other green technologies. Meanwhile, preliminary estimates from the Kleinman Center for Energy Policy suggest that Ukraine sits on a treasure trove of lithium deposits, holding approximately 500,000 tons of the non-renewable element that makes clean energy possible.

The cluster of events impacting the supply chain have shown no signs of settling as material requirements keep on rising. According to the White House, the demand for minerals such as graphite and lithium, which are used in EV batteries, is likely to increase even more—by as much as 4,000% in coming years, further pushing the supply chain askew.

Liquidity is among the biggest challenges the automobile industry has faced after the destabilization brought forth by the pandemic. Factory shutdowns and crashing sales gradually caused heavy financial losses, and the parts as well as semiconductor shortages kept the recovery down, with OEMs forced to operate on minimal liquidity.

Market conditions have further worsened due to the Ukraine war and are likely to push many small auto firms out of business. Cash reserves had already hit their all-time low during COVID-19; the situation is expected to take time to recover.

As the industry’s financial challenges continue to reign, automakers are likely to turn to the governments for supportive measures to obtain liquidity assistance. Leveraging AI in automotive market to forecast cash influx in real-time and establishing a liaison with global financial institutions to drive investments towards automation, upskilling, and connected technologies are also some options carmakers can tap into while dealing with the said liquidity challenges. 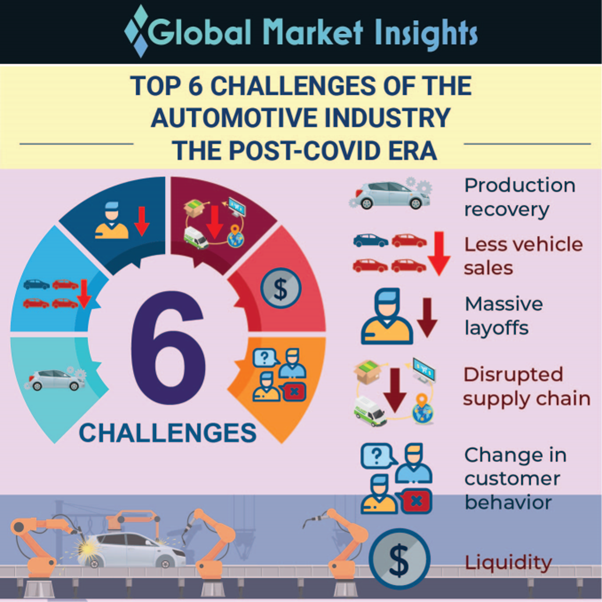 The unstable, recession-heavy blend of the global economy, price inflations, and the all-around dire state of financials and public health have hammered a considerable behavioural change in consumer buying patterns.

During 2020, a critical time period where the pandemic was spreading unchecked, making large purchases such became the least of everyone’s worries. Many consumers backed out of their ongoing vehicle purchase commitments to rethink finances and prepare for the worst-case-scenario, a key challenge the automotive industry had immense difficulty in addressing.

In 2021, for those that could afford, buying a car from dealerships or offline showrooms became next to impossible, given the year-long wait periods. To combat the same, many automakers have attempted to transition their inventories to an order-based model. This helped them redirect their resources towards the vehicles that were seeing demand, pausing, or freezing the assembly lines of poorly selling models. Many also made the car purchase experience digital and implemented numerous other steps to build up the dwindling consumer confidence.

However, the uncertainties birthed by growing geopolitical tensions and the infamous crypto crash of 2022 reversed all progress automakers had made in this regard. Several industry players have cautioned that sales may likely fall below the 2020 numbers due to the deflating economy and the increasing tight-fisted spending approach of consumers.

Experts anticipate the automobile sector to be brimming with challenges and risks for a while; possibly taking more years than expected to again see the pre-pandemic success levels. Through the coming years, car firms need to work on solving the tangle of existing challenges through effective strategic measures. To start with, securing reliable raw materials, parts, and components, establishing more centralized production models, and collaborating with governments as well as financial institutions to introduce new incentives may work.

Get a 7 day access to our GMIPulse report database.

Explore all its features completely free of cost

Get a 7-day free access to our GMIPulse report store.