Animal Model Market size is set to exceed USD 24 billion by 2025; according to a new research report by Global Market Insights, Inc.

Increase in usage of animals in pathological, biological and research studies will enhance the animal model market growth over the forthcoming years. The rapid growth is owing to the physiological and functional resemblances of the animals to the human body. However, there are several guidelines and regulations that are needed to be followed while doing animal testing.

Growing number of animal testing procedures across the globe for various scientific research purposes will result in augmenting the market demand in the near future. The major advantage of animal testing is that it assists the researchers in scientific and medical research in order to enhance and improve the end product quality. Many medical and healthcare developments such as vaccines, HIV drugs, antibiotics, etc. have been possible owing to animal testing procedure. The aforementioned factors will play significant role in enhancing the market size in the near future. 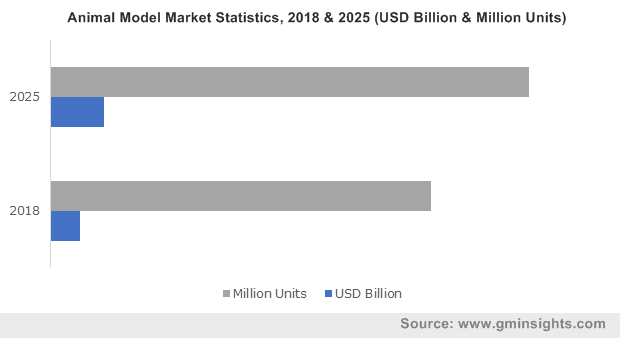 Based on the type of animal, the market is segmented into mice, rats, fish, birds, cattle, pigs, amphibians, guinea pigs, dogs, cats, rabbits, monkeys, sheep, hamsters and others. Rat model market was valued at around USD 1 billion in the year 2018 and is estimated to show similar growth trend over the forecast period. Rat model has several advantages over other animal models. The genetic make-up or structure of the rat is similar to humans (around 99%) and that facilitates large scale research and development studies. Advantages offered by the rat model such as potential use in drug development and medical research will result in more efficient and increase in use of rat in research activities, augmenting the market demand in the future.

Based on technology, the market is bifurcated as CRISPR, microinjection, embryonic stem cell injection, nuclear transfer and others. Embryonic stem cell injection in animal testing is estimated to witness around 8.5% growth over the analysis timeframe. The high growth rate is owing to the genetic modification in animals used for biomedical research. These genetically modified animals are developed as a potential source of tissues and organs for xenotransplantation in humans. Furthermore, Various attempts have been made to create embryonic stem cell from cattle, sheep and other animals for conducting similar studies with the goal of improving animal health and productivity. Hence, aforementioned factors are expected to propel the market outlook in the upcoming years.

On the basis of application of animal models, the market is segmented into research and development, production and quality control, academics and others. The research and development segment is further sub segmented as infectious disease, immunological diseases, cancer, cardiovascular diseases, diabetes, genetic diseases, neurological diseases and others. Application of animal model in academic studies was valued at around USD 200 million in the year 2018. Growing usage of animals for academic studies will propel the animal model market statistics. Physiological and anatomical similarities between the animals and humans has resulted in prompting the researchers to explore several basic and fundamental biological research studies in animal models before applying them on humans. Hence, increase in number of animals used for basic research purpose will augment the segmental growth.

The use segment is segregated as human and veterinary. The use of animal models in veterinary research is projected to grow at around 8% CAGR over the analysis time frame. All biomedical research with lab animals advances veterinary medicine and helps pets live longer, healthier and happier lives. Some of the ongoing treatments that range from improving current vaccines for dogs to develop effective cancer drugs for cats are a few factors that are expected to impel the segmental growth.

UK dominated the Europe animal model market with a total revenue of USD 475.6 million in the year 2018. According to recent statistics, around 4 million animals were used for animal testing in the country. Presence of established pharmaceutical companies and growing research and development activities will augment the market demand and adoption rate of animal testing, fueling the business growth in the near future.

Increase in strategic initiatives such as mergers, acquisitions and collaborations by major industry players will enhance the animal model market demand in future

Prominent market players in the animal model industry include Charles River, Envigo, genOway, Harbour BioMed, Horizon Discovery Group plc, Janvier Labs. The key industry players focus on several major strategies such as merger, acquisition, new product development and launch in order to enhance their product portfolio and increase geographical expansion presence across the world. For instance, In April 2019, Charles River Laboratories completed the acquisition of Citoxlab. It leads to expansion of the treatment option and further strengthen the company’s global position in the market by expanding its scientific product portfolio.

Animal Model Market
Contact Us  Request Free Sample
Top
We use cookies to enhance your experience. By continuing to visit this site you agree to our use of cookies. More info X