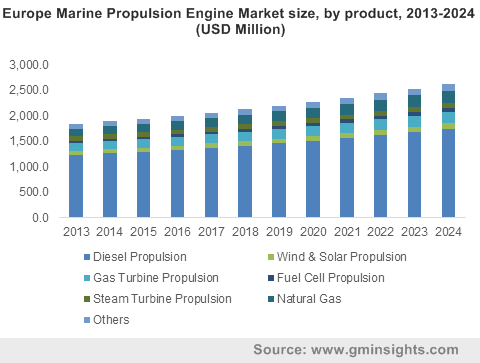 Depletion of conventional and shale gas reserves will increase LNG demand, especially as a marine fuel. LNG adoption requires availability of specialized insulated tanks and a safe area which drives demand for larger storage space. However, several alternative tank arrangements are adopted along with numerous system alternatives through which LNG can be utilized.

Advent of nuclear propulsion systems act as a key interest for vessel designers as a small percentage of nuclear fuel is engaged in providing energy which is equivalent to a relatively high weight in coal or oil. It also proves to be beneficial for icebreakers while exploring frozen waterways in the Arctic. Increasing CO2, NOX, SOX, volatile organic compounds and particulate matter emissions could focus on non-conventional energy sources such as wind and solar energy.

Wind & solar accounted for over 3.5% of the marine propulsion engines market share in 2015 and is estimated to grow at 5.9% CAGR from 2016 to 2024. Rising prominence of these systems as auxiliary power source owing to its environment friendly nature will drive the marine propulsion engine market demand over the forecast timeline. Gas turbines were valued at over USD 900 million in 2015, growth in the sector can be credited to high speed sprint operation mode offered by these turbines. Navy and military sector also offer massive growth prospects over the forecast timeframe.