Hearing Aids Market size is set to surpass USD 14 billion by 2027, according to a new research report by Global Market Insights Inc.

Rapidly aging population is expected to boost the adoption of hearing care devices as the aging population is at higher risk of acquiring hearing disabilities as compared to the younger population. The incidence of age-associated hearing loss, also called Presbycusis increases gradually with age and majorly occurs with changes in auditory nerve as well as inner ear. Age-related hearing loss affects more than billion people across the globe and is one of the leading factors increasing the number of disability years in developed countries.

Hearing loss in aging population also has significant economic implications and results in high healthcare expenditure for efficient management of hearing disabilities that is poised to prove beneficial for the hearing aids market. As per the Audiology and Neurotology article, high prevalence of chronic health conditions such as cognitive disabilities, diabetes mellitus, high cholesterol level, obesity and other factors commonly reported in the aging population are responsible for augmenting the risk of age-related hearing loss in the elderly population. The growing elderly population along with rise in number of people affected with age-related hearing loss will increase the use of hearing aids and further promote the market growth in the coming years.

Growing prevalence of hearing impairment is projected to fuel the industry growth during the forecast timeframe. According to the World Health Organization (WHO), the number of people affected with hearing impairment was estimated to be 360 million in 2011 and gradually rose to 466 million in 2018. The estimates suggest that the number is further anticipated to surge and reach 630 million by 2030 & more than 900 million by the end of 2050. As per the Global Burden of Disease estimates, people suffering from mild and unilateral hearing loss were 1.2 billion population in 2008 and soared to 1.57 billion in 2019. Recent data from the WHO predicts the number to go higher and reach around 2.5 billion representing the population associated with some degree of hearing impairment and at least 700 million are predicted to require assistance from hearing rehabilitation and hearing aids. The high proportion of population currently affected with hearing impairment and increasing prevalence of this condition will foster the demand for hearing aids exponentially, further offering the industry expansion opportunities in the coming years. 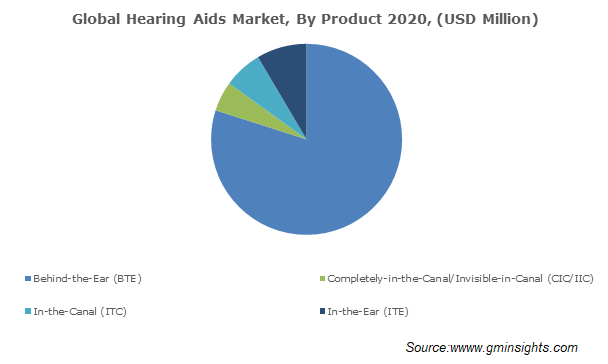 The hearing aids market for in-the-ear (ITE) segment was valued at USD 690 million in 2020. The in-the-ear hearing aids are personalized and fit inside the outer ear providing easy camouflage and better aesthetics. These hearing aids are recommended for people affected with moderate hearing loss, limited dexterity and reduced vision. In-the-ear hearing aids possess several auditory advantages such as better amplification and sound quality. Additionally, ITE hearing devices offer easy use of other devices such as headsets and telephones. ITE aids also feature a telecoil and a twin microphone system that assists in delivering better sound clarity to the user.

The pediatric segment in the hearing aids market will witness 8.4% growth rate through 2027 led by the rise in hearing impairment concerns among pediatrics. According to the National Institute on Deafness and Other Communication Disorders, around 3 out of 1,000 children in the U.S. are born with detectable hearing loss in at least one ear and nearly 15% of school-age children suffer from some form of hearing loss. In addition, growing number of infants born with permanent congenital hearing loss and sensorineural hearing impairment is further predicted to influence the demand for hearing aids, thereby promoting the market progression.

China hearing aids market accounted for over 25% of revenue share in 2020 and is estimated to attain a CAGR of 10.7% by 2027 owing to the rise in prevalence of hearing loss and aging population. The WHO survey revealed that the standardized incidence rates of hearing disorders in China were 15.84%, with 55.31% of the affected people aged above 60 years. The increasing prevalence of lifestyle disorders and other conditions such as diabetes, hypertension and noise exposure are associated with increased risk of hearing impairment and will impel the demand for hearing aids in the country, further propelling the market value.