Cloud Gaming Market size is set to reach USD 8 billion by 2025; according to a new research report by Global Market Insights Inc.

The price of games has increased dramatically over the last five years. The base price of popular games such as Super Mario and Call of Duty starts from over USD 60. The special and limited editions of these high-end games cost even higher. The steep price of various popular high definition games is hindering their adoption among various price-sensitive gamers. The cloud gaming platforms provide gaming enthusiasts with unparalleled access to over hundreds of games at cost-effective prices. The cloud gaming platforms also offer flexible payment options to their users in the form subscription plans on a monthly or annual basis. This provides an inexpensive alternative for gamers to explore numerous games simultaneously, driving the cloud gaming market growth. 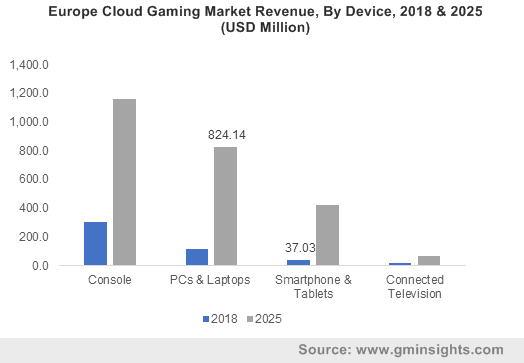 The video streaming cloud gaming market is anticipated to attain a growth rate of over 25% from 2019 to 2025. The mechanism bypasses the requirement of purchasing any additional gaming hardware devices and allows users to play various resource-intensive games irrespective of the specifications of their tech devices. The streaming mechanism consumes large amounts of bandwidth and demands stable internet connectivity over the entire duration of the gameplay. This has been the primary factor limiting its usage in certain developing countries. The ability of the file streaming approach to offer uninterrupted and high-quality gaming experience is driving its adoption among major cloud gaming platforms such as Sony and Microsoft.

The connected television cloud gaming market is expected to witness a CAGR of over 15% during the projected time duration. The television manufacturers are constantly working on various new strategies to augment the features of their offerings to differentiate their products from their competitive counterparts. The advent of cloud gaming has provided television manufacturers with lucrative opportunities to further enhance their product capabilities and generate new revenue streams through subscription fees. This is encouraging television providers to form tie-ups with platform providers to integrate the cloud gaming functionality in the offerings. For instance, in May 2018, Amazon formed a tie-up with Blacknut to jointly launch the Blacknut’s cloud gaming on its Amazon Fire TV.

The Business-to-Business (B2B) cloud gaming market is anticipated to register a CAGR of over 40% during the forecast timespan. This is attributed to the technological advances in the connectivity landscape. The telecom providers are focusing on generating additional revenue through their existing fiber investments by collaborating with cloud gaming platform companies. For instance, in March 2019, Ooredoo, a Qatar-based telecom operator formed a partnership with PlayGiga to deliver high-definition game streaming services to masses without the need for any gaming equipment. The Business-to-Consumer (B2C) is not adopted by the start-ups and the smaller players as the distribution model incurs high marketing overheads and capital expenditure.

The North America cloud gaming market held over 45% industry share due to presence of large players such as Microsoft, Electronic Arts, and Google. These prominent players are conducting various strategic R&D initiatives to enhance the product capabilities. For instance, in October 2018, Google initiated “Project Stream” to test game streaming services over the internet through the chrome browser. The presence of advanced communication infrastructure in the region is also encouraging companies to launch their products in the region. The average internet speed in the U.S. was over 18.7 Mbps in 2018, which is a 22% increase from its previous year.

The players in the cloud gaming market are forming alliances with other companies operating in the market to attain an edge over the mainstream counterparts. The platform providers are forming tie-ups with game developers and publishers to enhance their existing product capabilities. The publishers are also signing agreements with cloud gaming platform providers to stabilize their revenue streams in the volatile gaming landscape. The larger players are acquiring smaller platforms to gain access to their technological expertise. For instance, in May 2018, Electronic Arts acquired cloud gaming technology assets of GameFly. This acquisition was aimed at acquiring advanced technical expertise to explore new ways that can allow users with seamless access to games across multiple devices.

The global cloud gaming market research report includes in-depth coverage of the industry with estimates & forecast in terms of revenue from 2015 to 2025, for the following segments: