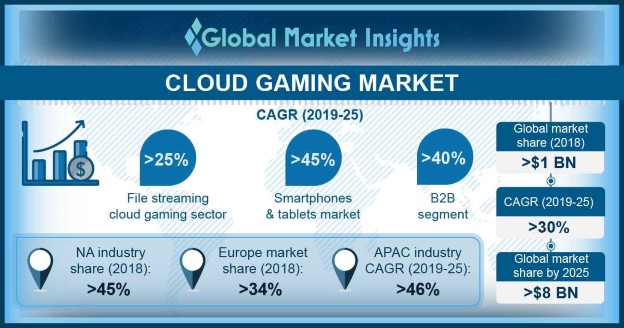 The advent of 5G technology has marked a new beginning in the connectivity landscape and brought about a fundamental shift in the gaming industry. Countries around the world are investing in 5G technology to gain broader microeconomic benefits. Countries such as China, U.S., South Korea, and Japan have made significant strides toward bolstering the 5G infrastructure in the country. 5G technology is a next-generation wireless technology that can enable faster data transmission speeds. As the cloud gaming technology requires high transmission speeds of over 10 Mbps, the deployment of the 5G infrastructure serves as a key enabling factor, allowing companies to launch their platforms in the region. The 5G technology also effectively deals with various latency issues, providing users with a seamless gaming experience, promoting the usage of cloud gaming platforms.

In the current scenario, purchasing a high-end gaming system requires substantial investments. The assembly of a typical low-end gaming system along with the right consoles will cost over USD 300 to 400. The top-end gaming machines range from USD 4,000 to 5,000. The average gamer usually invests USD 800 to 1,000 in purchasing or assembling a gaming system. The prices of the gaming components fluctuate from year-to-year and generation-to-generation. The price surge associated with gaming systems is preventing its adoption in over 70% of its potential customers. Over 60% of the users across the globe do not have access to computer systems that can handle demanding requirements of the AAA level games at acceptable quality. The cloud gaming model can allow companies to increase their profitability, gaining access to various new potential customers. 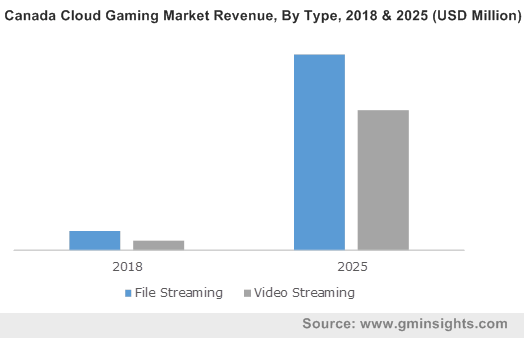 The file streaming cloud gaming market will grow at a CAGR of over 25% during the projected timeline. The file streaming approach is being typically applied by large players in their product offerings, such as PlayStation Now and Xbox Game Pass, due to the presence of their compatible gaming consoles. The use of file streaming allows companies to provide a seamless gaming experience to their users despite lower internet speeds. It further allows users to customize their gaming library and save their progress and gain instantaneous access to their profiles. The mandatory need for specialized gaming consoles is restricting its adoption among cloud gaming providers, offering their services through smartphones, PCs, and laptops.

The video streaming market has dominated the cloud gaming landscape with over 55% market share in 2018. The video streaming mechanisms are widely implemented by the start-ups operating in the market as they virtually eliminate the need for any expensive external gaming consoles or any computer-based tech devices to stream the gaming content. The lack of adequate telecommunication infrastructure in emerging countries such as India, Brazil, and Indonesia is limiting its usage among large players.

The console segment held over 60% share in the cloud gaming market due to the extensive and robust distribution network of major players such as Sony and Microsoft. These large players are primarily using their cloud gaming platforms to generate recurring revenue streams through their existing gaming customer base. The high price associated with the purchase of every new game inherently limits its usage among cost-sensitive buyers. The introduction of cloud gaming platforms has provided console manufacturers with a lucrative opportunity to monetize on their already existing large library of gaming content and augment their product capabilities.

The smartphones and tablets segment is expected to grow at a CAGR of over 45% over the forecast timeframe due to steadily increasing adoption of smartphones across the globe. The worldwide smartphone penetration was over 39% in 2018 and is expected to grow to over 48% by 2022. The players in the market are leveraging on the widespread adoption of smartphones and tablets to increase their customer base, thereby increasing their profitability. Moreover, it also allows companies to launch their services in various price-sensitive regions with an under-developed communication infrastructure. 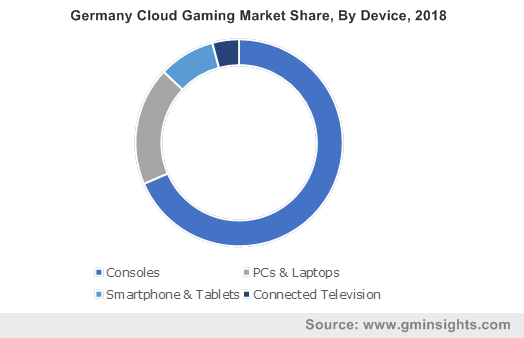 The Business-to-Business (B2B) cloud gaming market is expected to register a CAGR of over 40% during the forecast time duration. The cloud gaming platforms are focusing on signing partnerships with internet service providers and telecom companies to further extend the distribution network of their services. Furthermore, the set-top box manufacturers and telecom operators are showing interest in monetizing their fiber investments. With the increasing deployment of 5G services, particularly in countries such as South Korea, the U.S., and the MEA region, the telecom providers are focusing on forming exclusive contracts with cloud gaming platforms to augment their service offerings.

The Business-to-Consumer (B2C) model is mainly adopted by gaming giants such as Sony, Microsoft, and NVIDIA. The use B2C model reduces the company’s dependency on external stakeholders such as telecom providers and allows the companies to personalize their service offerings to best suit the customer needs. The inherent requirement for high capital expenditure is limiting its adoption among smaller players and start-ups. 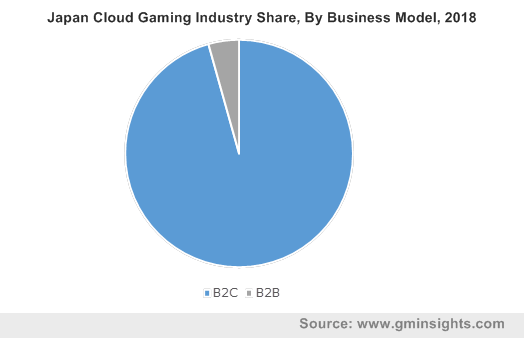 The Asia Pacific cloud gaming market is anticipated to grow at a CAGR of over 46% from 2019 to 2025 due to the increasing number of 5G infrastructure development initiatives in the region. For instance, in April 2019, the major south Korea-based telecom providers, Korea Telecom, LG Uplus, and SK Telecom launched 5G mobile networks nationwide. The rising adoption of smartphones & gaming consoles and constantly surging online population have created a myriad of opportunities to spur the size of the market. In addition, the cost-effective nature of the cloud gaming platforms is promoting its usage across various new customer classes, that were vary of investing in gaming systems due to their expensive nature.

Europe accounted for over 34% of the share in the market in 2018 due to the presence of a large number of gaming enthusiasts and high penetration of gaming consoles such as PlayStation and Xbox. The companies operating in the landscape are introducing their product offerings in countries such as the UK, Germany, France, and the Netherlands due to the presence of robust and high-speed connectivity architecture in the region.

The cloud gaming market is led by prominent players such as Sony, Microsoft, and Electronic Arts. The major players are working on forming partnerships with each other to strengthen their existing cloud gaming product portfolio. For instance, in May 2019, Microsoft entered into a partnership with Sony to jointly develop new & innovative cloud gaming platforms and content streaming solutions. The start-ups in the cloud gaming landscape are forming tie-ups with GPU-as-a-service providers such as NVIDIA, AMD, and Huawei to enhance the performance of their existing streaming services. They are also conducting various R&D initiatives to develop various customized solutions to accommodate as per the changing user requirements based on their geographical location.

The recent advancements in the cloud technology have given rise of the distribution of model of cloud gaming. Cloud gaming provides access to interactive games remotely in the cloud and streams the video sequence back to the user over the internet. This enables devices with lower computational power to run various next-generation and high-quality games. The gaming industrial pioneers, such as Sony and Microsoft, have experienced success in the market on a large scale. The rising price of gaming consoles and other hardware specifications, increasing investments in 5G technology, and simultaneous access of numerous games at affordable prices are the primary factors supplementing the growth of the market.

The cloud gaming market surpassed USD 1 billion in 2018 and is predicted to cross USD 8 billion by 2025, according to a GMI report.
The industry share of cloud gaming to grow at a CAGR of more than 30% from 2019 to 2025.
The Asia Pacific market is anticipated to grow at a CAGR of over 46% from 2019 to 2025 led by increasing number of 5G infrastructure development initiatives in the region.
According to the analysts at GMI, the smartphones and tablets segment in the market is expected to observe around 45% growth rate during the forecast timeframe.
The key industry players are Advanced Micro Devices, Apple, Broadmedia GC, Cloudzen, Electronic Arts, Loudplay, Microsoft, Numecent, NVIDIA, Paperspace, Parsec, Playcast, Playgiga, PlayKey, Rainway, RemoteMyApp, RemotrCloud, Sony, and Wiztivi.
The cloud gaming industry has created a need to partner with other companies to expand the distribution network of the services and boost consumer demand.
Customize this Report
Inquiry Before Buying