Aerospace Sealants Market size worth over $800mn by 2026

Aerospace Sealants Market size is set to surpass USD 800 million by 2026, according to a new research report by Global Market Insights, Inc.

Growing popularity for air travel is likely to encourage the aircraft manufacturers to ramp-up production of aircrafts to cater to the rising demand. Additionally, manufacturers are also focusing on reducing their order backlogs and increasing their aircraft deliveries every year. Moreover, the manufacturers are significantly investing in innovative technologies to improve the fuel efficiency of the aircraft in compliance with stringent regulations. These are some of the factors that will spur the aerospace sealants industry demand.

The Asia Pacific region is estimated to account for the highest market share of global new aircraft deliveries between 2019 and 2038. Also, it is likely to hold almost 42% of the total deliveries. Airlines in Europe and North America will together register for around 36% of the overall freight and passenger aircraft deliveries. Thus, the significant ramp-up in the production of aircraft will drive the consumption for aerospace sealants in the coming years. 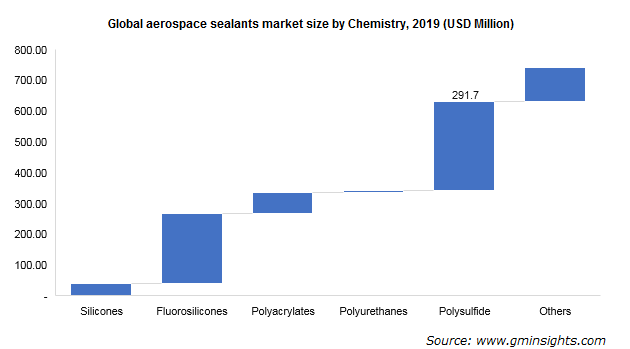 The fluorosillicone segment is estimated to register a steady CAGR of over 3% during the forecast period. Aerospace sealants comprising of fluorosilicone find usage in the sealing of aircraft fuel tanks due to its excellent resistance towards petroleum-based fuel and oil. However, it exhibits poor gas permeation resistance, thus, it is likely to lose its share to other chemistries.

The fuel tank applications will observe a robust growth of almost 5% through 2026. Fuel tanks structures are categorized into integral, rigid removable, and bladder. These structures are prone to leakages which causes trouble to the aircraft manufacturers and service providers. Integrated fuel tanks are positioned on wings that rely on aerospace sealants to ensure no leakage occurs through fasteners and joints.

The regional aircraft segment is expected to grow at 3.5% CAGR from 2020 to 2026. This can be attributed to substantially surging demand for regional jets owing to its optimized seating capacities coupled with a higher operating range. Moreover, these aircrafts are ideal for low-cost long/short haul distance commutes. The rise in the production of regional aircraft propels the market growth.

The operator/airline in-house segment is projected to reach a valuation of USD 55 million by 2026. This is mainly due to fact that, aircraft manufacturers rely on outsourcing aerospace sealants and depend on the suppliers for smooth inventory. Thus, it is going to lose its share to airline third party and independent service providers.

North America dominated the market in 2019 and is predicted to hold around 30% revenue share by 2026 owing to presence of the matured aerospace industry in the region. Boeing, Bombardier, Embraer, etc. are some of the leading aerospace manufacturers. An upsurge in aircraft manufacturing activities coupled with significant air travel rates is expected to augment the marker demand.

Some of the participants in the global market include PPG Industries, Henkel, Dow Corning, 3M, Royal Adhesives & Sealants, Anabond Limited, Flamemaster Corporation, and Cytec Industries. Strategies such as capacity expansions and acquisitions are incorporated by key industry players to gain a significant position in the market.