Military Vetronics Market size exceeded USD 4 billion in 2019 and is estimated to grow at a CAGR of over 4% between 2020 and 2026. The market growth is driven by rapid technological advancements in defense verticals along with increasing scope of electronic weapon systems and unmanned vehicles. 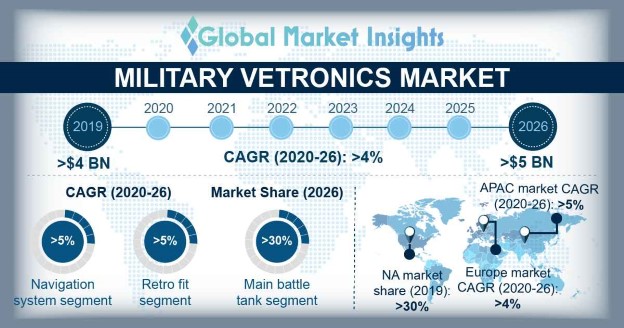 The navigation system segment will witness maximum growth of more than 5% till 2026. Integration of various military vehicles, such as amphibious vehicles, unmanned ground vehicles, infantry fighting vehicles, and mine-resistant ambush protection vehicles, in the army will support the segment growth. These vehicles require precise navigation systems, allowing the army to accurately carry out operations.

To improve the operational accuracy of these vehicles, industry players are integrating their navigation systems with Satellite Communications (SATCOM) systems. Various countries across the globe are trying to establish a framework, where military devices can use a range of SATCOM networks, which include commercial & military networks.

For instance, in May 2019, the USAF had conversations with commercial satellite operators to build a hybrid architecture. This architecture will enable armed forces to switch networks between commercial and military satellites, improving connectivity and reducing chances of cyber-attacks.

The main battle tank segment will capture more than 30% share in the global military vetronics market revenue by 2026. Requirement for battle tanks to serve as the first line of defense and combat during critical situations will cater to the market growth. Aging fleet of battle tanks and introduction of advanced combat vehicles have led to the requirement for new tanks.

The retrofit segment in the market is anticipated to observe a high CAGR of 5% during the forecast timeframe. The growth can be attributed to development of new vetronics systems, out casting existing systems. Developed countries with technological expertise in arms manufacturing are collaborating to accelerate the pace of R&D for these vehicles.

For instance, in February 2020, Germany and France together launched an architectural study on the European Main Ground Combat System (MGCS). The study encompasses potential future development of arms, ammunition, and vetronics in military vehicles.

The North America military vetronics market dominated more than 30% revenue share in 2019. This market penetration can be credited to presence of major defense enterprises, such as General Dynamics, L3Harris, and Lockheed Martin, in the region. These players are extensively investing in the development of enhanced vetronics systems and undergoing government modernization programs.

The Asia Pacific market is predicted to register around 5% gains from 2020 to 2026 driven by combined efforts of various business conglomerates and government bodies to initiate manufacturing facilities across the region.

Companies operating in the market are undergoing custom contracts as per the client requirements to improve their existing market share. For instance, in December 2019, the Danish Ministry of Defense Acquisition & Logistics Organization (DALO) entered a contract worth USD 29.5 million with Kongsberg to integrate its Protector Remote Weapon Station (RWS) with Piranha V 8x8 vehicle.

The military vetronics market research report includes in-depth coverage of the industry with estimates & forecast in terms of revenue in USD from 2015 to 2026 for the following segments:

The market size of military vetronics exceeded USD 4 billion in 2019.
The industry share of military vetronics is estimated to grow at a CAGR of over 4% between 2020 and 2026.
The Asia Pacific market is predicted to register around 5% gains from 2020 to 2026, driven by combined efforts of various business conglomerates and government bodies to initiate manufacturing facilities across the region.
Major vendors in the market include Thales Group, Saab Group, Lockheed Martin Corporation, General Dynamics Corporation, Raytheon Company, Curtiss-Wright Corporation, Leonardo-Finmeccanica S.P.A, Rheinmetall AG, BAE Systems PLC., and L3Harris.
The North America market domination can be credited to presence of major defense enterprises, such as General Dynamics, L3Harris, and Lockheed Martin, in the region.
According to this research report by GMI, the main battle tank platform segment will capture more than 30% share of the global market revenue by 2026.
Customize this Report
Inquiry Before Buying