Pet Cancer Therapeutics Market size is set to surpass USD 432 million by 2027, according to a new research report by Global Market Insights Inc.

Supportive initiatives that aid in increasing awareness among pet owners regarding pet diseases including cancer is projected to prove conducive for the industry growth. For instance, the National Pet Cancer Awareness Month initiated by the Nationwide & the Animal Cancer Foundation to raise funds and promote awareness regarding pet cancer. This campaign raises awareness against multiple pet cancers such as lymphoma, splenic cancer, thoracic cancer, bladder cancer, & oral cancer among others. Moreover, initiatives adopted by some of the prominent players are anticipated to propel the market progression. 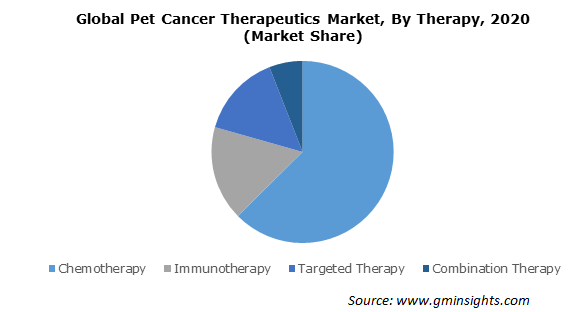 The targeted therapy segment held 14% of the market share in 2020 and is poised to reach more than USD 66 million by 2027. This growth is due to the increasing use of targeted therapy as a potential alternative to conventional chemotherapy treatment and novel advancements. Targeted therapies employ drugs that restrict the progression of cancerous cells by disrupting individually expressed molecules responsible for tumor cell progression, survival, metastasis, & microenvironment.

The injection segment in the pet cancer therapeutics market is projected to cross USD 278 million by 2027 owing to the multiple clinical benefits associated with the injection route of administration. Administering therapeutics using the injection route refers to the introduction of a drug formulation into the bloodstream. This route of drug administration represents the optimal approach to deliver a dose quickly and precisely, as the administrated therapeutics enter into the systemic circulation. This assists in reducing the potential delay concerned with absorption processes, further helping in achieving its intended therapeutic efficacy faster than other routes. Also, the injected medications offer 100% bioavailability as the active ingredient reaches the site of action without undergoing alterations and changes.

Substantial prevalence of cancer among cats will augment the market growth

The cats segment accounted for 4% of revenue share in 2020 and is predicted to witness 8.8% growth rate through 2027. This expansion is credited to the rising prevalence of feline cancer. According to the Flint Animal Cancer Center article, in 2019, approximately one among five cats is estimated to be diagnosed with cancer at some point in their lifetimes. Certain types of cancers are increasingly prevalent in cat species that inflict substantial disease burden and propel veterinary care spending. Lymphoma, mast cell tumour, squamous cell carcinoma, and bone cancer are the most prevalent forms of cancer reported in domestic cats. Cats aged from 2 to 6 years are increasingly susceptible to cancer.

The lymphoma segment capture 24% of the market share in 2020 and is slated to exceed USD 133 million by 2027. High prevalence and incidence rates of lymphoma, especially among dogs are predicted to fuel the market potential. Lymphoma affects the lymph nodes & lymphatic system among pets and has the potential to spread throughout the entire body. Canine lymphoma is a cancer of malignant lymphocytes. The increasing incidence rate of lymphoma is anticipated to influence the need for pet cancer therapeutics, thereby accelerating the industry expansion during the forecast period.

UK pet cancer therapeutics market is poised to expand at more than 11% CAGR during 2021 to 2027 on account of the high prevalence of pet cancer and the usage of facilitative initiatives to promote awareness regarding pet cancer. According to the British Small Animal Veterinary Association (BSAVA), in 2019, the overall incidence of canine cancer was 63 per 100,000 dogs.

Moreover, the number is estimated to surge with the advancing age and rising obesity among dogs. In order to promote awareness regarding pet cancer, several public organizations have adopted initiatives that has encouraged pet owners to undergo cancer diagnosis and opt for adequate pet cancer therapeutics.

Some of the prominent leaders operating in the market are Zoetis Inc., Elanco Animal Health, Merial Inc., Anivive Lifesciences, AB Science, Qbiotics, NovaVive, and ELIAS Animal Health. These companies are engaged in strategic collaborations, partnerships and agreements to gain competitive advantage over their competitors.