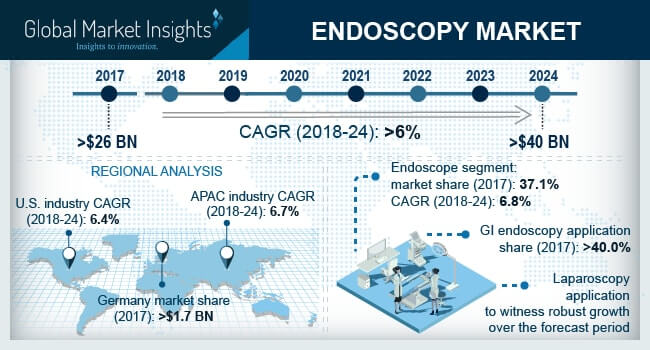 Rising incidences of gastrointestinal disorders will act as major driver for the growth of endoscopy market. Irritable Bowel Syndrome (IBS) is one of the most frequently diagnosed gastrointestinal disorder amongst the American population. In U.S., around 3.5 million people visit physician annually for IBS treatment thereby escalating demand for endoscopy procedures. GI disorders are highly prevalent in geriatric as well as the paediatric population escalating the overall demand for minimally invasive endoscopic procedures.

High preference for technology integrated minimally invasive endoscopes by geriatric population has stimulated growth of global market in developed as well as developing economies. Industry leaders such as Stryker and Fujifilm have been adding improvisations in the endoscopy devices such as developing endoscopes that can detect ovarian tumours even on the mobile. Availability of such efficient and effective endoscopic devices for accurate diagnosis of gastrointestinal, pulmonary and bone disorders have propelled overall global market growth.

Endoscope segment held around 37.1% market share in 2017 and is estimated to grow at a CAGR of 6.8% over the forecast timeline. Growth is attributed to modifications incorporated in the existing endoscopes that have reduced the rate of errors aiding the diagnostic decisions during surgeries. Furthermore, increasing prevalence of gastrointestinal disorders globally has driven the segment growth.

GI endoscopy accounted for over 40.0% market share in 2017 and is anticipated to continue dominating the industry over the upcoming years. Escalating burden of gastrointestinal disorders, leading to increased demand for upper as well as lower GI endoscopy procedures will drive segment growth. Increasing geriatric population, susceptible to suffer from gastrointestinal diseases will positively impact segment growth. As per National Centre of Health Sciences, nearly 14.7 million people in U.S. suffer from chronic ulcers, stimulating demand for GI endoscope.

Laparoscopy segment will witness lucrative growth over the coming years owing to growing demand for laparoscopic procedures. Rising incidences of cancers globally has impacted laparoscopy segment growth positively. According to National Institute of Cancer estimates, there will be around 1,735,350 new cases of cancer in 2018 that will accelerate demand for minimally invasive endoscopic procedures significantly over the forecast period.

The market size of endoscopy exceeded USD 26 billion in 2017.
The industry share of endoscopy is expected to witness growth of more than 6% CAGR from 2018 to 2024.