Robot End-Effector Market size is set to exceed USD 6.5 billion by 2025; according to a new research report by Global Market Insights Inc.

The robot end-effector market is witnessing rapid growth with the implementation of robots in the household, manufacturing, and other applications. Robots as domestic helpers, entertainment robots, and assistive robots for elder & handicapped people, are some of the majorly adopted robots in households. According to the IFR (International Federation of Robotics), the global number of robots in the domestic household applications will rise around to 31 million in 2019 from 2016, augmenting the demand for robot end-effectors. Robots are increasingly used for mowing lawns, cleaning swimming pools & floors, and other tasks. The advancements in the market are enabling highly capable end-effectors such as five-finger humanoid robot hand. The companies have introduced a robot hand, which can perform in multiple motions with 10 degrees of freedom similar to a human hand.

The force-torque sensors are gaining traction in the robot end-effector market with the development of robots to increase more object sensing capabilities. These sensors are called six-axis force-torque sensors as they measure the 3 torques and 3 force components around X-Y-Z axes. The FT sensors play a vital role in controlling the force applied by the robot on the workpiece. These sensors are being widely adopted in assembly, part insertion, and other applications. In October 2017, ATI Industrial Automation introduced a low-cost force-torque sensor Axia80, which is suitable for delicate processes, high force applications, and can switch between two different calibrations. The increasing need for robots to have force-sensing feedback is expected to increase the demand for these sensors. 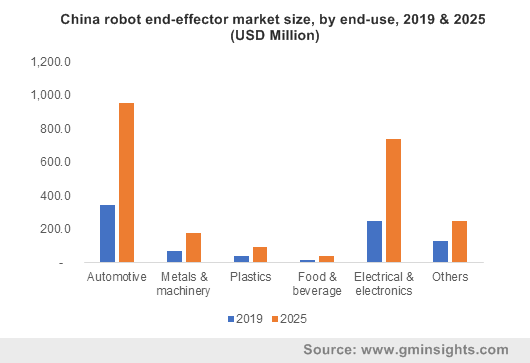 The food & beverage industry will provide attractive growth potential to the market. The Automated Guided Vehicles (AGVs) or Automated mobile Robots (AMR) are highly suitable for materials shifting operations in the food manufacturing companies. In addition, food plants are being equipped with robots for beverage bottling, food packaging, refrigerated meat processing, and other applications. An important benefit of using robot technology in the food & beverage industry is that they eliminate frequent manual manipulation, improving hygiene and performance. Industries such as milk processing require faster operations to ensure product quality and freshness to customers; hence, are highly inclined toward automating the process.

Europe will be one of the key regions in the robot end-effector market with a high penetration rate of automation technologies in manufacturing. The highly developed automotive industry in the region is expected to create a considerable demand in the market. Furthermore, the region is witnessing the growing use of robots in logistics, agriculture, underwater, and other applications. Countries such as Germany are among the major markets for robots. Germany witnessed a 7% increase in robot sales in 2017, according to the International Federation of Robotics. According to the euRobotics, Europe currently holds around 32% of the market in the global robots industry. The strong research & development activities by organizations, such as Bristol Robotics Laboratory, is further boosting developments in the industry.

The higher initial costs associated with the implementation of automation technologies in production lines and other applications can considerably hamper the growth of the market. The other factor that may hamper growth is the need for an update in the current manufacturing infrastructure, which may not be economical. Furthermore, the Robotic Process Automation (RPA) implemented in manufacturing requires higher maintenance costs, which limits their implementation by smaller companies to some extent. Improper maintenance of robot equipment can result in decreased process efficiency in manufacturing, further limiting its usage.

The robot end-effector market research report includes in-depth coverage of the industry with estimates & forecasts in terms of revenue in USD and shipments in Unit from 2015 to 2025 for the following segments: