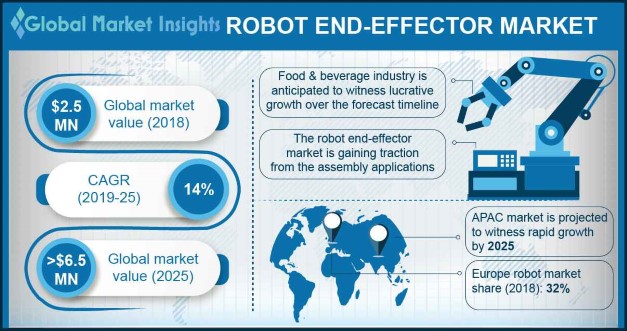 The growing adoption of robots in assisting and performing a number of tasks, such as machine handling, welding, household works, and others, is one of the key factors driving the growth of the robot end-effector market. End-effectors include all devices, which are installed or connected at a robot wrist which interact with the work components or parts to perform a particular task. For instance, the welding torch is used at the end of the robot arm for welding a given component. In addition, the increasing deployment of robots for pick and place operations in logistics industry, palletizing, casting, arc welding, material handling and other applications, the demand for end-effectors have grown significantly.

With the rise of the collaborative robot market, the market for end of arm tooling is projected to further observe greater demands as these robots require more sensors integrated on them to work effectively in a human-robot work environment ensuring safety and security of humans. The advancements in sensor technology have made it possible for these robots to work without the requirement of any custom software. These robots are far more proficient compared to the bulky industrial robots and are increasingly being deployed in manufacturing and supply chain distribution.

The welding guns contribute to a major part in the robot end-effector market due to the increasing use of welding robots in the automotive industry. Manufacturers are implementing them to cut down the costs of direct labor, reduce the process time, and conserve the materials. Furthermore, the welding robots provide benefits such as a safer work environment, no break in production, consistent cycle times, and others, enabling their demand in the manufacturing industries. NIMAK, a robot equipment manufacturer has witnessed considerable growth in the robot welding gun manufacturing in China for companies such as Audi and Volkswagen.

Grippers are largely used in manufacturing processes for material handling applications such as picking up a workpiece. The growing advancements in the robot’s industry are bringing in more capable grippers for specific applications such as robot grippers with flexible fingers, grain-filled flexible ball, and others. The grain-filled flexible ball contains a latex balloon, which sucks in the air from the balloon and transforms into a rigid shape holding the given object without damaging it.

Material handling robots use end-effectors for lifting, transferring, or arranging the materials, components, and others from one location to another. The manufacturers are increasingly adopting these robots as they can automate unsafe, repetitive, and tedious tasks such as material handling in hazardous environments. Companies are developing these robots with higher payload capacity.

The automotive industry is expected to be a major segment deploying the robot’s technologies to improve productivity and quality of products. The automotive manufacturers are increasingly adopting robots to improve work efficiency and reduce warranty costs. These robots are being used for spot welding, painting, assembly, and other automotive operations. In addition, the robots minimize the risks involved by performing dangerous and difficult jobs.

Automakers including Ford Motor Company, TATA Motors, Hyundai, and others, are significantly using these robots for their automotive production to increase the production capacities and cater to the high demand. In June 2019, Ford completed an upgrade of its Chicago plant with an investment of USD 1 billion. The company added 600 robots to this plant for welding, chassis movements, and other functions. 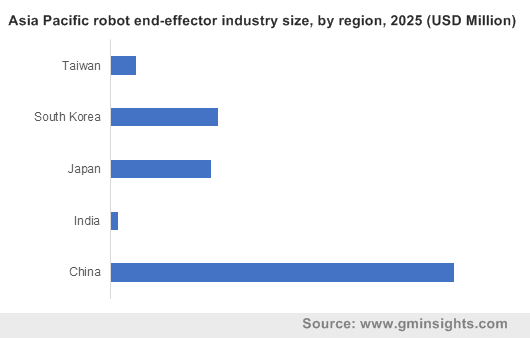 The Asia Pacific region will have rapid growth in the implementation of end-effectors owing to the deployment of a large number of robots in countries such as South Korea, China, Japan, and others. Japan, for instance, is the leading supplier in industrial robotics market and contributes to almost 55% of the industrial robot deliveries in 2017. Japan is also one of the major adopters of robots. According to the IFR, around 297,000 industrial robots were working in the country in 2017.

ABB Limited, Zimmer Group, JH Robotics Inc., Weiss Robotics, Applied Robotics, Piab AB, Robotiq, Destaco, FIPA, Festo, KUKA, Soft Robotics, ATI Industrial Automation, KUKA, and Schunk, are some of the major players in the robot end-effector market. The increasing use of robots in multiple applications is enabling the development of more capable end-effectors. In January 2019, Acutronic Robotics introduced its ROS 2 robot grippers with the collaboration of Robotiq. The company aims to considerably reduce the system integration efforts with these grippers, making it easier to repair, extend, and build the robots.

Companies are introducing grippers, which can be used for a greater number of applications. In June 2019, New Scale Robotics launched its NSR-PG-10-20-URe Precision Parallel Gripper with a measurement precision of 2.5µm. This gripper is highly suitable for assembly tasks, handling intricate parts, and lab automation processes. In March 2019, ABB Limited announced the expansion of its advanced manufacturing operations in the Senatobia, Mississippi (U.S.). The company invested USD 36 million for its expansion.

The end-effector allows robots to perform specific tasks such as painting, assembly, palletizing etc. Robots use a tool for processing an operation and the spindle is used to conduct the machining work such as grinding, drilling, and others. The penetration of robot technologies into multiple application areas has resulted in the development of a number of end-effectors such as material removal tools, collision sensors, tool changers, force-torque sensors, and others. The improvement in the product quality, faster time to market, increasing efficiency & productivity, and reduction in the wastage are major factors influencing the use of the robot’s technologies in industries.

The market size of robot end-effector exceeded USD 2.5 billion in 2018.
The industry share of robot end-effector is estimated to grow at over 14% CAGR between 2019 and 2025.
According to this forecast report by GMI, the global unit shipment is expected to grow at a CAGR of over 22% from 2019 to 2025.
Robots end-effectors are capable of increasing speed and consistency of production lines and can effectively be used to apply the adhesives and sealants with precision whilst eliminating human errors.
Robotic welding guns are significantly used in the automotive industry to cut down direct labor cost, reduce process time, and avoid material wastage while providing a safer work environment.
Customize this Report
Inquiry Before Buying