Precision Guided Munitions Market size is set to surpass USD 45 billion by 2026, according to a new research report by Global Market Insights Inc.

The rising defense budget allocation toward the procurement of ammunition is fueling the precision guided munition industry growth.  Countries across the globe are engaged in upgrading their existing ammunition capabilities in order to safeguard their borders. 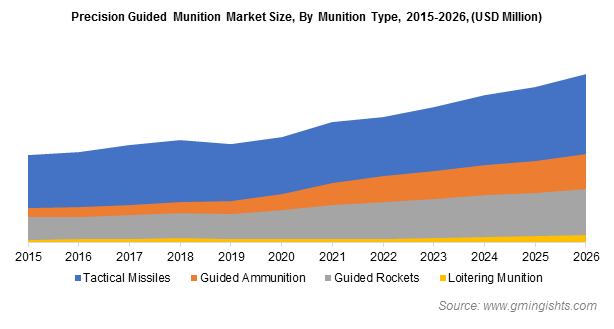 North America precision guided munitions market captured more than 25% revenue share in 2019 and is projected to expand at 8% CAGR through 2026. Number of market players present in North America is one of the major factors driving the regional market growth. Five out of top ten global defense players including Lockheed Martin, General Dynamics, BAE Systems, Boeing, and Raytheon have headquarters in the U.S. These market players extensively invest in R&D.

The Inertial Navigation System (INS) segment size surpassed USD 7.5 billion in 2019. INS used the concept of dead reckoning along with the integration of various sensors and mechanical components. This makes INS most accurate, versatile, and easy to operate navigational systems. INS has found its application in numerous ammunitions including guided rockets and tactical missiles.

The MEA market valued at more than USD 4 billion in 2019 and is anticipated to witness growth of over 7% from 2020 to 2026. The growth can be attributed to efforts taken by the governments of Gulf countries toward modification and advancements of their existing weapon systems.

Increasing investments for the development of advanced precision guided munition created a positive market outlook. Industry players are engaged in delivering customized solution as per client requirement. This helps to build long-standing relationship among customers with the enhancement in revenue share.