Home > Pressrelease > Gaming Consoles Market worth over $35bn by 2027

Gaming Consoles Market Size is set to surpass USD 35 billion by 2027, according to a new research report by Global Market Insights Inc.

The integration of Augmented Reality (AR) and Virtual Reality (VR) with the gaming consoles will drive the market growth. These technologies develop a realistic image, high-quality sound, and dynamic sensations. They provide an imaginative setting that enhances the user's physical presence in the gaming environment; furthermore, users can discover a virtual world controlled by their body movements & gaming console. The growing availability of headsets that support AR and VR technologies is expected to accelerate the market expansion. AR and VR combine real-world data with computer data, enabling players to interact with computer-generated characters on the screen, boosting the market progression globally.

The COVID-19 pandemic had moderately impacted the gaming consoles market value in the first half of 2020 due to global lockdown. The industry witnessed shipment delays owing to disruptions in the supply chain. On the other hand, as the majority of the global population was home quarantined, the number of casual gamers increased, supporting the industry growth. The gaming industry showcased significant growth is credited to the foster in demand for gaming consoles in the second half of 2020 when lockdowns were eased, and industrial activity resumed. This helped various prominent market leaders to introduce premium and high-performance gaming consoles. 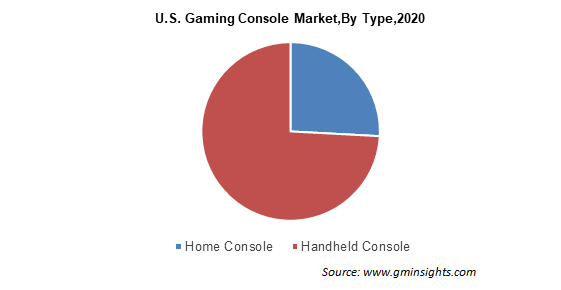 The gaming consoles market is growing significantly attributed to the increasing demand from both developed & developing economies such as the UK, Germany, the U.S., India, and China. Young working professionals with significant disposable incomes are becoming increasingly addicted to dynamic motion graphics and real-time gameplay experiences, fueling the industry expansion. Due to rising average spending, market leaders are adopting aggressive business development strategies by introducing multi-functional and portable gaming consoles. Manufacturers also use differentiated product development strategies by including regional games to achieve a competitive edge in the market.

The commercial sector is poised to observed 9% growth rate through 2027 led by the increasing demand for Games as a Service (GaaS). In a Games as a Service environment, cloud gaming service providers are focused on high-end graphics-heavy games, which typically require complex hardware and gaming consoles to function seamlessly. The increasing adoption of cloud gaming services by professional players for international game tournaments will aid the overall industry value.

Moreover, companies are integrating cloud services into gaming consoles to offer video-on-demand game content and remote access to commercial users. The commercial gaming consoles sector is growing, which is attributed to the growing number of e-sports and live streaming of the gaming content by professional gamers. Professional gamers compete around the world in events such as the International FIFA 20 (PS4) Open Cup, Casual Connect Europe, and the London Games Festival.

A sharp rise in the number of active gamers owing to the increasing popularity of e-sports events will fuel the industry revenue. APAC offers high growth opportunities due to the increasing internet penetration coupled with the growing tech-savvy population. Customers in this region are participating in various e-sports tournaments, thus increasing the demand for gaming consoles. Furthermore, various regional players are creating a gaming league, which is a dynamic and inclusive community of professional gamers, an online tournament organizer, and a promoter of community content.

Companies are focusing on R&D to launch innovative solutions