Explosives and Pyrotechnics Market Size worth $23bn by 2025

Explosives and Pyrotechnics Market  size will surpass USD 23 billion by 2025; according to a new research report by Global Market Insights.

Strengthen by rising mining activities in countries such as the U.S., Indonesia, China, South Africa and many others, global explosives market is anticipated to achieve significant growth rates in the near future. However, pyrotechnics market is expected to be driven by growing cracker shows and events in various festivals, occasions and sports events. Increasing coal mining activities to fulfill power generation needs is the major factor influencing the market growth.

Countries such as Indonesia have strict government policies to generate almost 50% of power from domestic coal which in turn is increasing mining operations and hence expected to positively influence the explosives and pyrotechnics market growth by 2025. 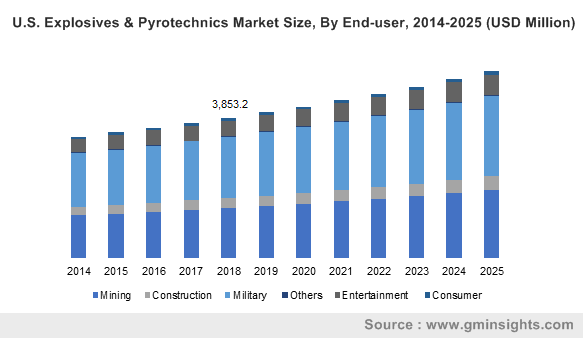 Strict government regulations regarding reducing carbon footprints is the major restraint to global explosives and pyrotechnics market growth. As coal mining is the key demand source in this market, it is hugely influenced by Paris climate accord applicability all across the globe. Paris climate agreement aims to keep the temperature rise below two degree Celsius globally. As the agreement has been signed by 175 countries, the implications can be seen easily on the global market growth in the coming years.

End users of explosives market include mining, construction, military and others. Military segment constituted approximately 45% in the overall market. The segment growth is largely influenced by ongoing political unrest in African countries, Europe and the Middle East. Increasing sports and hunting activities are also anticipated to drive explosives demand for arms and ammunition. Apart from this, military spending has also increased significantly in the U.S. in explosives and defense products.

Mining held a share of around 40% in the global market. Infrastructure growth in developing economies mainly China, demands for commodities such as coal, iron ore and copper which is influencing mining activities and thus likely to influence the market growth. Also, technological advancements in the sector to reduce health hazards in high risk in blasting and drilling operations is expected to influence the overall explosives and pyrotechnics market growth by 2025.

The end user industries of pyrotechnics market cover entertainment, consumer and others. Pyrotechnics are majorly used in entertainment industry on occasions or festivals. There are several musical bands which utilize pyrotechnics to improve the visuality in live shows. Festivals are a major influencer in this market. For instance, National Pyrotechnic Festival which happens in Mexico is an event celebrated annually to support country’s tradition and usage of fireworks. Also, let off fireworks is another very popular festival in China celebrated in Lunar new year which include burning fireworks and crackers in the event.

Asia Pacific and North America are the major regions having highest growth in the explosives and pyrotechnics market. Asia Pacific constituted a share of around 35% in the global market in 2018. Demand from Asia Pacific is largely concentered on mining industry as the region comprises of major coal producing countries such as Indonesia, Australia, India, China and many others. China has added a capacity of around 195 million tons in coal mining in 2018. Also, NEA approved another 7 major coal mining projects totaling a capacity of 22.5 million tons in 2019. As China is the major coal producer, the addition activities in mining sector is expected to drive the demand for explosives in the industry in the near future.

Explosives and Pyrotechnics Market research report includes in-depth coverage of the industry with estimates & forecast in terms of volume in kilo tons & revenue in USD million from 2014 to 2025, for the following segments: