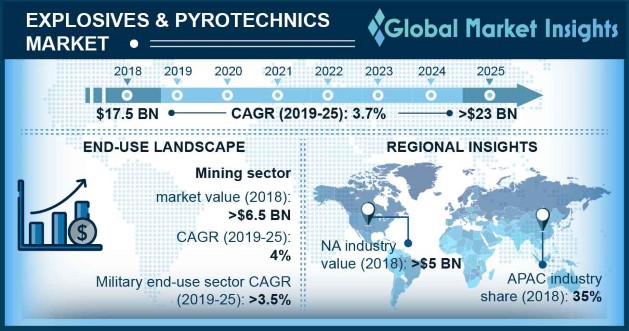 Growing mining operations in the U.S., Australia, Russia and South Africa along with rising consumer demand for outdoor cracker shows in sports events and personal events such as weddings, is analyzed to be the key factor propelling explosives & pyrotechnics market size over the forecast timeframe. According to USGS National Minerals Information Center, the U.S. mines produced approximately USD 75 billon of minerals/metals in 2017, which increased by 6% from the previous year. These trends are anticipated to continue and will drive explosives demand owing to its application in drilling and blasting at the mining and construction sites. Blasting and explosives technology is an integral part of any mining process. It is used in both open pit as well as underground mining operations. Coal mining is among the biggest industrial segments in 2018. Massive dependency on coal for power generation applications is likely to trigger mining activities which will have subsequent positive impact on the overall market size in the upcoming years. For instance, energy undersupply in many countries along with growing population will drive coal based energy generation. Moreover, minerals and ores mining has also picked up pace in the past few years in Africa, Latin America and Asia Pacific which will further complement the market growth by 2025.

Arms & ammunition industry has grown significantly in the past few years. Hunting activities in Europe and the U.S., political unrest in Africa, sports and increasing defense spending are some of the factors forecast to positively influence the arms & ammunition demand by 2025. The global military expenditure was roughly around USD 1.5 trillion in 2010 and is estimated to reach USD 3 trillion by 2025. The U.S, India, China, and European countries have substantially increased their arms & ammunition spending in order to strengthen their armed forces. Furthermore, growing need for technology advancements and smart weapons will further complement explosives & pyrotechnics market size in the forthcoming years.

Formulations of stringent environmental legislations from regulatory body including the EPA is likely to hamper the overall market growth by 2025. This is mainly due to the fact that secondary explosives including TNT, RDX and HMX are widely applicable in large quantities for open pit & underground mining, construction and in military applications. Substantial harm caused to humans, animals and the environment due to noise and pressure released during blasts for carrying out mining operations will make a negative impact on the overall market size in the coming years.

Explosives & pyrotechnics market size for mining was valued at over USD 6.5 billion in 2018 and is projected to witness gains close to 4% in the forecast timeframe. Increasing ores, minerals and energy demand are the key factor driving industry growth for this segment. Rising consumer demand for opulent minerals such as diamond, will also contribute significantly to the overall market growth by 2025. On the other hand, construction segment was valued close to USD 2 billion in 2018. Explosives are widely applicable in quarrying and civil engineering such as tunnel, dam, road construction, etc. Rising investment by the regional government of emerging economies to boost construction output and thus region’s economy will make positive impact on market share by 2025.

Military is projected to witness gains more than 3.5% CAGR over the forecast timeframe. Majority of law enforcements bodies across the world are showing their interest in increasing investments in the development of their regional military and defense sectors. Another factor driving the market growth the rise in terrorist attacks. With a rise in high proportion of militant organizations performing terror attacks, the defense agencies will improve their efforts to protect civilian areas from attacks and threats. These trends will in turn propel the product demand and thus will result in driving market demand by 2025. 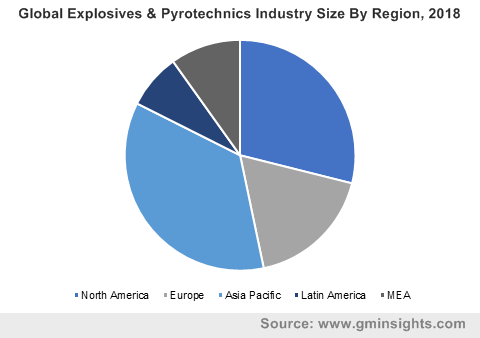 North America explosives & pyrotechnics market size was valued over USD 5 billion in 2018. The regional growth is mainly driven by increasing government spending in arms & ammunitions to strengthen their defense forces. Furthermore, shale gas exploration in the U.S. will boost industry growth for mining applications. Additionally, presence of major companies in the U.S. engaged in pyrotechnics will favor business over the forecast timeframe.

Asia Pacific, mainly led by China and India, dominated the global market share in 2018. The presence of major mining industry players in Australia along with presence of gold & coal reserves are the crucial factors likely to drive the overall regional by 2025.

Most of the industry participants are engaged in commercial explosives export to meet the increasing product demand globally. For instance, Orica Mining Services exports the product and has presence in over 100 countries. In addition, the industry players are involved in production capacity and geographic presence expansion to achieve competitive advantage in the value chain.

Commercial explosives are broadly used in construction and mining projects to break huge rock into simpler pieces. Construction and mining projects are highly dependent and are not feasible without explosives usage. Mining is carried on an escalating rate to meet the growing minerals demand. For instance, rising demand for coal, cement, steel, aluminum, copper and various other metals from several end-user industries such as transportation, construction, automotive, etc. will in turn drive the product demand which trigger market growth by 2025. In addition, majority of explosives manufactured globally are consumed by the mining sector. Mining sector is witnessing promising gains in Africa owing to availability of natural ores and minerals in the region.

The global explosives & pyrotechnics market is contributed by increasing military spending in the U.S., Europe and Asia Pacific. The countries in the region are engaged in upgrading their military strength. Explosives plays a crucial role in arms & ammunition production. Pyrotechnics industry is likely to witness average industry growth over the forecast timeframe. Fire shows have been an integral part in function such as opening ceremony of any sports events which will boost industry growth by 2025. However, stringent environmental legislations related to explosives fumes, which are harmful for the biodiversity, may hamper industry growth.