The AFC systems market is expected to witness an accelerated growth over the forecast timeline due to the rising implementation of smart card technologies for fare collection. The smart card systems are widely used in public transports as they accelerate the fare collection process and facilitate the processing of various fare structures such as time-based and distance-based fare structures. The promising development of the road & rail transport infrastructure globally is also accelerating the implementation of AFC systems. For example, in October 2015, the U.S. Department of Transportation invested USD 38.5 million for the development of a new Bus Rapid Transport (BRT) system known as Vine in Clark county. By installing these systems at railway stations and bus stops, the transport authorities can provide enhanced services to commuters as these systems allow seamless integration between transport modes and payment mechanisms.

The AFC software market is expected to grow at a CAGR of over 10% due to the wide usage of automatic fare collection software to help the transport authorities in managing back-end operations. An ideal AFC software helps in reducing the operational time, aids in transaction monitoring, and security & access concerns. Software solutions provided by various providers include middleware, Database Management Systems (DBMS), mobile platforms, Software Development Kits (SDK), and others. 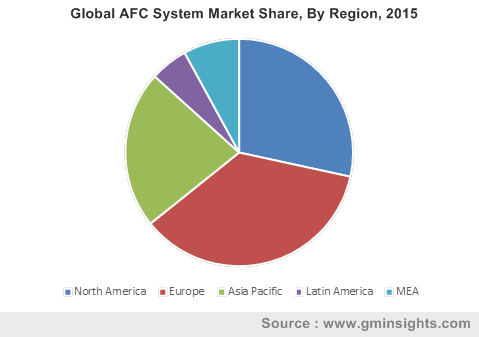 The NFC market is anticipated to exhibit a growth rate of over 10% due to the growing integration of technology across smart card readers, ticketing gates, and POS terminals. This technology reduces cash handling, manual interaction, and has high compatibility with various fare collection platforms. The growing demand for open payment solutions and the rise in cost of contactless smart cards are driving the demand for cutting-edge technologies in the arena of AFC systems. NFC technology is gaining prominence as it is short-range and has built-in security, making it a preferable choice for conducting mobile payments.

The Latin America AFC systems market is expected to show an unprecedented growth rate over the forecast timeline due to favorable government initiatives to implement secure identification transit systems and the increasing migration of commuters toward online payment platforms.  To improve public transport, government agencies in countries including Brazil and Mexico are increasingly investing in implementing fare collectors for public transport, which will support market growth.

The companies operating in the AFC systems market are focusing on partnerships and new product launches supported by product innovations to sustain in the competitive market. For example, in November 2016, ACS Ltd. announced the launch of ACR1255U-J1 Secure Bluetooth NFC Smart Card Reader. It was designed to cater to the recent shift of users from desktop to the mobile platform using Bluetooth technology to avoid contact and alleviate convenience. In October 2015, Sony announced that it had entered into a strategic partnership with PT Telkom Indonesia to develop an NFC common platform based on Sony's FeliCa technology.

The automated fare collection (AFC) systems market research report includes in-depth coverage of the industry with estimates & forecast in terms of revenue in USD from 2012 to 2023, for the following segments: