Aircraft Refueling Hose Market size is estimated to reach USD 2.5 billion by 2025; according to a new research report by Global Market Insights Inc.

The proliferating demand for military jets for special purpose missions coupled with the increasing tanker size for supporting aerial refueling operations will drive the aircraft refueling hose market growth. The significant product demand is further propelled by the rising defense budget, including the U.S., China and India, along with the increasing commercial airplane deliveries. For instance, in March 2019, China government announced its defense budget that will account for USD 177.61 billion with an increase of around 7.5% compared to the previous year.

Rising low cost carriers demand will positively enhance aircraft refueling hose market size. Increasing adoption of low-cost carriers can be attributed to the availability of a vast network of routes at lower fares. Additionally, airliners are focusing on reducing extra services given to customers for free and offering packages at standardized rates, supporting the lowering of air fares. 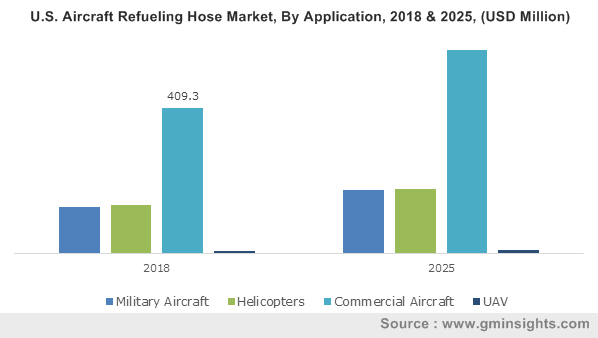 Growing demand for advanced refuellers and sales is driving the aircraft refueling hose market size over the study timeframe. Availability of wide range of built-in hose assembly with different diameter will further support the business growth. For instance, in 2018 FTI started manufacturing aircraft fuel hose assembly along with test and management services.

Industry participants are continuously investing in R&D to retrofit new technologies for enhancing the system performance. For instance, in 2017, Australian air force signed a research agreement with Airbus to develop automatic fueling capability. The products can be retrofitted to existing jets including certain hardware changes and software upgrades providing a positive outlook for aircraft refueling hose market share.

Stringent government regulations across the globe mandating periodic maintenance of products and replacements of old products not meeting the standards are supporting the revenue generation. For instance, according to the regulation of FAA shelf storage life for such product is maximum 2 years and maximum life is 10 years from the date of manufacturing.

Helicopters will showcase a considerable growth in the aircraft refueling hose market size on account of the rising prevalence for Helicopter In-Flight Refueling (HIFR) systems. Upsurge in the tourism industry is significantly contributing to the growing demand for helicopters. Moreover, increased applications of helicopters in several industries, including oil & gas and mining, along with the installation of refueling hoses for increased reliability and higher fuel flow assurance will further propel the market size till 2025.

North America will witness around 3% CAGR in the aircraft refueling hose market share owing to the increasing investments by industry participants to advance technologies. For instance, in February 2016, Boeing tanker KC-46 carried out the successful fueling of F/A-18 during its flight. Additionally, the deployment of multiple tankers with probe & drogue systems including the KC-130, C-160 NG, and KC-135 will further support the aircraft refueling hose market expansion over the projected timeframe.

Aircraft refueling hose market research report includes in-depth coverage of the industry with estimates & forecast in terms of volume in thousand units and revenue in USD million from 2013 to 2025, for the following segments: