Rising aircraft maintenance, repair, and overhaul (MRO) activities would boost the growth in aerospace & defense chemical distribution market. The global air transport MRO demand has been estimated to be around USD 64.3 billion in 2015 and would generate around USD 96 billion by the end of the forecast time period. The key reasons that are driving the global MRO demand are the rising need for the replacement of aging aircraft and increasing air travel demand across the globe.

Air travel demand have been growing exponentially over the past decade, especially in the emerging economies, owing to growing population and rise in middle-class income in India and China. This trend will enhance the aircraft demand in the near future. Such rise in the passenger aircraft demand will further boost the aerospace & defense chemical distribution market in the coming years. Although, stringent government regulations for aerospace chemicals could hamper the growth in the market over the study period. Various authorities like Federal Aviation Authorities, Joint Aviation Authority, etc. have provided various standards and limits to maintain the cabin air quality. This restrains the market for non-compliant products but provides incentive to products meeting regulation criteria. 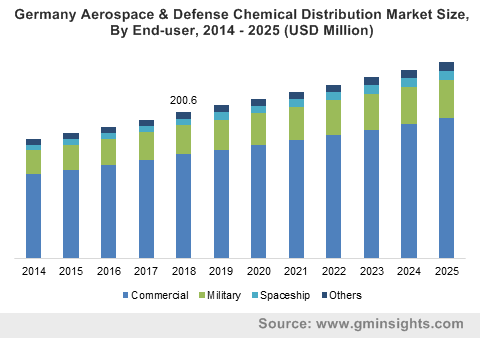 Based on products, the aerospace & defense chemical distribution market is segmented into adhesives & sealants, paints & coatings, oils & hydraulic fluids, lubricants & greases and cleaners & solvents. The demand for cleaners & solvents in the aerospace industry is likely to be very high due to its frequent usage. Adhesives & sealants would attain a market share of about 15% owing to its major usage in aircraft manufacturing process. Adhesives used in the aviation industry includes epoxy based, structural acrylics, water based, and solvent based. Epoxy based adhesives are majorly used to impart weight reduction and strength to the aircraft, whereas acrylic based are used for bonding electric motors to magnets.

Aerospace chemicals distribution takes place through different channels. They are distributed either directly by manufacturers, independent distributors, or through brokers. The demand for the product depends both on the demand for new aircraft and on the demand for maintenance & repair during the life cycle of an aircraft. This encompasses original equipment manufacturers (OEMs) and aftermarket.

Defense segment generated a market revenue of about USD 800 million in 2016. This segment includes combat and non-combat aircrafts. This segment will have considerable product demand in the upcoming years due to growing investment in the defense sector by the major economies.

After Asia Pacific, Europe is another important regional market owing to the size of its aerospace industry. Extensive use of the product in manufacturing & maintenance of aircrafts is projected to drive aerospace & defense chemical distribution market in the coming years. France attained a significant share in Europe region due to its flourishing aircraft production. Rising demand for air travel in EU countries will further boost the demand for the market over the study period.

The A&D chemical distribution market research report includes in-depth coverage of the industry with estimates & forecast in terms of volume in Kilo Tons & revenue in USD Million from 2014 to 2025, for the following segments: