Ablation Devices Market size is set to exceed USD 25 billion by 2025; according to a new research study published by Global Market Insights, Inc. 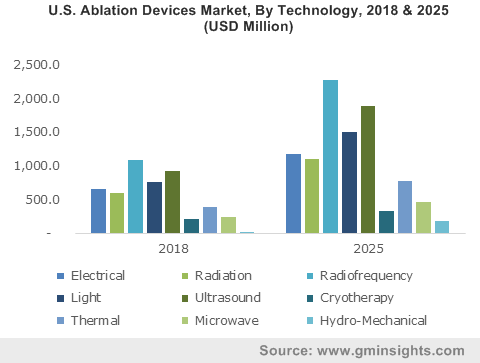 The U.S. ablation devices market is the largest in the world and projected to expand at a CAGR of 10.5% over the forecast period. During the forecast timeframe, it will continue to grow with stable growth and lead the industry at a global level. Rising adoption for minimally invasive medical devices will aid in growth of ablation devices market. Reimbursement and insurance policies by Center for Medicare and Medicaid (CMS) will foster regional growth in the foreseeable years. High healthcare expenditure, increasing geriatric population, and rising venture capital investments by manufacturing firms should drive the U.S. ablation devices market during the projection years.

Some of the key industry players operating in the global ablation devices market are Medtronic Plc, Boston Scientific, Abbott Laboratories, Alcon Laboratories, Angiodynamics, Atricure, Biosense Webster, CONMED, Elekta AB, Varian and Johnson and Johnson. The industry participants emphasize on acquisitions and mergers, geographical expansion and novel product developments to strengthen their position in the market and gain competitive advantage over its peers.

Ablation devices market research report includes in-depth coverage of the industry with estimates & forecast in terms of revenue in USD million and units from 2014 to 2025, for the following segments: