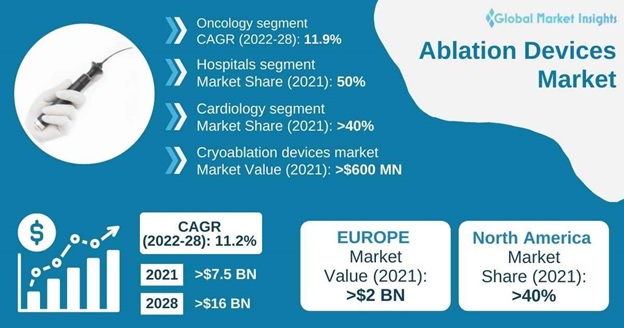 However, stringent government approval is one of the major reasons hindering the market growth. Also, complications related to ablation procedures, reuse of ablation devices in developing economies and high cost associated with ablation procedures might hamper the market expansion in certain emerging regions.

Disposable ablation devices market value was around USD 5159 million in 2018 and is expected to witness lucrative growth in the coming years due to low cost and repeated demand from end-users for ablation procedures. 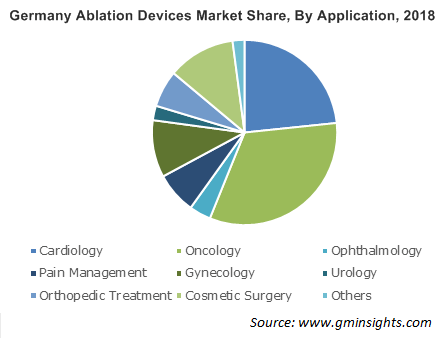 Pain management ablation devices market will register a growth of more than 10.8% till 2025. Pain management ablation is a minimally invasive procedure in which the nerve fibers carrying pain signals to the brain are destroyed to reduce or stop the pain. This procedure provides relief for people with chronic pain in parts such as arthritic joints, lower back, and neck.

Oncology application segment size was over USD 4,173.8 million in the year 2018 owing to better potential benefits than other medical treatments of cancer and lower post procedure stay in hospital in comparison to open surgery.

The hospitals segment accounted for USD 7,912.5 million revenue in 2018. A substantial proportion of ablation procedures happen in hospital settings with the budget of hospitals being higher than other healthcare settings. During the forecast period, hospitals will continue to remain the largest end-use segment, owing to increasing ablation procedures in hospital settings coupled with rising supply agreements of ablation devices between manufacturing firms and hospitals. 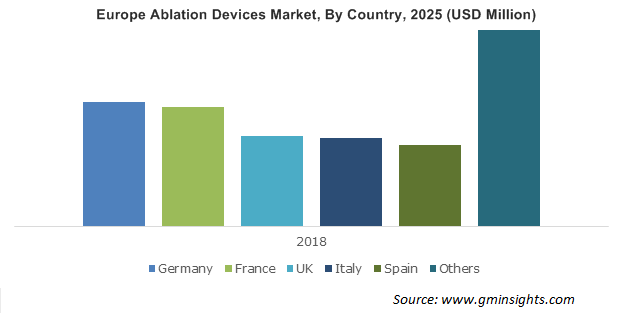 The ablation devices market research report includes in-depth coverage of the industry with estimates & forecast in terms of revenue in USD million and units from 2014 to 2025, for the following segments:

The market size of ablation devices exceeded USD 12.7 billion in 2018 and is poised to grow at over 10.4% CAGR between 2019 and 2025.
Medtronic Plc, Boston Scientific, Abbott Laboratories, Alcon Laboratories, Angiodynamics, Atricure, Biosense Webster, CONMED, Elekta AB, Varian, Johnson and Johnson are some of the major industry players operating in the global market.
Reusable ablation devices will expand at a CAGR of 10.3% through 2025. This growth is attributed to factors such as reduction in medical waste associated with reusable ablation devices and lower costs.
U.S. dominated the North America market, with a valuation of USD 4,902 million in 2018. High disposable income and various reimbursement policies in the country will enable patients to opt for ablation procedures.
Customize this Report
Inquiry Before Buying