System on Module Market size estimated at around USD 1.5 billion in 2020 and is poised to grow at a CAGR of 12% CAGR from 2021 to 2027. Increasing demand for self-driving automobiles and advancements in autonomous and unmanned technology are the major factors propelling the market growth. SoM is experiencing an increasing demand from safety systems such as ADAS, drivetrain & fuel injection systems, and infotainment systems. The growing integration of electronic equipment into smart cars to allow continuous communication and wireless networking across vehicle systems will support the market expansion. 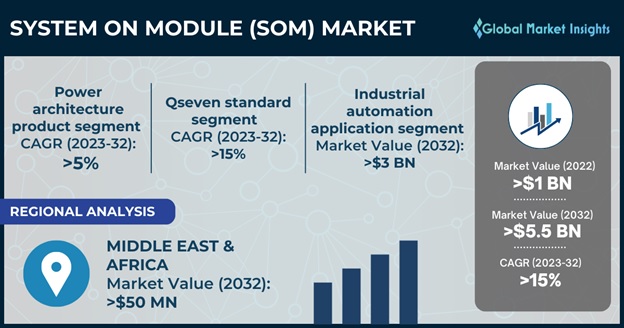 Major players in the automobile industry, such as Toyota, Ford, Tesla, and Renault, have already started developing completely autonomous vehicles, encouraging the OEMs to launch new automotive-grade products. For instance, in June 2021, MicroSys Electronics announced the launch of its latest SoM integrated with NXP processor, S32G274A. It is an automotive gateway platform with application support for commercial vehicles, mobile machinery, and a variety of other functional safety uses.

The COVID-19 pandemic has had adverse effects on the system on module market with product development delays. Several regulations imposed by government and international trade barriers have created a supply chain bottleneck for manufacturers. In the first half of 2021, the market is however gradually gaining traction owing to the growing need for AI and 5G technologies. Companies are looking forward to developing integrated software and hardware for embedded computing platforms. Furthermore, the continuous development of wireless devices to remotely monitor patients is supporting the demand for SoM in the medical sector.

The ARM architecture dominated 50% of the system on module market share in 2020 and is anticipated to witness 13% growth rate through 2027. The growth is credited to the lower complexity offered by ARM-based processors compared to x86 processors in various boards and modules. ARM are in great demand for a variety of consumer electronic devices such as tablets, smartphones, multimedia players, and other wearable devices due to their single cycle processing and limited instruction sets, fostering the industry growth.

ARM aids to improve board and module agility, power economy, and reduce complexity, boosting the system on module market revenue during the forecast period. Several market participants are heavily active in updating their SoM product offerings to cater to high growth opportunities in technology such as IoT and 5G. For instance, in April 2021, Xilinx, a programmable SoC manufacturer based in the U.S. has introduced its latest Kria portfolio of adaptive SoM aiming to assist clients in developing vision AI solutions for smart industries and cities. It also has 4GB of DDR4 memory and 245 I/Os supported by Quad Core ARM Cortex processor. It allows developers to construct visual AI applications with more than three times the speed of GPU-based SoMs while using less latency and power. 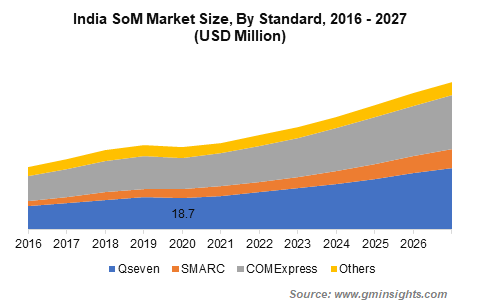 The Qseven standard segment in the system on module market held 35% of revenue share in 2020 led by the growing implementation of this standard in the manufacturing of nano & small SoM devices. It features a standardized form factor of approximately 70mm by 40mm and offers great performance, making it an ideal choice for space-constrained applications such as portable medical devices, intelligent industrial control systems, and home energy management systems.

Embedded system engineers use Qseven modules as they support both x86 and ARM platforms. Moreover, SoM market leaders are constantly active in the creation of new systems based on modules that meet the Qseven standard to cater to the high competition in the industry. 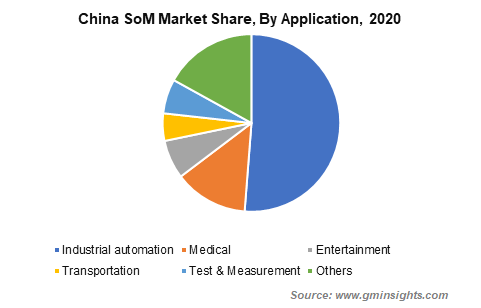 The industrial automation segment captured 45% of the system on module market share in 2020 and is expected to expand at a CAGR of 13% by 2027. The industry progression is attributed to the rising acceptance of industrial robots for automation in various manufacturing processes. Riding trend toward smart factories has augmented the deployment of industrial robots and other modern automated technologies, such as Human-Machine Interface (HMI) and Programmable Logic Controllers (PLC), adding to the industry demand.

In comparison to ordinary modules, the SoM offers several advantages, such as high performance, reduced footprint, and great energy-efficiency, impelling its market value in automation equipment and smart factories. According to the International Federation of Robotics (IFR), sales for industrial; robots in China has increased by 19% in 2020. The growing use of industrial & service robots to improve production productivity will drive the industry revenue in the coming years. 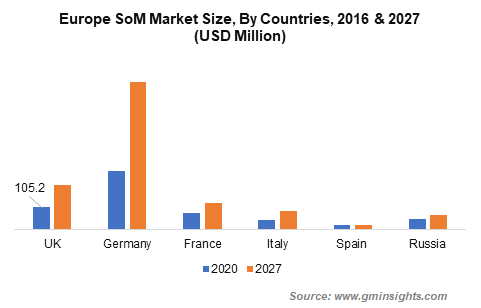 Europe system on module market accounted for 40% of revenue share in 2020 and is predicted to showcase 11% gains during 2021 to 2027. The market progression is credited to the increasing adoption of new disruptive technologies such as AI and IoT among various sectors such as medical and industrial in the region. System on module is also integrated into wearable medical equipment such as optical heart rate monitors, pulse oximeters, fit bits, and blood glucose monitors. The ongoing development of AI-based therapeutic & diagnostic devices for various medical applications such as real-time diagnosis and remote patient monitoring, will further support the market. Several government measures to promote the acceptance of AI and other digital technology in Europe will help the market expansion in the coming years.

Focus on new product development to remain competitive in the market

The system on module (SoM) market research report includes in-depth coverage of the industry with estimates & forecast in terms of revenue in USD from 2016 to 2027 for the following segments:

Industry size of system on module had surpassed USD 1.5 billion and will expand at a CAGR of 12% through 2027.
Key system on module market players includes AAEON Technology, Inc., Advantech Co., Ltd., Congatec AG, Microchip Technology, VIA Technologies and many more.
ARM architecture captured 50% of SOM market share and will grow at a 13% rate through 2027 due to their lower complexity.
Oseven standard segment had accounted 35% of the market share in 2020 as it has a standardized form factor of nearly 70mm by 40mm and offers excellent performance.
Industrial automation held 45% of revenue share in 2020 and will grow at 13% CAGR by 2027 owing to the growing usage of industrial robots.
Europe system on module market captured 40% of revenue share and will record 11% gains by 2027 with rising government initiatives for promoting digitization and growing adoption of IoT and AI across various sectors.
Customize this Report
Inquiry Before Buying