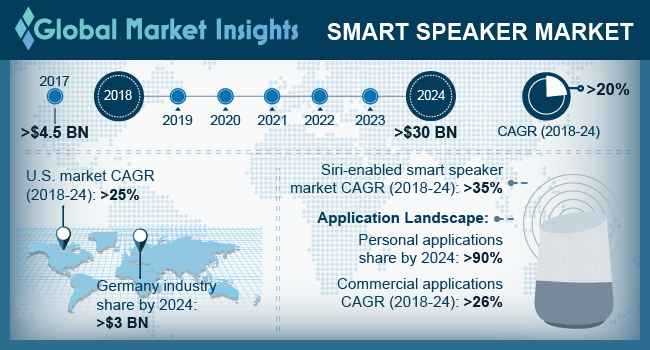 Rising penetration of the IoT technology is expected to propel the worldwide smart speaker market growth over the forecast timespan. A variety of smart electronic devices is increasingly keeping users connected to the internet and the network of connected devices in addition to smartphones. These devices include features such as social networking applications, gaming, weather information, e-book readers, music players, digital camera, and GPS navigation. A strong growth is observed in the fields of the Internet of Things (IoT) and connected devices due to the reduction in computing costs and growing Wi-Fi connectivity. The growth in the use of smartphones and the deployment of data-friendly networks, such as 3G and 4G, are expanding the network connectivity across the globe. This is increasing the proliferation of these devices across the consumers of smart technologies.

In addition to the provision of sound and entertainment, these devices have extended their functionality to include several other applications such as live music & news streaming, problem-solving, setting reminders, and ordering of household supplies. The integration of the virtual assistant software has established new pathways for the market expansion. Virtual assistants are projected to undergo a high growth over the forecast period and various companies have leveraged this opportunity to launch products integrated with virtual assistants.

Impounding security issues are major factors restraining the global market value. These devices are developed with the prime focus on listening to the vocal commands from the users. The microphone within these systems hear the command keywords even when the devices are idle. This allows the personal customer data to be registered over the internet without the knowledge of the user. The security loophole allows the external entities to hack into these systems and use the customer data for nefarious purposes. 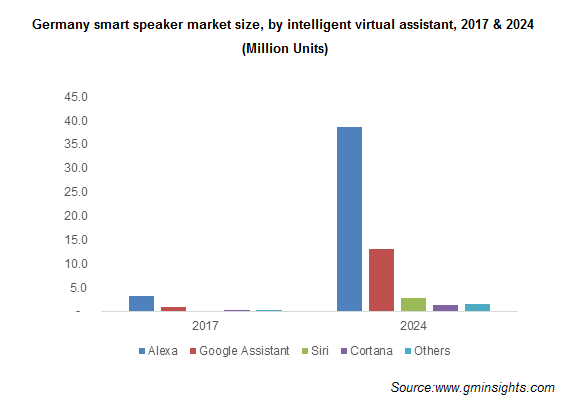 Siri-enabled smart speaker market is poised to witness a significant growth rate of over 35% till 2024 driven by the large established market of Apple and iOS for the smart devices. For instance, in 2017, Siri constituted 48.4% share of voice assistants on smartphones. Furthermore, Siri provides a high quality of virtual surround sound and deep integration technology, which will increase the popularity of these devices among the consumers.

Alexa-enabled smart speaker dominated a market share of around 70% in 2017 owing to its low cost and a large number of benefits such as controlling smart homes appliances, playing games, and playing music. Several companies are developing devices equipped with Alexa that are affordable to a wide range of customers. For instance, companies such as Sonos and Fabriq have launched their devices integrated with Alexa voice assistants.

Personal applications will account for over 90% of revenue share through 2024 led by the increasing usage of the smart home devices. The integration of smart speaker with these devices such as smart lightbulbs, thermostats, and TVs is encouraging the consumers to adopt these devices for personal uses. Devices such as Google Home allow the users to make phone calls and send messages, monitor the user activity, set alarms, and go shopping.

Increasing use of these devices in commercial applications such as banking will drive the market demand. Financial corporations and big banks such as the U.S. Bank, Capital One, and American Express are increasingly using virtual assistants to offer services such as paying bills and checking balances using personal assistants such as Alexa and Siri.

The U.S. smart speaker market is predicted to expand at a CAGR of more than 25% during 2020 to 2024 impelled by the growing penetration of smart homes in the country. The consumers are increasingly demanding technologies that will improve their lives. With more products and services becoming internet-enabled, the number of smart homes is rising to a large extent. Consumer focus on smart homes is increasing rapidly owing to the benefits of these systems including convenience, luxury, safety, entertainment, and energy efficiency. After security, smart entertainment and connectivity have grabbed the highest consumer appeal in the smart homes segment.

Prominent companies in the smart speaker market comprise of Amazon, Apple, Inc., Google, Inc, Sonos, Sony, Onkyo, Fabriq, Harman International, and Lenovo. The industry is characterized by intense competition among the players to develop products with innovative functionalities. These companies are investing in product development on a large scale to cater to the increasingly increasing consumer demand.

The participants in the market are increasingly investing in research & development to improve the functionalities of their devices to combat the increasing competition.

In 2014, Amazon introduced Echo Back, that was introduced with the feature of controlling music with the voice of the user. With this introduction, the company introduced several other features such as cameras and displays to enable the devices with additional features to gain consumer appeal. Following suit, technology companies such as Apple & Google and traditional audio devices companies including Sonos have introduced the intelligent audio devices, thus fueling the market size. Moreover, the industry is offering several opportunities for several entities such as application developers, component suppliers, distributors, network operators, and other vendors to satisfy customer requirements and generate revenue.

This market research report on smart speaker includes an in-depth coverage of the industry with estimates & forecast in terms of revenue in USD and shipment in Units from 2018 to 2024, for the following segments:

The market size of smart speaker estimated to be over USD 4.5 billion in 2017.
The industry share of smart speaker is expected to grow at CAGR of over 20% from 2018 to 2024.
According to the analysts at GMI, the global industry shipments are forecast to reach 500 million units by 2024.
The U.S. market is expected to grow at a CAGR of over 25% during the forecast period due to increasing penetration of smart homes in the country.
Prominent players in the market include Amazon, Apple, Inc., Google, Inc, Sonos, Sony, Onkyo, Fabriq, Harman International, and Lenovo.
Intelligent virtual assistant devices like Siri or Alexa enabled smart speakers are projected to foresee tremendous growth during the estimated time frame owing to the large, well-established marketplace for both Amazon and Apple for smart devices.