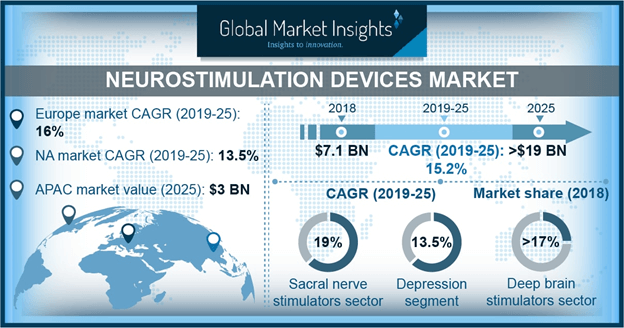 Increasing prevalence of neurological disorders including epilepsy, depression, Alzheimer’s, dementias, Parkinson’s disease, migraine and multiple sclerosis in developed economies is the key driving factor in the neuro stimulation devices business growth. According to World Health Organization, mental health is one of the most common disorder among European population. Thus, surge in number of mental disorders will accelerate the demand for neuromodulators. Moreover, neurostimulation devices deliver electrical stimulation to accurate parts of peripheral nervous system (PNS), spinal cord, and brain to treat various neurological disorders. Several such benefits associated with neurostimulation devices will augment industry growth over the coming years.

Technological innovations such as devices that electrically stimulate nervous system allowing patient management for different types of nerve disorders will foster neuro stimulation devices business growth. Novel technologies developed to restore vision, help in movement after paralysis and recover from traumatic injury will augment the demand for such devices. For instance, researchers use electric stimulation that assist patients with spinal cord injury and regain control of body functions. Additionally, FDA has approved the first visual prosthesis, that has allowed physicians to manage patient health more accurately. Above mentioned aspects will further propel the need for advanced neurostimulators. However, lack of skilled healthcare professionals may impede neurostimulation devices industry growth during the analysis timeframe.

Sacral nerve stimulators segment is estimated to show around 19% CAGR during the forecast timeline. Increasing number of people suffering from incontinence coupled with several efforts by manufacturers for introducing advanced sacral nerve stimulators will prove beneficial for segment growth. Moreover, ability of these devices to stimulates the bowel, sphincter and bladder muscles for normal functioning will increase the adoption of neuro stimulation devices.

Deep brain stimulators segment held over 17% revenue share in 2018 and is expected to rise significantly by 2025. Advantages such as reduced disruption of other brain parts and minimum complications as compared to pallidotomy and thalamotomy will boost segmental growth. Deep brain stimulators facilitate change in brain stimulator injection according to patient’s response to medication and disease progression with an aim to eliminate the need for surgery. Such factors should propel segment growth during the analysis period.

Urinary and fecal incontinence segment accounted for more than USD 750 million in 2018 and is estimated to witness considerable demand over the forthcoming years. Treatment of fecal and urinary incontinence can be achieved by surgically implanted system. This system comprises of sacral nerve stimulation (SNS) that applies minor electrical pulses to sacral nerves and impact the working of bladder. Growing adoption of neurostimulation devices in such treatments will spur the segment size. 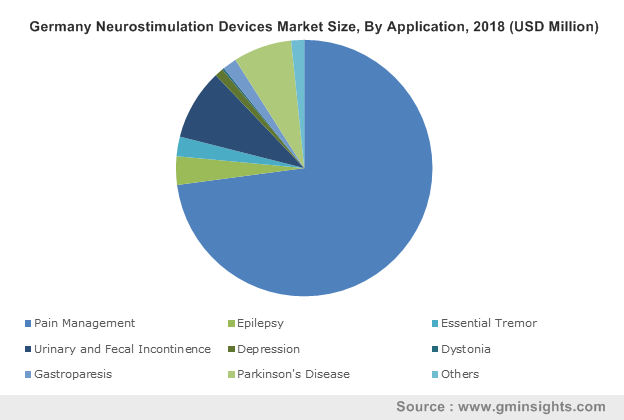 Europe neurostimulation devices market is estimated to witness around 16% CAGR during the forecast timeframe. Growing preference for advanced technologies and innovative treatments should result in escalating use of neurostimulators across the region. Also, presence of established market players focusing on development of technologically driven products will boost the regional business growth. 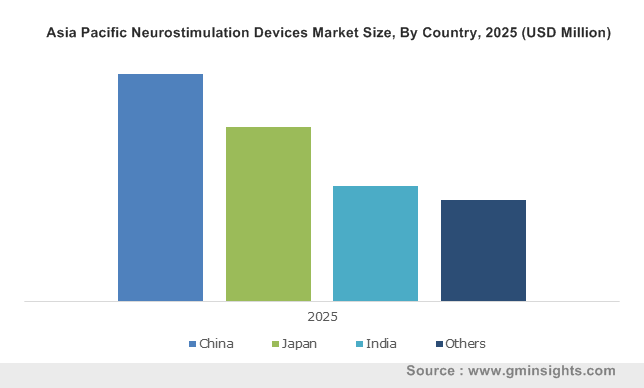 History of neurostimulation devices can be tracked back in 1950s and 1960s, when the first spinal cord stimulation system was introduced for chronic pain treatment. In 1960s, scientists began experimenting with implanted electrodes as a means for restoring hearing loss and first tested the long-term safety and effectiveness of implanting electrodes in the human brain. Later in 1972, first functional cochlear implant prototype, using a single electrode, was implanted into a patient with other advances. Also, several implantable devices for effective patient management were then approved by the FDA. Then in 2000s-2010s, there was a rapid growth in the neurostimulation industry seeking new targets. Advent in technology has led to introduction of novel devices over the last few years. Thus, growing demand for neuro stimulation devices in treatment of various neurological disorders will accelerate industry growth during the forthcoming years.