Neurovascular Devices Market size surpassed USD 3 billion in 2021 and is expected to witness over 5.8% CAGR from 2022 to 2028. Rising prevalence of neurological disorders coupled with a growing demand for effective neurovascular devices are expected to drive the market growth over the forecast period. For instance, according to the World Stroke Organization, nearly 2.7 million people die from ischemic stroke every year, with people under the age of 70 accounting for one-quarter of all deaths. 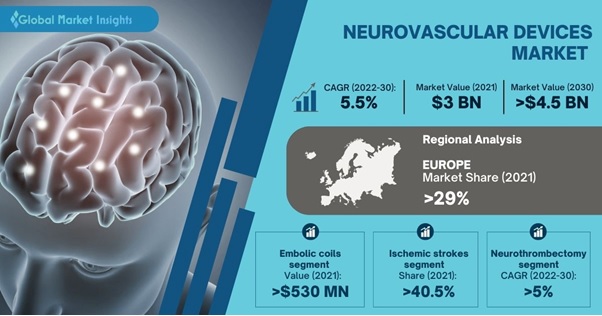 Moreover, growing technological advancement in neurovascular treatments is expected to drive the market statistics. However, high cost of neurovascular devices and lack of skilled professionals are the major restraining factors for the market growth. Additionally, the COVID-19 pandemic has a moderate impact on the market as, amid the pandemic, a vast majority of elective brain surgeries were postponed to free-up limited space for people being treated for the virus. Furthermore, hospital admissions began to fall in March 2020, as hospitals postponed elective admissions and treatments. Also, physicians shifted their focus away from in-person care to telemedicine and many people also put off getting medical help.

Rising incidences of neurological and cerebrovascular diseases such as brain aneurysms and ischemic strokes will render positive impact on the market demand. Additionally, the rapidly growing aging population and large population base suffering from ischemic stroke is another major factor driving the market statistics. For instance, according to the American Association of Neurological Surgeons, approximately 700,000 people suffer from stroke every year, about 500,000 of these are first attacks and 200,000 are victims of repeated attacks. Within five years, almost 25% of individuals who recover from their first stroke will have another. Such a scenario is expected to drive the demand for neurovascular devices in the U.S.

When blood supply to a part of the brain is blocked, an ischemic stroke occurs. The block is usually caused by a blood clot that gets stuck in a narrow blood vessel. This blood clot causes loss of body functions controlled by that area of the brain. Thus, to avoid such situations neurosurgeons use several neurovascular devices such as neurovascular thrombectomy device. This device is useful in eliminating the blood clots accumulated in the neurovascular vessels during an acute ischemic stroke. Such scenarios will propel the market trends. 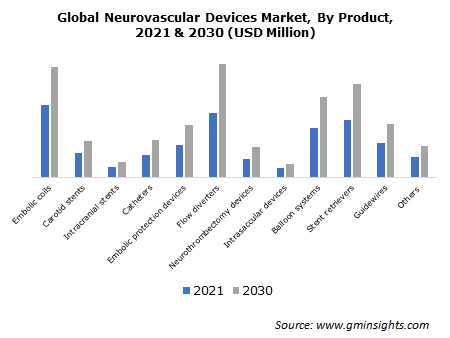 Based on the product, the neurovascular devices market is categorized into embolic protection devices, embolic coils, intracranial stents, intrasaccular devices, catheters, carotid stents, flow diverters, neurothrombectomy devices, balloon systems, stent retrievers, guidewires, and others. Out of these, embolic coils segment accounted for around 17.5% market share in 2021 owing to increasing prevalence of brain aneurysm and ischemic stroke in the developed countries. Additionally, surge in demand for minimally invasive procedures such as coil embolization will further boost demand for embolic coils in the future.

Embolization coils and occlusion devices are also used to successfully eliminate the residual central aorta to pulmonary artery in adults who are at high or prohibitive surgical risk. The embolic coiling is also used to treat a condition called arteriovenous malformation (AVM). An AVM is an abnormal connection between an artery and a vein. It may happen in the brain, spinal cord, or elsewhere in the body. Thus, increasing adoption of embolic coil will be beneficial for the industry expansion. 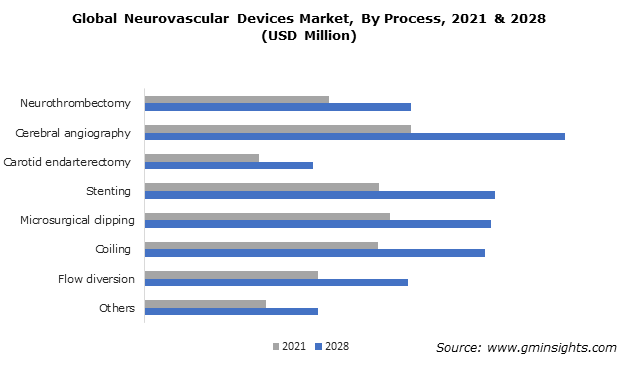 By process, the neurovascular devices market is segmented into stenting, neurothrombectomy, cerebral angiography, microsurgical clipping, carotid endarterectomy, coiling, flow diversion and others. Among them, the neurothrombectomy segment accounted for over USD 355 million in 2021. Neurothrombectomy devices are used to destroy blood clots in the cerebral microvasculature. The neurothrombectomy surgery is the most preferred treatment for acute ischemic stroke because it improves functional results and lowers the death rate. Additionally, increasing number of product launches by the key players will also propel the market growth.

For instance, in 2019, Medtronic announced the launch of the Solitaire X revascularization device. This device is useful in removing the blood clots present in brain. Furthermore, the use of clot retrievers has increased in elderly patients (aged 55 to 65) due to the growing incidence of stroke. Such scenarios will positively promote the market outlook.

Based on therapeutic applications, the neurovascular devices industry is categorized brain aneurysm, stenosis, ischemic strokes, and others. The brain aneurysm segment accounted for over 37.9% market share in 2021. The growth of the segment is attributed to rising cases of brain aneurysm in geriatric population. Other major factors that lead to the development of brain aneurysms include smoking, high blood pressure, and a family history of aneurysms. To treat this medical condition several invasive treatments are available such as flow diverters, and tubular stent-like implants. These neurovascular devices aid in the diversion of blood flow away from the aneurysm sac. The diversion blocks blood flow within the aneurysm, causing the body to repair the wound and encourage arterial rebuilding in the patient. Larger aneurysms that cannot be safely treated with other methods may benefit from flow diverters. Such scenarios will fuel market growth.

North America neurovascular devices market captured around 34.7% market share in 2021 and is poised to grow substantially during the forthcoming years. High regional growth is attributed to increasing prevalence of ischemic strokes along with rising number of surgeries. Moreover, surge in funding for advanced healthcare research, increasing per capita healthcare expenditure and implementation of favorable reimbursement policies will further boost regional market statistics.

Furthermore, the region is witnessing several industry hospital collaborations and the presence of major players operating in this industry leads to easy availability of neurovascular devices. Such aforementioned factors foster the regional industry expansion.

The neurovascular devices report includes an in-depth coverage of the industry with estimates & forecast in terms of revenue in USD from 2017 to 2028, for the following segments: