Choline Bitartrate Market size exceeded USD 410 million in 2021 and is estimated to grow at over 6% CAGR between 2022 and 2028. Choline bitartrate is an active pharmaceutical ingredient formed by the mixture of choline and tartaric acid. Choline is an essential nutrient precursor to acetylcholine. It helps in synthesis of sphingomyelin and phosphatidylcholine which major constitutes of cell membrane. Choline bitartrate plays an important role in lipid transportation, supports cell membrane, healthy metabolism, DNA synthesis and early brain development. 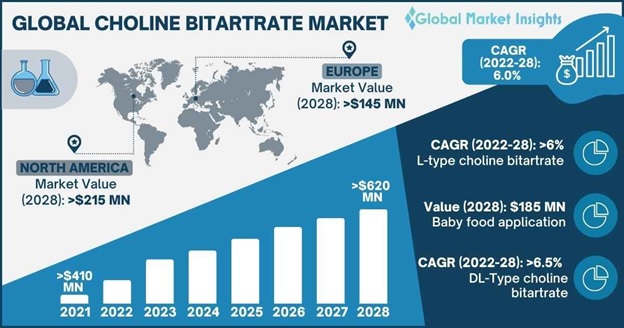 Covid-19 pandemic enforced manufacturing units and factories to shut down temporarily this factor significantly hampered manufacturing operations of the choline bitartrate market. However, as food & beverages, pharmaceuticals, and nutritional supplements were considered as an essential commodity, their production continued during pandemic by taking precautionary measures. This factor caused a demand and supply gap between manufacturers and raw material suppliers which affected the overall market growth.

Various regulations and standard specifications for the quality, labelling, advertisement, and formulation, of choline bitartrate for the usage in food products is anticipated to hinder the market growth at some extend. For instance, EU (EU) No 609/2013 prohibits the use of infant’s pictures for presentations, packaging and advertising of infant formula. It also states that any text or picture should not idealize use of such formula. Advertising and labeling for infant formula should be designed in such a way that it does not discourage breast-feeding. 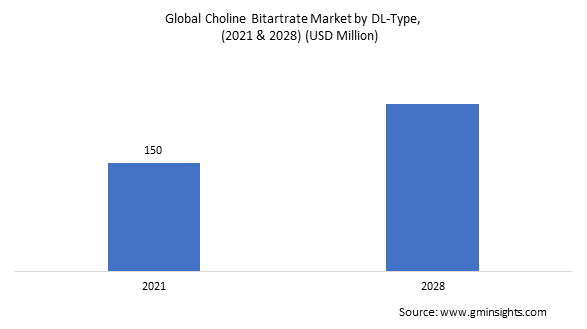 Choline bitartrate ensures proper development of fetus and lowers risk of birth defects; owing to this, doctors often prescribe choline bitartrate-based supplements to pregnant woman. Choline moves fats out from liver and convert it into energy, its usage as an energy boosting supplement is also increasing its demand in sports industry. Intensive physical activities reduce choline levels in the body, which cause fat to build up on muscle and liver cells. To overcome this, athletes are increasingly preferring choline bitartrate supplements, thus propelling market statistics. 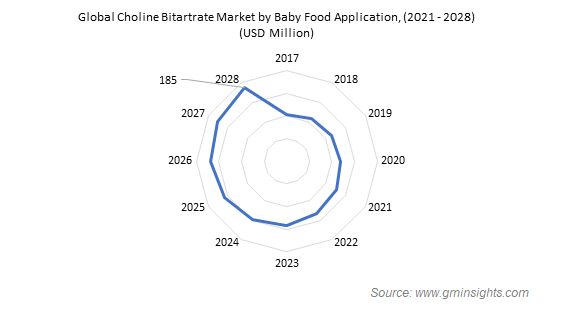 Choline bitartrate is used in manufacturing organic and fortified organic baby foods as they improve visuospatial memory in a child. During initial developments of children millions of cells grow and as choline helps in improving messaging between cell and supporting cell membrane it plays an important role during early child growth. As there are multiple health benefits of choline bitartrate for babies its application in baby food is expected to propel the overall market demand during forecast period. 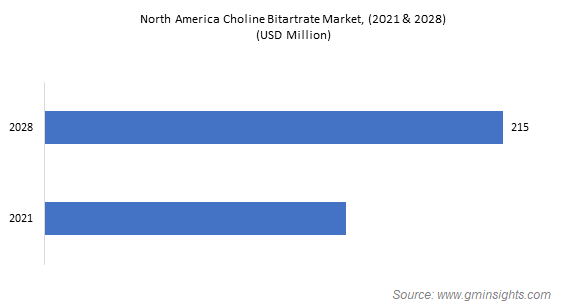 North America choline bitartrate market is anticipated to surpass USD 215 million by 2028. North America is the dominating region owing to the presence of large number of pharmaceutical and nutraceutical companies.

Additionally, due to sedentary lifestyle, high disposable income, ageing population and rising chronic diseases North America is the largest consumer of dietary supplements. More than 75% of US adults take dietary supplement. As North America has well established supplements industry and producer of choline bitartrate itself the products are cost effective and exported to other countries.

Manufacturers are continuously investing in R&D to improve quality and transparency in manufacturing. Key players are also engaged in strategic initiatives such as capacity expansion, merger, and acquisition to expand its foothold in industry and increase its market share in the foreseeable timeframe.

The Global Choline Bitartrate Market research report includes in-depth coverage of the industry with estimates & forecast in terms of volume in kilo tons & revenue in USD million from 2017 to 2028 for the following segments.

The above information has been provided for the following region:

The global choline bitartrate industry size had crossed USD 410 million in 2021 and is poised to record a 6% CAGR between 2022 and 2028 owing to growing adoption in the synthesis of sphingomyelin and phosphatidylcholine.
Choline bitartrate plays an essential role in lipid transportation, supporting cell membrane, healthy metabolism, DNA synthesis as well as early brain development.
The baby food application segment in the choline bitartrate market is pegged to register over USD 185 million by 2028 on account of the thriving need for brain development.
The choline bitartrate market in North America is expected to generate USD 215 million in annual revenue by 2028 due to the robust presence of a large number of pharmaceutical as well as nutraceutical companies.
Customize this Report
Inquiry Before Buying