Wi-Fi Chipset Market size is set to surpass USD 25 billion by 2028, according to a new research report by Global Market Insights Inc.

The increased acceptance & implementation of 5G technology by various major organizations and governments is propelling the market. Several developing countries, such as India, are focusing on creating strategic partnerships with these organizations to deploy 5G infrastructure.

Security concerns and data privacy restrictions will impede the Wi-Fi chipset market growth. The market demand is being hampered by an increase in the number of occurrences of wireless hacking via public hotspots around the world. Additionally, Wi-Fi chipsets and devices will face connectivity challenges due to neighboring channel and co-channel interferences. To address this, several regulatory bodies are working to introduce new security standards for Wi-Fi devices and networks. 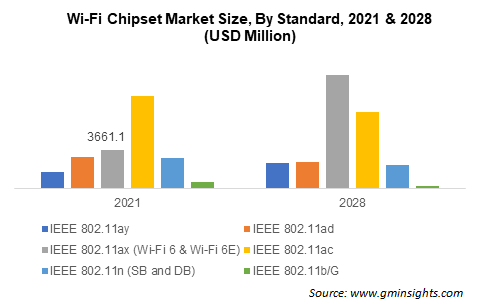 The IEEE 802.11ac standard type held 40% of the market share in 2021. The increased speed and ability of the IEEE 802.11 ac chipsets to provide better coverage across large areas has accelerated its demand for HD video streaming services on desktops and tablets. Several computing solution providers, such as Apple and HPE, are focusing on integrating these chipsets to support the effective wireless networking.

The Wi-Fi chipset market for single-user Multiple-input Multiple-output (SU-MIMO) segment is expected to witness 2% growth rate through 2028 led by its rising adoption in banking and financial institutions. It only transmits data to single device, making it a secure medium of sharing highly confidential data. However, it provides high cybersecurity, high bandwidth speed, and data encryption features, making it ideal for banks and insurance companies. The usage of SU-MIMO in Wi-Fi routers, gateway devices, and transmitters in banks will assist them in providing high data security and network agility, resulting in significant growth opportunities for SU-MIMO applications.

The dual band segment in the Wi-Fi chipset market is predicted to grow at a CAGR of more than 2.5% till 2028 impelled by the several benefits offered such as high flexibility, fast data transmission, provide stability, and reduce the connection issues. The dual band utilizes both, i.e., 2.4 GHz and 5 GHz frequency band unlike single band. The use of dual frequency bands provides enhanced network speed by reducing network traffic. Major players are extensively focusing on developing application-specific product portfolio to gain a competitive edge in the market.

The smartphone segment captured 20% of revenue share in 2021 and is poised to expand at more than 3.5% CAGR by 2028. The market progression is credited to the increasing acceptance of smartphones to access online banking, inline shopping, and other applications. According to the GSMA, Asia Pacific Report 2021, the region's mobile industry contribution to GDP crossed USD 750 billion in 2020 and is slated to reach USD 860 billion by 2025. The increasing usage of advanced technologies, such as 5G, AI, and IoT, in the region has increased the demand for smartphones, fueling the industry value.

The North America Wi-Fi chipset market is estimated to attain a CAGR of over 3.5% during 2022 to 2028. According to a Consumer Technology Association press release, in July 2020, 70% of all U.S. households integrated at least one connected home technology into their home appliances. The rise in the demand for technologically advanced high-end systems in the residential sector, such as security, safety, and intelligent device control, has boosted the use of Wi-Fi technology.

The key players operating in the market include Texas Instruments Incorporated, Intel Corporation, Qualcomm Technologies, Inc., and Realtek Semiconductor Corp. These companies are constantly engaged in new strategies, such as new product launches and acquisitions, in order to expand their product offerings and meet the high demand.