Whiskey Market size is estimated to surpass USD 84 billion by 2025; according to a new research report by Global Market Insights, Inc.

Increasing cross border trade with rapid globalization is anticipated to create new opportunities for manufacturers in whiskey market. For instance, the exports for scotch whiskey grew approximately by 7.8% by value in 2018. Further, manufacturers are focusing on developments of varied products such as barrel aged whiskeys, single malt, organically produced whiskey, and flavored products to gain competitive advantage. 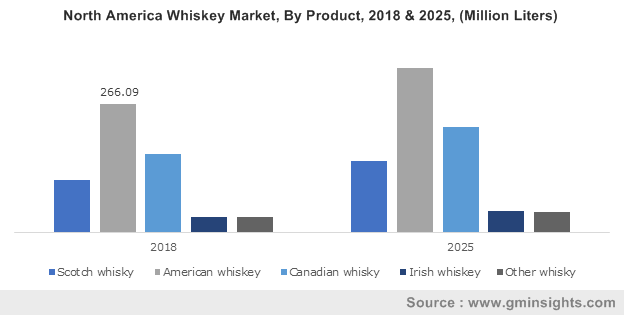 Whiskey is considered as an affordable luxury which drives the market growth for premium and super-premium product offering. Consumers are becoming knowledgeable on different types of whiskeys accompanied by the inclination towards trying new whiskeys with different taste & complexity. Whiskey manufacturing varies as per the production process as well as ingredients used such as malt, wheat, rye, corn, or blends. However, prices of grains are rising due to the scarcity of certain crops which will impact the crop supplies for whiskey production, thus increasing overall production cost.

Scotch whiskey accounts for over 24% of the global whiskey consumption in 2018. Blended whisky holds a dominating share in the global scotch whiskey market. However, single malt whiskey observes high growth rate in terms of volume and revenue.  Value of the single malt scotch is high and allows malt producers to target the growing premium whisky consumer segment. As per scotch whisky association, European Union is one of the largest markets for Scotch whiskey and accounts for about 30% by value and around 36% by volume of the total exports. Also, the United States is the largest imported of Scotch whiskey.

Off-trade distribution holds over 70% share in the overall whiskey market in 2018. Strong growth in travel & tourism industry particularly from emerging economies of Asia Pacific is driving the whiskey sales through off-trade sales channel such as duty-free stores. Also, the demand for super-premium whiskies is high through off-trade sales channels owing to low prices as compared to on-trade sales, and preference for storing premium products for special occasions. Also, the supermarkets, convenience stores, duty-free stores, and auctions offer numerous categories and varieties of the product, thus propelling the business expansion.

Asia Pacific market size is projected to cross USD 37 billion by 2025. India account for around 45% of the global whiskey consumption in 2018. High demand is expected due to increasing count of consumers within legal drinking age, enhanced standard of living, rapid urbanization, and rise in spending on leisure. For instance, Indian population with legal drinking age is projected to increase from 64% in 2011 to 68% in 2021. World’s economy is shifting towards south-east countries, these countries being the emerging market will drive the export growth for the product.