Growing prevalence of chronic pain associated with neurological disorders, cancer, HIV/AIDS, and arthritis will drive the U.S. medical marijuana market. The preference of marijuana over opioid medication is also boosting market revenue in the U.S. as opioids are associated with various side lethal side effects. Therefore, the demand for medical marijuana is continuously on an upsurge in various U.S. states, thereby accelerating market sales. 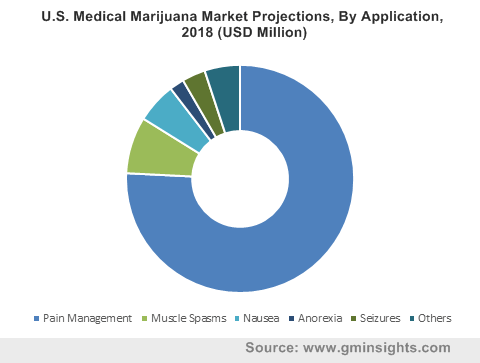 The U.S. medical marijuana pain management market segment is forecasted to grow rapidly at 13.3% CAGR during the forecast period. Growing cases of chronic pain which is the most common cause of long-term disability in the United States will drive the segment growth. In addition, the U.S. population has been using marijuana for pain management as compared to other traditional opioids which have lethal side-effects.

The U.S. topical medical marijuana market segment valued USD 179.3 million in 2017. Increased number of companies are manufacturing lotions and creams that are absorbed through the skin for localized relief of pain and inflammation. Furthermore, topical route of administration is preferred by most of the patients as it results in maximum therapeutic benefits without the cerebral euphoria associated with other delivery methods.

The U.S. medical marijuana dispensaries market segment will expand at a robust 13.3% CAGR over the forecast period owing to presence of number of legal dispensaries operating in a most of the states. With each state legalizing marijuana for medical purposes, more and more dispensaries are being set up in the country, hence propelling the market growth of the segment.

New Hampshire medical marijuana market is forecasted to expand at 24.1% CAGR during the forecast period. New Hampshire ranked second in the country for the highest opioid overdose rate. With the legalization of medical marijuana, it will result in improvement of health outcomes for individuals suffering from pain, thereby driving the segment growth in the long run.

U.S. medical marijuana market research report includes in-depth coverage of the industry with estimates & forecast in terms of revenue in USD million from 2013 to 2024, for the following segments:

The above information is provided for the following U.S. regions and states: