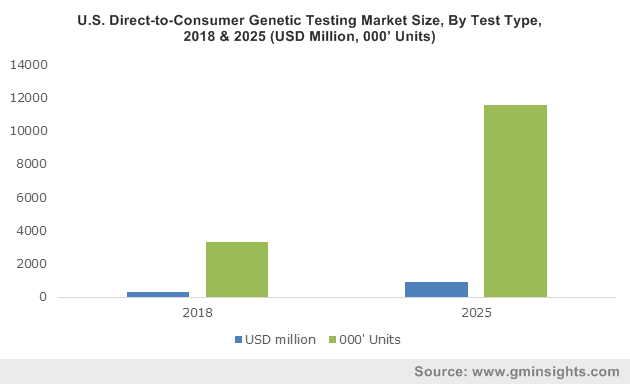 Predictive testing segment of U.S. direct-to-consumer genetic testing market was valued around USD 50 million in 2018 owing to advent of technologically upgraded platforms to perform genome analysis. Predicative testing is a type of presymptomatic testing that enables chances of acquiring the disease before onset of symptoms. This allows effective management of the condition. These factors should propel the predictive testing segment growth in years to come.

U.S. Direct-To-Consumer Genetic Testing market research report includes in-depth coverage of the industry with estimates & forecast in terms of revenue in USD million from 2014 to 2025, for the following segments:

U.S. Direct-to-Consumer Genetic Testing market
Call Us  Request Free Sample
Top
Chat with us
We use cookies to enhance your experience. By continuing to visit this site you agree to our use of cookies. More info X