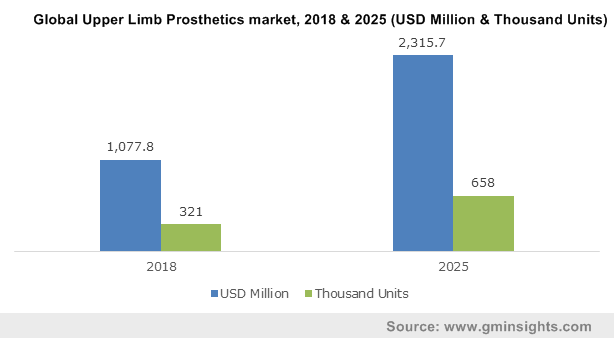 Terminal devices segment is anticipated to witness 11.8% CAGR over the estimation period from 2019 to 2025. Cost-effectiveness and practicality associated with terminal devices will boost the market growth. These devices are activity specific and require low maintenance will lead to high adoption of these devices in the foreseeable future.

Prosthetic clinics accounted for the largest market share in the global upper limb prosthetics market by end-use. Availability of skilled professionals, focused attention towards patients and high footfall of patients are the factors attributing to high segmental share. Rising preference towards ambulatory surgical centers will propel the segmental growth over the coming years especially in developed economies.

The largest share by cause in the global upper limb prosthetics market is of vascular disease and diabetes. The high risk of amputations among vascular disease and diabetic patients will contribute to segmental share. Cancer is the fastest growing segment by cause in the global market due to rising cancer cases all over the globe. For instance, in 2018, nearly 9.6 million deaths occurred due to cancer in the world.

The U.S. held largest regional share of global upper limb prosthetics market in 2018. The vast number of trained professionals, presence of major market players, high level of awareness among citizens about prosthesis, high technological adoption and presence of well-developed healthcare infrastructure will drive the U.S. market. Also, high investment made by the U.S. government in healthcare R&D will further support the growth of the market.

Upper limb prosthetics market research report includes in-depth coverage of the industry with estimates & forecast in terms of revenue in USD million and units from 2014 to 2025, for the following segments:

Call Us  Request Free Sample
Top
Chat with us
We use cookies to enhance your experience. By continuing to visit this site you agree to our use of cookies. More info X