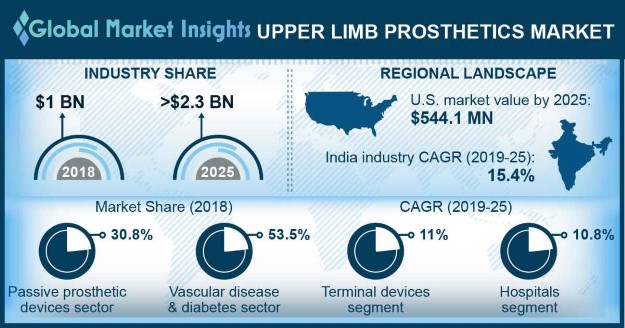 A man-made device that is used to replace missing limb, that may have undergone amputation due to trauma or disease is called as prosthetic implant. Prosthetics is the field concerned with making and fitting such type of implants. The aim of prosthetics is to restore the normal functions of the missing body part. Upper limb prosthetics include prosthetic wrist, prosthetic elbow, prosthetic shoulder, prosthetic arm and terminal devices.

Growing number of accidental injuries and trauma is resulting in higher cases of amputations, that will drive the upper limb prosthetics market growth during the forecast period. For instance, every year more than one million annual limb amputations occur all over the globe. Majority of these amputations are upper limb. Rising prevalence of diabetes also act as a major factor for driving the growth of global market. According to the International Diabetes Federation (IDF), the global prevalence of diabetes is expected to reach 435 million by 2030. Such factors will augment the growth of the market over the forecast period. 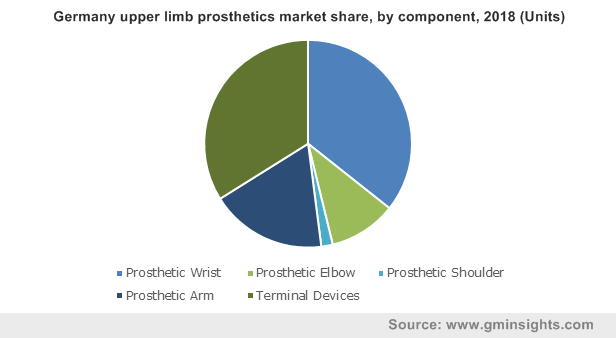 Upper Limb Prosthetics Market, By Cause

Vascular disease and diabetes segment contributed for the largest share of 53.5% in 2018. According to healthcare professionals, people suffering from diabetes mellitus or peripheral artery disease are under high risk for amputations. Healing process of body is also low in such patients. Due to such factors, vascular disease and diabetes segment will continue to contribute for the largest share in the global upper limb prosthetics market over the forecast period.

Cancer segment is expected to show lucrative growth over the forecast period. Surgery involving amputation is needed, if the cancer has spread on bone and into the nearby blood vessels. Cancer cases have reached 18.1 million in 2018 and around 9.6 million deaths have occurred due to the same. Aforementioned factors will drive the growth of cancer segment over the estimation period.

Hospitals held significant industry share in 2018 and is forecasted to expand at a healthy CAGR of 10.8% over the forecast period. This growth is attributed to the high budget of hospitals. Ambulatory surgical centers will grow at a promising CAGR as they are preferred in developed economies. 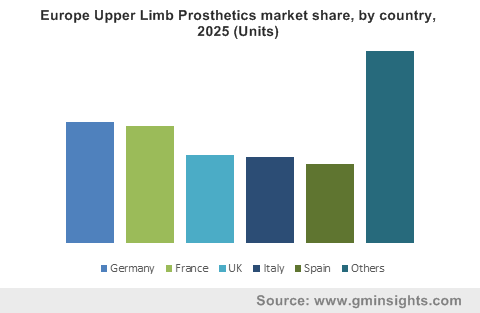 The U.S. upper limb prosthetics market is forecasted to reach 158,641 units with a value of USD 544.1 million by 2025. The country dominated the global market in 2018 due to high level of awareness among citizens for prosthesis, high adoption for advanced technology, vast number of trained professionals, the presence of dominant market players and presence of highly developed healthcare infrastructure. Also, the high spending on R&D related to advanced prosthesis in the U.S. will drive the market growth.

The upper limb prosthetics market of India is expected to grow at a lucrative growth of 15.4% over the forecast period due to low price of prosthetic implants in the country, increased government initiatives to support amputees, growing ageing population along with increasing developments in healthcare technologies. The above-mentioned factors will boost the demand for upper limb prosthetics over the forecast period.

The upper limb prosthetics has come a long way starting from its primitive beginnings to technologically advanced and sophisticated prosthetics of current times.  Today, the upper prosthetic implants are made up of aluminium, plastic as well as advanced composite materials. The aim is to provide light weight as well as strong implant to amputees. Apart from being lighter and stronger, these devices also offer functionality through advanced robotics. The advanced implants offer basic movements to mimic the natural functions. Silicone covers are also available to provide natural appearance to the upper limb prosthetics. These advancements will propel the market growth of global upper limb prosthetics over the forecast period.