Test Strips Market size is set to exceed USD 11 billion by 2025; according to a new research report by Global Market Insights Inc.

Rising prevalence of chronic diseases such as diabetes and kidney disorders will significantly augment test strips market growth, across the forecast timeframe. For instance, as per the International Diabetes Federation (IDF), in 2017, there were more than 114 million cases of diabetes in China and this is expected to grow more over the forthcoming years. Increasing adoption of sedentary lifestyle among the population, rising habit of alcohol intake in developed as well as developing economies are major reasons fueling diabetes prevalence, thus propelling business growth. 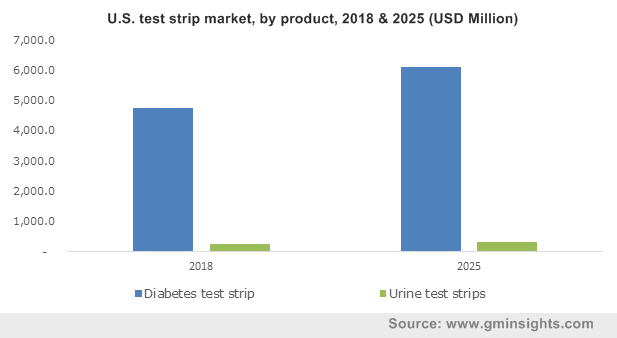 However, dearth of reimbursement policies for test strips in several developed as well as emerging economies is a major growth hindering factor. Also, lack of accuracy in tests conducted with test strips is another chief growth impeding factor.

Diabetes test strips segment held the largest revenue share, accounting for a total value of USD 8.1 billion in 2018 and is estimated to show considerable growth throughout the analysis timeframe. High growth is attributable to increasing prevalence of diabetes across the globe. As per the IDF, China, India and U.S. consists of the highest number of people suffering from diabetes. People with diabetes are mostly prescribed for regular testing, thus boosting product demand. Rising awareness among the population about the ill effects of undiagnosed diabetes will significantly contribute to business growth.

Home care as an end-use segment is estimated to hold market share of about 50.5 % in 2018 owing to rising preference of people for point of care testing. Diabetic population follows a particular treatment regimen, that might demand multiple tests in a day. Hence, it is more convenient for the population to adopt point for care testing products for regular checkups, thus boosting segmental growth.

Germany test strips market is estimated to exceed USD 470.0 million by 2025. Germany is recognized as one of the highly populated countries with diabetes. Prevalence rate of diabetes is expected to grow more in the forth coming years, owing to increasing adoption of sedentary lifestyle, thus fostering the market growth. Additionally, affordable cost of diabetes test strips coupled with growing number of firms operating in the market are few of the major factors influencing test strips business growth.

Indian test strips market share is estimated to expand at 5.7% CAGR during the analysis period. Existence of a vast patient population in India and rising incidence of diabetes among the geriatric population will propel the market growth. Additionally, growing awareness among the population about various diagnostic tests coupled with rising acceptance of technologically advanced treatments will further augment Indian market growth over the projected timeframe.

Some of the prominent players operating in the global test strips industry are B. Braun Melsungen AG, Abbott Laboratories, Ascensia Diabetes Care Holdings Ag, Taidoc Technology Corporation, among others. Key strategies adopted by these industry players include mergers & acquisitions, innovative product launches, partnerships, and strategic collaborations with other participants to expand their business product portfolio and gain a competitive edge over other enterprises operating in the market. The advances in test strips are growing and are under development. For instance, the advanced test strips offer the user with the ability to reapply blood when the test strip is underfilled and provide more accurate and reliable test results.

Test Strips market research report includes in-depth coverage of the industry with estimates & forecast in terms of revenue in USD million from 2014 to 2025, for the following segments: