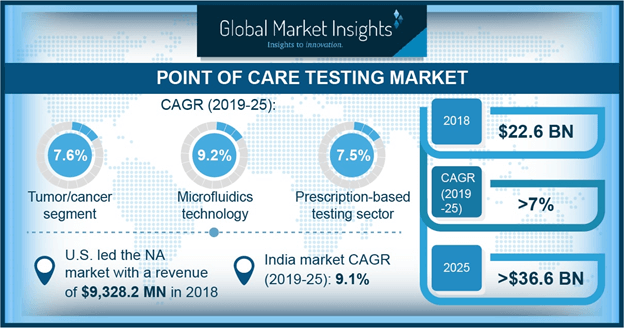 Rising incidence of infectious diseases and chronic conditions such as cardiovascular diseases and diabetes in developing countries such as India and China has stimulated demand for point of care molecular diagnostic services. There were around 80,000 new incidence and nearly 62,000 deaths due to HIV infection in India in the year 2016. Diabetes is one of the major factors driving the market growth. Around 422 million people in 2014 were detected with diabetes globally that has boosted the demand for glucose biosensors, fueling the point of care testing market growth.

Growing awareness about early disease diagnosis and prevention has stimulated the demand of point of care molecular diagnostics for detection of cancer and infectious disease at early stages. It has also benefitted genetic testing and detection of sexually transmitted diseases. Point of care tests have become an integral part of disease management and therapy. Applications include drug regimen selection, patient stratification, therapeutic monitoring, and detection of predisposition to disease.

High cost of product development will be a major market hindering factor. Integration of advanced technology into these devices to reduce the rate of errors have increased the cost of production which has in-turn led to an increase in the price of these devices, thereby restricting the overall market growth. 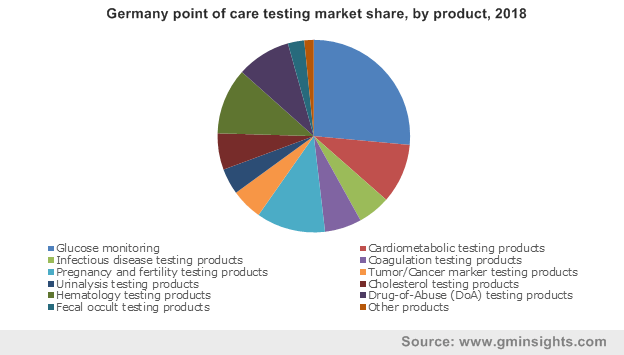 Glucose monitoring devices market held majority of market share in the year 2018 and was valued around USD 5,683.6 million. Increasing prevalence of diabetes in developed as well as developed economies is the major driver that will drive segmental growth over the forecast timeframe. As per the International Diabetes Federation (IDF) Diabetes Atlas, over 415 million people aged between 20-79 years had diabetes in 2015 globally. This number is estimated to reach 642 million by 2040. In 2015, diabetes accounted for more than 5 million deaths across the world. Hence, growing diabetes prevalence will enhance the point of care testing market in the near future.

Tumor/cancer marker testing products market is estimated to grow at 7.6% in the foreseeable future. Cancer or tumor markers are substances that are produced as response to cancer or non-cancerous conditions by cancerous or other body cells. Most tumor markers are produced by normal and cancer cells; however, they are made at relatively greater levels in cancer conditions. As per the recent publication by the American Cancer Society, there were estimated 1.7 million new cancer cases diagnosed and 600,000 cancer deaths in the U.S. in 2018. Hence, increasing number of people affected with cancer will result in augmenting the growth of point of care testing market.

Biosensors technology market was valued around USD 6,864.4 million in the year 2018 and is estimated to grow considerable rate over the forecast period. Several developments and advancements, growing acceptance of rapid diagnostics, rise in applications of biosensors in the field of medical science and increasing diabetic population will drive the segmental growth during the forecast period. Hence, growing preference and demand for rapid diagnosis will boost the point of care testing industry growth.

Microfluidics technology market is projected to expand at a robust CAGR of 9.2% over the forecast period. Several advantages of microfluidics including accuracy in controlling rate of flow of samples and reagents along with precise control in quantities will spur the market growth. The controlled rate of flow of samples assists in detection and separation of analytes with improved sensitivity and accuracy. Hence, growing applications of microfluidics technology will spur the business growth.

OTC testing market held market share of over 55% and was valued at USD 13,286.1 million in the year 2018. Point of care diagnostics consists of several approved tests that are conducted near patient at home (self-tests/OTC tests) or other medical settings. OTC tests do not require dedicated space as clinical laboratory, and even their turn around time is quick. Robust growth of home healthcare sector coupled with growing demand and adoption of self-tests especially in case of blood glucose monitoring should drive segment growth over the forecast period.

Prescription-based testing market is estimated to grow lucratively at 7.5% during the projection period. There has been increase in the usage of prescription-based testing. For instance, in Denmark, general practitioners account for over 80% of total antibiotic use. To decrease unnecessary and ineffective antibiotic consumption, the Danish National Board of Health issued guideline in 2012 encouraging rational antibiotic prescribing (i.e. utilization of narrow spectrum antibiotics), only based on microbiological and clinical examination. Hence, aforementioned reasons will have significant impact on point of care testing market growth.

The application of point of care testing devices in blood glucose testing held the majority of market share and was valued at around USD 9,551.7 million in the year 2018. Increase in diabetes prevalence across the globe, especially in the developing and under-developed countries will augment the business growth. Prevalence of diabetes has increased multi-fold since the last few years. As per the World Health Organization (WHO), over 400 million people across the globe had diabetes in the year 2014. Hence, increase in number of people suffering from diabetes will result in growing use and application of blood glucose testing products, thereby enhancing the growth of point of care testing market in the near future.

Use of point of care testing devices in hospitals was high in the year 2018 and amounted up to USD  8,087.0 million. Hospitals segment is estimated to experience high growth over the forecast timeframe owing to increase in number of hospital admissions. Increase in prevalence of chronic conditions such as cancer and cardiovascular diseases that require proper monitoring and prefer minimally invasive procedures are carried out in hospitals and clinics. Hospitals is preferred more as compared to the other healthcare facilities and hence the market growth is estimated to be high in this segment. Hence, growing hospital admissions and state-of-art facilities will boost the point of care testing market growth in hospitals.

Use of point of care testing devices in diagnostic centers is estimated to expand at a CAGR of 7.2% during the projection period. According to the Centers for Disease Control and Prevention (CDC), more than 60 million adults in India are suffering from diabetes, out of which more than 30 million are undiagnosed or untreated, resulting in increased risk of developing complications and premature mortality. Availability of cost-effective and user-friendly alternatives for disease management will stimulate the segmental growth over the forecast timeframe. 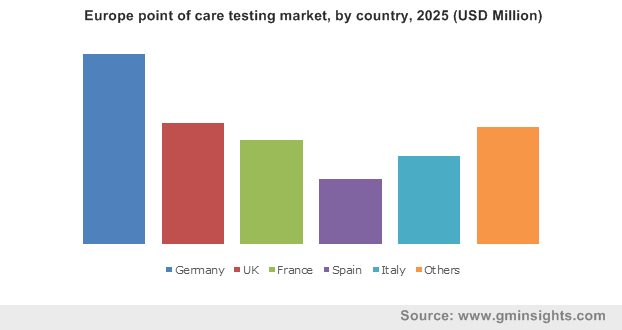 U.S. dominated the North America point of care testing market in the year 2018 and was valued around USD  9,328.2 million. Growing demand for rapid and portable diagnostics tests, current technological advancements of molecular methods for developing of fast, inexpensive and simple to use tests will be highly influential factors for industry growth. Hence, above mentioned factors will play significant role in augmenting the point of care testing market in the country.

Some of the notable point of care testing market participants include Abbott, F. Hoffmann-La Roche Ltd., Johnson and Johnson, Siemens AG, and Abaxis, among others. These key industry players have undertaken certain strategic decisions that have helped them to sustain tough competition in the market. Companies focus on adding improvisations in the point of care testing industry that enhance the performance and hence will increase the demand of such products. Increased demand will also lead to rendering profits for the global point of care testing product manufacturing companies.