System on Module (SoM) Market size is set to exceed USD 2.5 billion by 2026, according to a new research report by Global Market Insights, Inc.

The market is gaining traction due to the proliferation of smart factories across the globe. These smart factories are equipped with advanced automated equipment, such as Human-Machine Interface (HMI), Programmable Logic Controllers (PLC), industrial robots. The system on module offers several intuitive features, such as high-performance, smaller footprint, & high energy efficiency, compared to traditional modules, increasing its demand in automation equipment and smart factories. The proliferation of IoT and AI technologies in smart factories will further boost the adoption of SoM in the coming years.

The increasing uptake of wearable healthcare devices across developed economies is fueling the System on Module market. According to the January 2020 report generated by Pew Research Center, 21% of U.S. adults regularly wear fit bits or smart watches for continuous health monitoring applications. The system on modules offer high-end features such as small size, high performance, and seamless connectivity suitable for wearable healthcare devices. To address the growing demand for wearable devices, market players are focusing on developing application-specific modules.

Design-related complexities associated with micro system on module are restraining the market growth. These modules have a low life cycle compared to traditional modules and are difficult to modify once they are fabricated. In addition, the micro system on module requires advanced packaging and high-scale integration, which further increases the overall cost of production. However, market players use low-cost ARM-based architecture, which will overcome the design complexity. 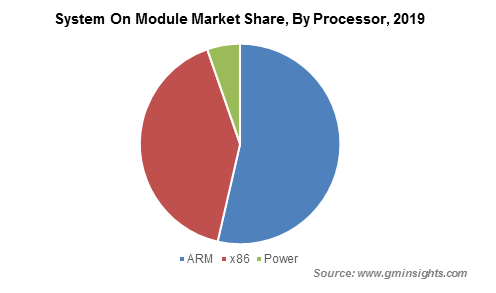 The x86 architecture segment dominated a market share of 40% and is anticipated to grow at a CAGR of around 7% through 2026. The growth is driven by its higher execution and processing capabilities compared to ARM-based processors, accelerating the adoption of x86 processors in various boards and modules. The x86 processors are based on Complex Instruction Set Architecture (CISA) that allows System on Modules to perform multiple activities with a single set of instructions. This reduces execution time and higher deliverables, accelerating its adoption across the automotive and industrial markets.

Intel Corporation designs x86 architecture, which is widely used in the current SoM products. Intel also provides a license to various market players to develop their processors. Some of the leading manufacturers of x86-based modules are Axiomtek, Adlink, SECO, and Thundercomm. These players are continuously involved in the development of new system on modules based on the x86 architecture to gain high growth opportunities in the market.

The Qseven segment accounted for 35% market share in 2019 and will expand at over 10% CAGR during the forecast timeline attributed to the increasing adoption of Qseven standard in the fabrication of micro and nano SoM devices. This standard allows a smaller form factor of about 70mm x 40mm and high-performance, which is suitable for space confined solutions. Qseven modules are highly preferred by embedded system engineers as they support both x86 and ARM platforms. Companies are continuously involved in the development of new system on modules with Qseven standard to gain high competitiveness in the industry.

The transportation sector held more than 5% market share in 2019. Rising development initiatives in connected vehicles technology and self-driving cars are expected to amplify the adoption of system on module devices in the market. These modules are integrated into telematics, instrument clusters, and Vehicle-to-Vehicle (V2V) communication systems for advanced vehicle safety applications. In addition, the surging demand for smart traffic management in the transportation sector will further spur the market growth.

Proliferation of smart home devices in the U.S. will boost the adoption of system on modules in North America

The North America SoM market accounted for 25% revenue share in 2019 and is estimated to observe 8.5% growth rate from 2020 to 2026 impelled by the burgeoning rates of smart home connected devices in the U.S. According to the January 2020 press release by the Consumer Technology Association, around 69% of the total U.S. households have at least one smart home technology product. Smart home connected devices, such as service robots, smart speakers, smart security systems, and indoor HVAC control systems, are integrated with SoM devices.

In addition, the rising penetration of IoT technology in North America will further accelerate the market size expansion. According to the GSM Association, North America accounted for 2.8 billion IoT connections in 2019, which is projected to surpass the 5.4 billion mark by 2025. Surging IoT-based devices in the region will further amplify the adoption of system on modules.