Private LTE Market size is set to surpass USD 13 billion by 2026, according to a new research report by Global Market Insights, Inc.

The private LTE market growth is attributed to the growing deployment of private LTE networks in public safety agencies. In today’s industrial and business-critical domains, the private LTE technology enables users to integrate several machines, people, and other devices into a wide range of applications. These systems make it possible for operators to deploy high-speed networks without being dependent on licensed mobile operators. The LTE network empowers them to run their own local networks with a dedicated equipment and setting.

The market is facing severe challenges amid the ongoing COVID-19 outbreak due to its negative impact on consumer demand for smartphones. 5G deployment networks have witnessed a delay in most of the regions, adversely affecting the market expansion.

With the growth of smart cities, there has been a tremendous increase in the number of connected devices and sensors that utilize communication technologies to enable interaction between the smart city objects. In addition, the smart city applications are slated to drive the demand for next-generation networks, such as LTE, LTE-A, and Bluetooth, to support the high transmission rates, supplementing the market progression. 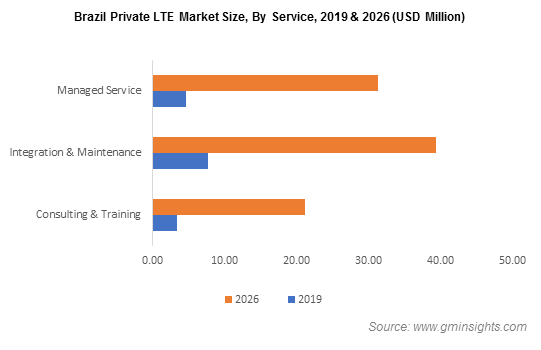 The eNodeB segment in the private LTE market is anticipated to showcase 20% growth rate through 2026. The growing deployment of Distributed Antenna Systems in shopping malls, stadiums, and outdoor arenas to support the demand for high bandwidth enables mobile operators to embrace eNodeB LTE small cell base stations. The LTE eNodeB maximizes the use of ultra-wide bandwidth of LTE networks to enable high-speed connections that provide end-users with mobile data services such as video-on-demand and high-simulation video conferencing.

The energy segment is projected to grow at a CAGR of 25% by 2026. The growing volumes of distributed energy flow in many regions worldwide have resulted in the requirement of a dynamic infrastructure for handling unpredictable and bidirectional power flows. New consumption patterns and the evolving trend of electric vehicles also contribute to the market demand as these systems require a robust, highly secured, and reliable communication network.

Asia Pacific private LTE market is predicted to expand at a CAGR of 20% through 2026 owing to the growth of the IoT market. The adoption of IoT platforms in various industry verticals, such as transportation, mining, healthcare, and manufacturing, is poised to drive the demand for secure & private IoT networks, enabling enterprises to have a control over their networks with improved security.