Home > Pressrelease > Prenatal and New-born Genetic Testing Market worth over $9.5bn by 2027

Prenatal and New-born Genetic Testing Market size is set to surpass USD 9.5 billion by 2027, according to a new research report by Global Market Insights Inc.

Growing rate of traditional consanguineous marriages that fuels the risk of autosomal recessive disorders in the newborn is amongst the key factors boosting the prenatal and new-born genetic testing market progression. Marrying in closely related family members is tradition in several countries in Middle East, West Asia, East Asia and North Africa region with almost half of the marriages being consanguineous. The emigrant from these regions continue the tradition and are contributing to the surging rates of genetic disorders.

Consanguineous marriage results in transfer of two recessive defective mechanisms from the parents and the offspring may inherit these genes causing the congenital anomalies. Around 1 billion people reside in the countries that commonly practice marriage among relatives. Amongst them, 1 out of 3 individuals are married to a second cousin or closely related family member. The risk of having genetic defects or chromosomal abnormalities among offspring of such marriages is almost two-fold.

Higher effectivity, accuracy and advent of FISH technology is poised to spur the genetic testing demand 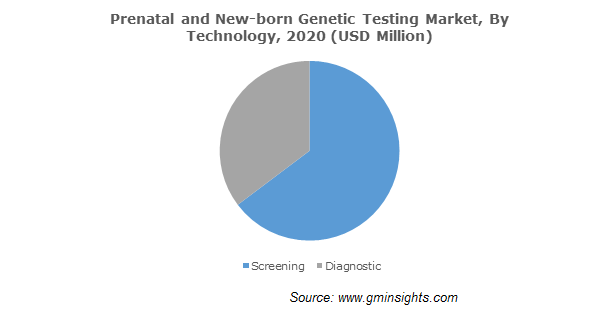 The diagnostic segment accounted for more than 35% of the prenatal and new-born genetic testing market share in 2020 led by the high accuracy and increasing utilization of prenatal diagnostic testing. Some diagnostic tests offer 99.9% precision in assessing the presence chromosomal abnormality in a baby. The emergence of fluorescence in situ hybridization (FISH) has been one of the cornerstones, promoting the use of diagnostic genetic testing amongst the infant population. Recent developments in novel approach have reduced the turnaround time for getting results and increased the accuracy in prenatal diagnosis, further reducing the occurrence of false-positive results.

Rising preference for diagnostic centers will drive the market revenue

The diagnostic centers segment in the prenatal and new-born genetic testing market is anticipated to expand at 11.3% growth rate through 2027 owing to the adoption of advanced prenatal and new-born genetic testing technologies and rapid clinical outcomes. The preference for diagnostic centers is increasing attributed to the high utilization of novel diagnostic tools offering accurate, quick and cost-effective clinical outcomes. Moreover, the growing number of diagnostic laboratories would further promote the segment growth.

China held a significant revenue share in the Asia Pacific prenatal and new-born genetic testing market and is slated to expand at 15.1% CAGR by 2027 on account of the increasing prevalence of genetic conditions, rising occurrence of chromosomal malformations among the newborns and favorable government initiatives supporting prenatal and new-born genetic testing. The highly prevalent genetic conditions observed in the country are congenital hypothyroidism (CH), phenylketonuria (PKU), thalassemia and glucose-6-phosphate dehydrogenase (G6PD) deficiency among others. Approximately 5.6% of the infants in the country are born with defects and the rate has increased over the time significantly.

Additionally, as per the estimates, around 26,000 new cases of Down’s syndrome are added on an annual basis with incidence of Down’s syndrome accounting for 1 out of 700 births. The government initiatives in place favor the prenatal and new-born genetic testing across the country. Three surveillance programs are initiated by the government for detecting birth defects: National Statistic of Health, National Birth Registry and National birth defect registry. The Chinese government also mandates screening for phenylketonuria and congenital hypothyroidism among the infants under newborn screening program.

Some of the major participants operating in the prenatal and new-born genetic testing market are Ariosa Diagnostics (Roche), Berry Genomics, BGI, Biorad, Illumina, Laboratory Corporation of America, Natera, Qiagen, Sequenom, Trivitron Healthcare and Verinata Health among others. These companies are engaged in strategic collaborations, partnerships and agreements to gain competitive advantage over their competitors.