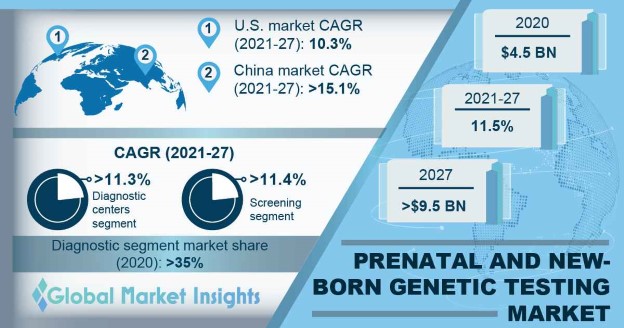 Growing prevalence of genetic disorders including Edward syndrome, Down’s syndrome, Patau syndrome, and others in new-born is the major factor driving the prenatal and new-born genetic testing market growth. Increasing demand for detecting genetic abnormalities in the prenatal and newborn population is also contributing to the market expansion. Additionally, heavy investment in research activities, extensive research associated with proteomics and genomics have led to significant developments in technology.

Prenatal genetic testing refers to tests carried out during pregnancy to determine the possibility of genetic condition or birth defect in the fetus. It is carried to check the presence of genetic disorders such as Tay-Sachs disease, cystic fibrosis, sickle cell anaemia and Down’s syndrome among others. Screening is further continued after a baby is born, called newborn genetic testing to check for genetically inherited diseases or congenital anomalies such as phenylketonuria (PKU), muscular spinal atrophy, critical congenital heart disease, hearing loss, and others. Prenatal and new-born genetic testing is significant in determination of various options during pregnancy to improvise the health outlook for the baby. Prenatal and newborn screening helps in prevention of infant mortalities and enhances patient outcomes.

The Centers for Medicare and Medicaid Services (CMS) and the Food and Drug Administration (FDA) regulates prenatal and new-born genetic testing. The U.S. FDA mandates establishing efficacy, safety and security of biological products to ensure high quality offerings. As per the U.S. FDA, genetic testing is a special type of medical device and hence, falls under the FDA's regulatory purview. Recently, the FDA applied enforcement discretion to majority of the genetic tests but in the current regulatory scenario, the FDA regulates the test on the basis of its positioning. These test kit makers require approval from the FDA before commercializing the product. The stringent regulatory framework may refrain the prenatal and new-born genetic testing market share.

The COVID-19 pandemic has rendered minimal impact on the prenatal and new-born genetic testing market. The coronavirus outbreak has affected millions of people across the world and caused significant mortalities. In order to prevent the further transmission of SARS-CoV-2, lockdowns were imposed, and emergencies had been declared in majority of the countries. The shutdown of major sectors of the economy distorted the supply chain and restricted the movement of raw materials, further limiting the industry expansion.

The prevalence of genetic diseases and chromosomal abnormalities has increased rapidly across the globe in the last few years. Around 350 million people suffer from some of the other genetic and rare diseases across the globe. According to the World Health Organization (WHO), genetic disorders and chromosomal abnormalities are reported in approximately 2 to 5% of live births. These disorders are responsible for around 30% of pediatric hospital visits and account for 50% of pediatric deaths in developed economies. Increasing prevalence of these disorders would increase the target population for market, thereby presenting the industry progression.

Genetic and congenital conditions increase the disease burden and cause significant mortalities among prenatal and newborn babies. Chromosomal abnormalities are referred to as one of the leading factors responsible for infant mortality in the UAE, Bahrain, Oman, Kuwait and Qatar. Several studies conducted in Saudi Arabia infer that majority of prenatal mortalities were caused due to congenital malformations. Moreover, genetic and chromosomal ailments account for several disabilities such as mental handicap, blindness and deafness. Similarly, in India, genetic diseases and chromosomal abnormality occurs among 25-60 per 1,000 births and is one of the leading factors for child mortality. Genetic factors also augment the incidence of multifactorial disorders and are responsible for progressively rising inherited cardiovascular ailments in many countries. Growing prevalence of chromosomal abnormalities, associated conditions and genetic disorders will intensify the prenatal and new-born genetic testing market size during the forecast timeframe.

The screening segment in the prenatal and new-born genetic testing market is projected to expand at an 11.4% growth rate through 2027 led by technological advancements, surge in use of screening during pregnancy and growing awareness regarding birth defects. Screening tests are used in determination of inherited, congenital birth defects and performed during & after pregnancy. Pregnancy after 35 years of age increases the risk of giving birth to a baby with chromosomal defects and the risk increases with growing age. Upsurge in geriatric pregnancy will further foster the demand for acceptance of screening genetic tests. Technological advancements in the genetic screening tests such as the non-invasive prenatal testing (NIPT) would further channelize the industry size.

The Down’s syndrome segment accounted for around 41% of the market share in 2020 and is estimated to attain a CAGR of 11.4% by 2027 owing to growing number of infants suffering from Down’s syndrome. The Down’s syndrome represents one of the most prevalent chromosomal anomalies related to multiple congenital defects and leads to mental retardation & even severe health-related complication and defects. According to the World Health Organization, Down’s syndrome condition is observed in 1 out of 1,000 to 1,100 live births, globally. Similarly, in India, the condition is reported in every 1 child per 850- 900 live births. In addition, as per the Centers for Diseases Control and Prevention (CDC), the prevalence of this condition over the recent years has increased by around 30%. The rising prevalence of Down’s syndrome and number of paediatrics suffering from the condition will increase the use of prenatal and new-born genetic testing, thereby facilitating the industry revenue. 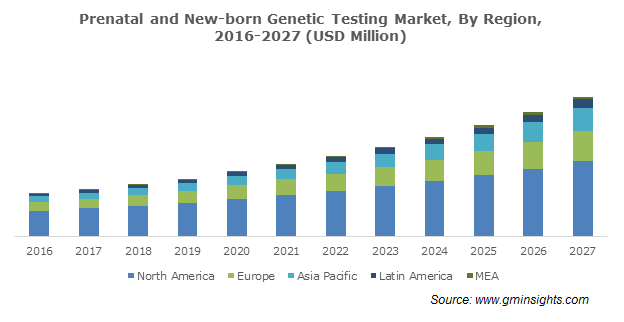 U.S. dominated the North America prenatal and new-born genetic testing market in 2020 and is poised to register growth of over 10.3% during 2021 to 2027. The dominant revenue share is pertaining to host of factors including high incidence of genetic disorders and growing demand for minimally invasive genetic testing across the country. According to the Centers for Disease Control and Prevention (CDC), around 6,000 babies in the U.S. are born with Down’s syndrome and this condition affects at least 1 out of every 700 babies. Rising cases of pregnancy in late years, i.e. after 35 years increases the risk of giving birth to an infant with chromosomal anomaly. Over 80 percent of the children suffering from trisomy 21 or Down’s syndrome condition are given birth by mothers aged over 35 years. These adverse events along with rise in other genetic factors are anticipated to drive the acceptance of prenatal and new-born genetic testing in the country.

Germany prenatal and new-born genetic testing market is slated to expand at a CAGR of 11.8% and will cross USD 508 million by 2027 impelled by the rising preterm birth rate, high maternal mortality, and growing prevalence of chromosomal anomalies. According to a published report, the number of infants born preterm was 66,730 in 2017, in Germany. This constitutes to 8.6% of the total children born in the year. Furthermore, over 80,000 people were suffering from cystic fibrosis in Germany, with the condition affecting every 1 individual out of 3,300. High incidence of genetic disorders, and congenital abnormalities are projected to fuel the demand for prenatal and new-born genetic testing, thereby fostering the industry progression in Germany during the forecast timeline.

Some of the major companies operating in the prenatal and new-born genetic testing market are Ariosa Diagnostics (Roche), Berry Genomics, BGI, Biorad, Illumina, Laboratory Corporation of America, Natera, Qiagen, Sequenom, Trivitron Healthcare and Verinata Health among others. These major participants emphasize on strategic initiatives including collaborations, acquisitions, new product launch and commercialization for market development. Moreover, these firms heavily invest in research and development that enables them to introduce innovative products and garner maximum revenue.

Prenatal and new-born genetic testing market research report includes an in-depth coverage of the industry with estimates & forecast in terms of revenue in USD from 2016 to 2027, for the following segments: